Did the Seattle Area’s Regional Task Force on Homelessness Accomplish Anything? 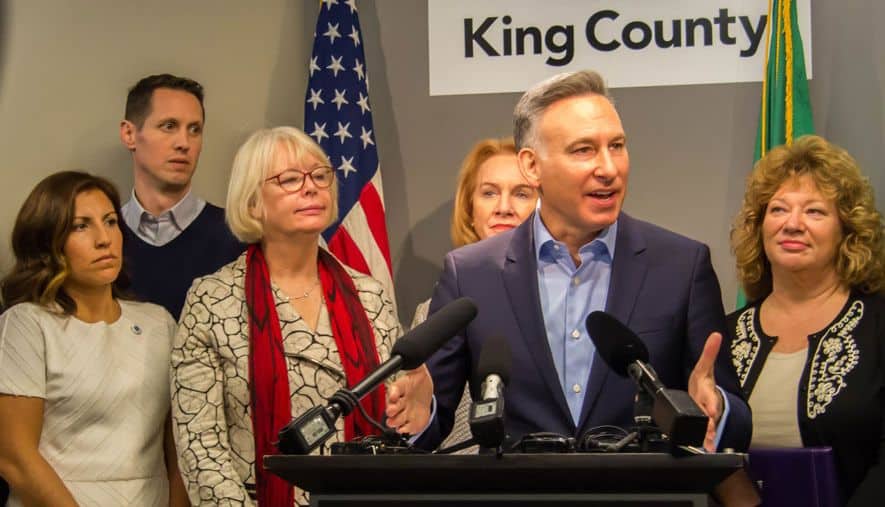 Last Friday marked the long-awaited, and final, meeting of the One Table regional task force on homelessness—a group of political, nonprofit, business, and philanthropic leaders formed last year to come up with an action plan to address the root causes of homelessness in King County.

Did they do it? Not exactly. One Table’s final work product—a list of recommendations and general timelines (“within one year,” “in 3-10 years,” etc.) with no dollar figures or chains of responsibility for implementation—hasn’t changed substantially since April, when the group last met to discuss a set of “recommended actions.” Those actions include things like funding long-term rental subsidies, expanding opportunities for behavioral health jobs for people of color, creating training programs for high-wage jobs aimed at vulnerable communities, and expediting permits for affordable housing.

With that in mind, here are three key takeaways from the eight-month One Table process.

1. Nothing to see here

Several media relations folks mentioned to me that they didn’t really publicize the final One Table meeting because, frankly, there wasn’t much news, and that was evident from the opening remarks by task force co-chairs King County Executive Dow Constantine and Seattle Mayor Jenny Durkan.

Constantine touted the fact that he was moving up the timeline for issuing $100 million in housing bonds that will be paid back by future proceeds from the county’s hotel/motel tax, which will make the money available slightly earlier but does not represent new funding. (Those funds can only be used for “workforce housing” near transit stops, so it won’t directly impact people living unsheltered or in deep poverty anyway).

And Durkan, whose “deal” with Amazon on an employee hours tax that would have brought in $75 million a year for housing and shelter fell through almost instantly, touted her innovation advisory council—a group of tech companies that will advise the city on homelessness, but have not committed any funding to implement whatever “solutions” they come up with—as well two upcoming Pearl Jam charity concerts and the potential for building modular housing.

None of this was news, and it set the stage for a two-hour meeting where basically nothing was announced.

One Table members broke up into small groups—that is, many small tables—to discuss “root cause” areas including affordable housing, behavioral health, criminal justice, child welfare, and employment. They had half an hour to come up with a list of “solutions.” I sat in on a table that included Plymouth Housing director Paul Lambros, Seattle Housing Authority director Andrew Lofton, and Chief Seattle Club director Colleen Echohawk.

This, they said, could include increasing the federal low-income housing tax credit (not likely given the current Administration’s mission of dismantling HUD and federal programs that benefit the poor), providing incentives for banks to fund construction and ongoing maintenance of low-income apartments, and making it clear to the public that, as Gates Foundation program officer Kollin Min put it, “there’s a direct correlation between the lack of housing and homelessness.”

Other groups came back with the same conclusion: Preventing homelessness and preserving existing affordable housing were important, but the region just needs more funding for housing. A similar conclusion emerged out of the groups focused on behavioral health: Without money for mental health care and substance abuse treatment, and funds to build housing for people when they get out of treatment so they don’t end up right back where they were, addressing “root causes” will be impossible.

“Ultimately, the need is housing and money,” a report back from one of the behavioral health tables concluded.

It’s pretty clear that for all the lofty talk of “regional solutions,” the leaders of the One Table task force remain starkly divided over what will constitute the right solutions for different parts of the county and who’s to blame.

Auburn Mayor Nancy Backus, the third co-chair of the One Table initiative, expressed support for a plan that involves forcing homeless people “who refuse treatment” into detox using a state law designed to allow family members to intervene on behalf of people who pose an imminent threat to themselves. That plan was outlined in a July 20 letter to One Table leaders from Backus and Bellevue Mayor John Chelminiak, Kent Mayor Dana Ralph, Kirkland Mayor Amy Awlen and Renton Council President Ed Prince.

“We know these individuals. We might see them on a regular basis. They’re familiar individuals and they’re not willing to accept help. At some point in time, we need to be able to say, you are going to get help,” Backus said. And she touted a church-run food bank in her city that requires people who are capable of working to “pick up a rag and soap” or clean up garbage as a condition of receiving food.

“The cities outside of Seattle have different needs,” Backus said. “What works for Auburn, what works for Bellevue, isn’t going to work for the city of Seattle, and we have to realize that.”

That is pretty much the opposite of a “regional” approach, and is unlikely to fly with the leaders of bigger governing bodies like King County and the city of Seattle, which tend to balk at ideas like forced treatment and unpaid labor.

What will become of One Table’s recommendations remains unclear. Rachel Smith, Constantine’s chief of staff, told the group that the county has hired consultant Marc Dones with the Center for Social Innovation to “guide our work with expertise” as the county comes up with an implementation plan for the recommendations. For now, One Table’s work is concluded—and an action plan to address the root causes of homelessness remains unfinished.

Erica C. Barnett is a regular contributor at Seattle magazine.