Driving Between Seattle and Tacoma is About to Get Hairier

The joys of road construction season. 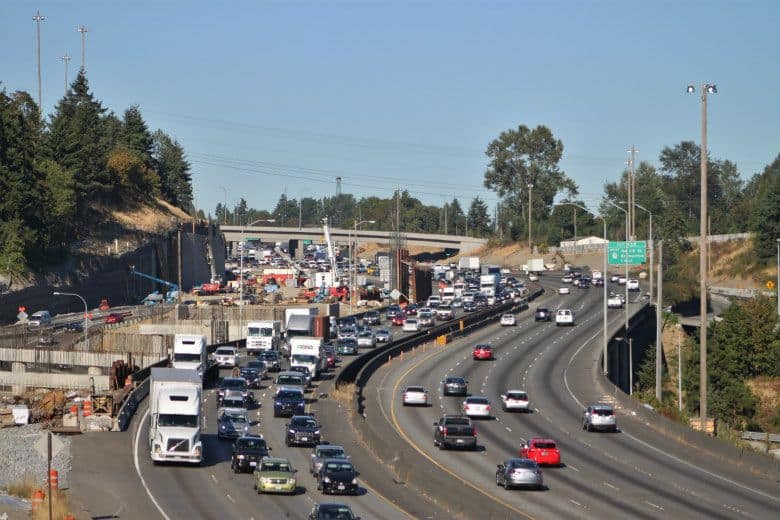 With the Fourth of July behind us, summer is officially here. That means the tacit agreement between Seattleites, Mother Nature and the government is in full effect. In exchange for replenishing our yearly supply of vitamin D, we cope with road construction-addled traffic. The kind of traffic that makes you want to punch a hole through the dashboard and steal a helicopter.

Commuters between Seattle and Tacoma have already noticed the start of an I-5 shift that will affect the roadways for six months. After Uncle Sam’s big day, the highway’s northbound lanes have been funneled to the new I-5 bridge over I-705, clearing the way for work on the southbound lanes.

WSDOT warns this weekend could be the roughest, as one southbound lane near the Tacoma Dome will close from 11 p.m. Friday through 5 a.m. Monday. During the closure, guys with cool vests will rebuild the center median, likely triggering “big backups coming out of King County,” WSDOT cautions.

The weekend work and overnight closures starting July 10 will pave the way (not a construction pun) for a temporary setup that will essentially split the southbound lanes after the Portland Avenue exit. The two right lanes will provide exits to State Route 7, I-705, SR 16 and South 38th Street. The three left lanes will keep cruising south on to Olympia and further. Barring any delays, WSDOT hopes to have this in place by July 14.

Our transportation lords suggest dealing with the construction by planning ahead, allowing extra time to get where you’re going.