Eight relics of Seattle’s past are hidden in plain sight. 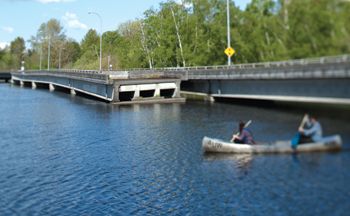 In this town, we spend a lot of time fretting (and arguing and voting) about what the Seattle of the future will look like. Meanwhile, physical evidence of our city’s forgotten past looms all around us. The Underground Tour is an obvious example, but while historically fascinating, it’s perhaps not where you want to be once summer finally arrives (not to mention, this time of year it tends to be overrun with tourists). So we’ve collected a slew of Seattle’s lesser-known ruins—architectural relics that were once notable structures in the city landscape—that also happen to be located outdoors. Exploring these urban sites on a sunny day offers a tangible connection to the past, as well as greater perspective on the cityscape of the future.

Expressway Forbidden
(see photo above) In 1972, the Seattle City Council halted construction of the ambitious R.H. Thomson Expressway—intended to bring traffic from State Route 520 to what is now Martin Luther King Way—in response to public outcry. Unfortunately, the project had already begun, leaving several portions of unfinished highway hanging. Deserted in the north end of Washington Park Arboretum, these “ramps to nowhere” are best seen on foot or from beneath, by canoe or kayak.  From the Montlake Bridge area, take Lake Washington Boulevard south and park in the lot on the left at E. Miller Street, or paddle from Husky Stadium toward the arboretum. 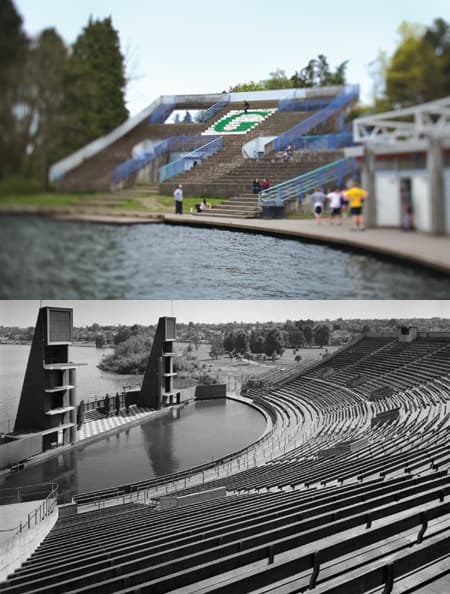 Home of the Aqua Follies, one of Seafair’s first-ever attractions, Green Lake Aqua Theater (1950–1970) provided top-notch aquatic entertainment for locals and tourists alike, from water ballet and high diving to comedy and music acts (such as Led Zeppelin!). Unable to compete with increasing indoor attractions, like the Seattle Center, the Aqua Theater saw its last performances in 1969, including one by The Grateful Dead.  A section of the concrete theater seats can be found at the south end of Green Lake, off W. Green Lake Way N. 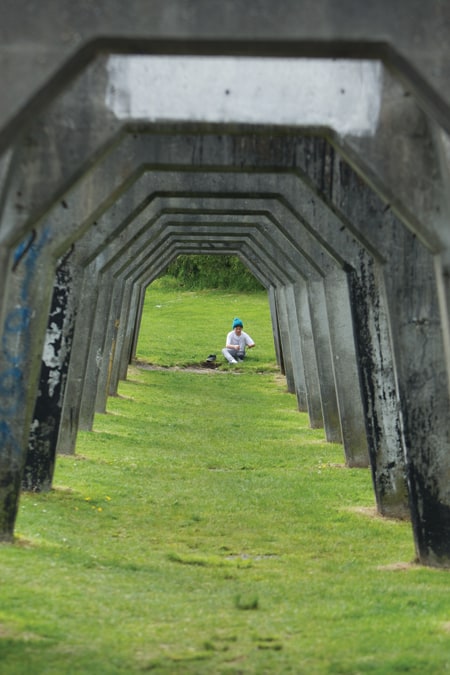 Seattle gas light company (1906–1956) left behind some of Seattle’s most visible ruins: The rusty, hulking, industrial skeletons in Gas Works Park are beloved for their eeriness. But also impressive are the concrete train trestles that still stand near the northeast entrance of the park, where coal cars once rode up and deposited quarry into Northern Pacific Railway trains waiting below.  Park in the Gas Works parking lot (on Northlake Way) and enter the grounds at the east entrance. The trestles are to the west of the play barn. 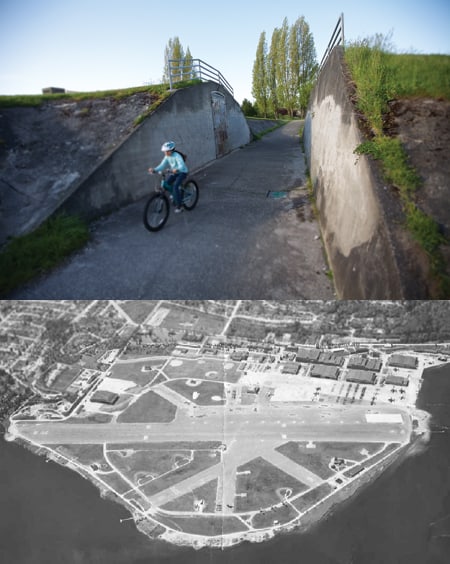 For nearly 50 years (1920–1970), Sand Point Naval Air Station at Magnuson Park served as a U.S. Navy air base, aviation training center and aircraft repair depot, housing more than 5,600 Naval personnel and 2,400 civilians during World War II. The base was deactivated in 1970 and opened as Warren G. Magnuson Park in 1977.  The last vestiges of the once substantial runway were removed during recent efforts to return wetlands to the park, but entrenched munitions bunkers remain.  These military leftovers are best found by strolling the concrete pathways traversing the 350-acre park, particularly near the northernmost parking lot. 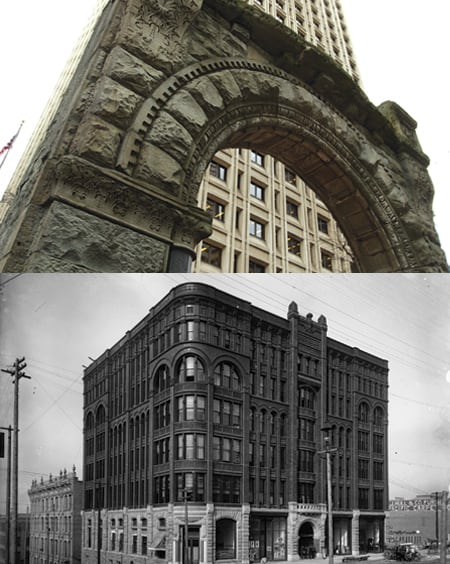 Built in the aftermath of the Great Seattle Fire (1889), the elegant Burke Building (1900–1971) stood at Second and Marion until being demolished for construction of the Henry M. Jackson Federal Building. As a compromise with protesters who wanted the building saved, architects spared fragments of the building for preservation, including the Romanesque arch (below), which now serves as a portal to the newer building, calling to mind a chunk of Stonehenge dropped into busy downtown.  The displaced archway is on the northwest corner of the intersection of Second Avenue and Marion Street. 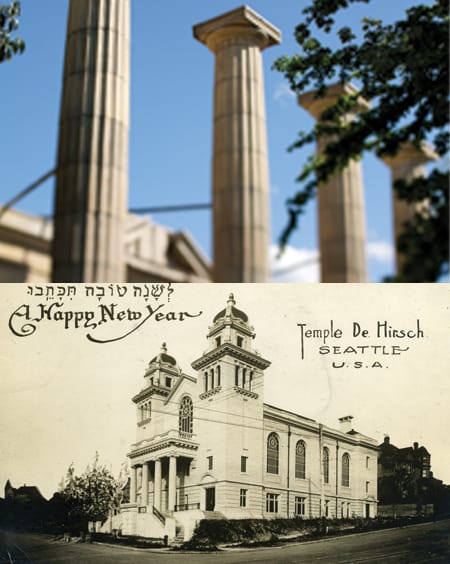 Named for Jewish philanthropist Baron Maurice de Hirsch, Temple de Hirsch (1899–1993) was once an impressive synagogue for Seattle’s Jewish community. Though the original classical structure was torn down (replaced in 1960 by the current, mod Temple de Hirsch Sinai), a few sturdy columns and the original ornate entryway of the Temple Center remain on the Capitol Hill site.  At the corner of E. Union Street and 15th Avenue. 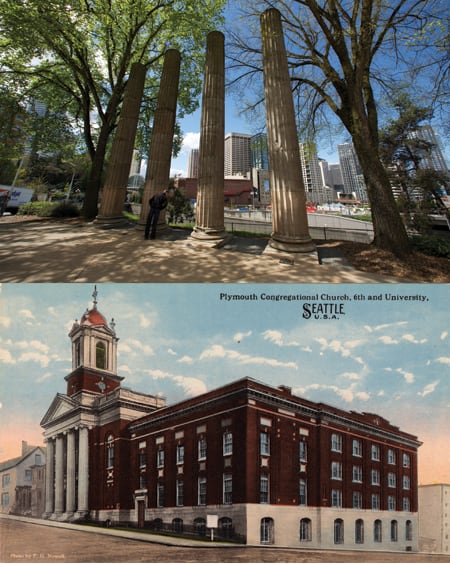 A hotspot for women’s suffragists in the early 1900s, the Plymouth Congregational Church (1891–1966) found itself in the path of progress more than 40 years ago and was torn down to make way for I-5. Late local art collector John Hauberg managed to salvage the four limestone columns that stood sentry at the church’s entrance and have them installed in their current location, Plymouth Pillars Park, overlooking I-5.  At the northwest corner of Pike Street and Boren Avenue.

Pilings of the Past 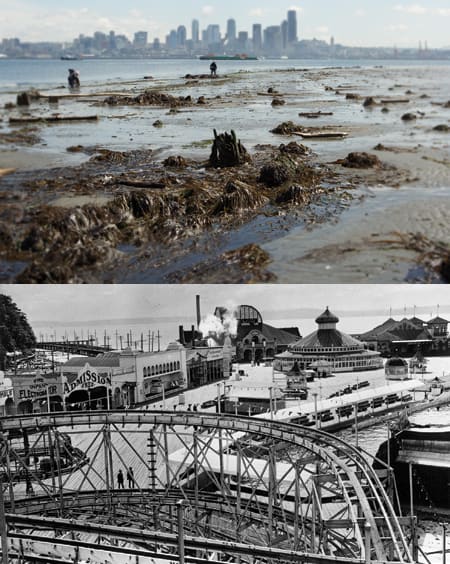 Once called the “Coney Island of the West,” West Seattle’s Luna Park (1907–1913) was our city’s very own pier-perched amusement park, but the Forces of Decency (an actual committee) took issue with the pleasures of the Figure Eight Roller Coaster, Cave of Mystery, Original Human Ostrich and saltwater natatorium, resulting in the park’s closure and dismemberment. Pilings that once supported the park can be seen off Alki Beach at low tide and explored at extremely low tides.  From Seattle, head toward Alki Beach in West Seattle. Look for a viewpoint marked by large anchors, where Harbor Avenue S.W. becomes Alki Avenue.