Is a Former Jail a Good Place to House the Homeless? King County’s Exec Proposes That it Is

The new shelter will include dormitories, storage space, case management, showers and laundry facilities for up to 150 people 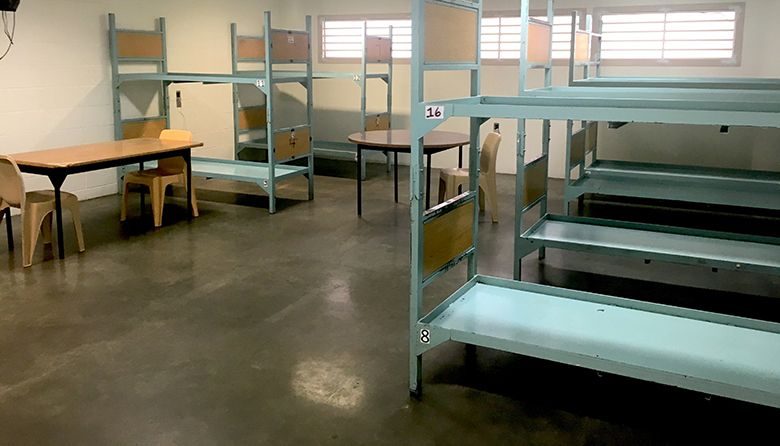 The third floor of the west wing of the King County Corrections Center, at Fifth Avenue and Jefferson Street in downtown Seattle, is accessed through a series of heavy metal doors, each one closing behind visitors as they enter with a loud “ka-THUNK.” Walk through an unused lobby, onto an elevator, and then up a flight of institutional-looking stairs and you’ll find yourself in the old minimum-security living quarters, where a series of rooms—cells, really—look down on a central staffing station; you can imagine guards sitting behind the semicircular counter, keeping a wary eye on the large security mirrors that overlook the ward. In the rooms, rows of narrow metal bunks beds with chipping blue paint and fake wood-grain headboards are scattered haphazardly, each labeled with a different number. The views from the narrow windows are blocked by bars and glazing that makes it impossible to look outside.

The place feels, unsurprisingly, like a jail—which is just one of many hurdles that King County, and its future, still-unnamed, nonprofit partner, will have to surmount before the former jail wing, which has been closed since 2012, can reopen as a 24/7 shelter. County officials hope that will happen sometime before winter.  Last week, staffers from the county’s Community and Health Services department took reporters on a tour of the building, followed by a press briefing with King County Executive Dow Constantine. Here’s what we currently know about the county’s plans for the shelter, as well as a few questions that remain unanswered.

The new shelter will include dormitories, storage space, case management, showers and laundry facilities for up to 150 people. The county hasn’t chosen a partner to operate the facility, which county officials say will cost about $2 million to renovate and $2 million a year to operate. (That funding is included in Constantine’s proposed 2019‒2020 budget, which the King County Council is considering now.) Because the shelter will be open 24/7, people will be able to leave some of their possessions on site during the day and it will give those without daytime jobs a place to be during the day other than on the street.

“As I look around and I see the number of people who are continuing to be out on the streets… and then I see a vacant building right here in the middle of downtown Seattle, it seems to me that we really have a moral obligation to open that up and provide the opportunity for people to get out of the weather and to get the services they need,” Constantine said Thursday. “This is an element of what we need to do. This is not the solution. The solution is the heavy lifting we’ve been doing on root causes, on housing, on behavioral health treatment, on job connectedness, on all of these other root causes. But meanwhile there are people on the streets and that is a humanitarian crisis that we absolutely must deal with.”

King County Housing and Community Development division director Mark Ellerbrook said the new shelter will include indoor areas and a courtyard where clients will be able to spend time during the day, and will be connected to a new day center just a block away, at a county-owned building on Fourth and Jefferson that currently serves as a winter shelter. This type of enhanced shelter, according to a recent City of Seattle report on homeless services, is several times more effective at getting people into permanent housing than basic shelters that only offer mats on the floor, and are primarily a survival tool for people who would otherwise be sleeping out in the elements. “There’s no real opportunity to connect folks with services in that environment,” Ellerbrook said.

Opening a shelter inside a jail building presents what a political consultant might call some challenging optics—and not just because homelessness is not a crime. People experiencing homelessness are more likely than other groups to have past experience in the criminal justice system, and to want to avoid any place that feels like jail. Asked how the county planned to overcome the obvious association between the jail and the shelter, which will not connect directly but will share an emergency stairwell, Constantine responded, “Clearly, this is not ideal … for people who have been incarcerated and may have been traumatized by that experience. This would not be the ideal choice for them to go to, and they don’t have to. Nobody’s going to make them. But for others, it is a very good alternative to being out on the street, to be able to be in a place that is well built, that’s warm and dry and has all of the facilities they need.”

On the flip side, many people who leave jail depart directly into homelessness; prior incarceration is one of many factors that make it difficult for people to find a place to live or a job that would lift them out of homelessness. Downtown Emergency Service Center director Daniel Malone, whose organization is one of several in the running to operate the shelter, said, “I certainly can see it as sort of a swords to plowshares situation, where you could repurpose a facility that previously had really negative connotations into something much more positive for people’s lives. But that said, I think there remains some work to be done that would really examine, ‘Will people who would be the intended recipients of the help use it in a facility like that?’”

Constantine said he sees the new shelter as an opportunity to divert people leaving jail directly to services. “It gives us a unique opportunity for those who have been justice-involved to help them get their lives back on track and not fall into homelessness and then be another person who ends up back in the justice system.”

A lot of details need to be hammered out for a shelter to open by winter, as Constantine has proposed, including who will run it and who it will serve. Constantine said last week that the new facility will house primarily men, but Ellerbrook said the county would try to allow partners, possessions and pets to the extent possible, which means—among other things—that parts of it might be coed. The shelter will be low-barrier—meaning, as Constantine put it, that “this is not going to be a situation where you have to solve life’s problems before you’re offered a safe place to sleep”—but to what extent people with major mental health and addiction issues will be targeted is unclear.

Downtown Emergency Service Center director Malone, whose group runs the Morrison Hotel on Third Avenue across the street from the King County Courthouse, says DESC will be most interested in running the new shelter if it “prioritizes people with longer-term homelessness and more complicated types of situations that would [require] the more robust set of services that we would like to deliver. Ideally,” he adds, “you’d want to build in as few barriers as possible, so making it coed would be in support of that.”