The History of the Seattle Center: A Timeline

The events that shaped Seattle's 1962 World's Fair and, eventually, the Seattle Center as we know it 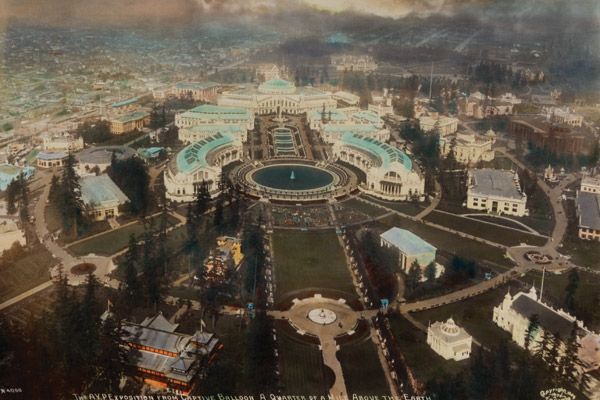 1954: City Council member Al Rochester proposes the idea that Seattle host a world’s fair to mark the 50th anniversary of the A-Y-P.

February 19, 1957: The World’s Fair Commission receives authorization from Washington Governor Albert Rosellini to hold a fair in Seattle in 1960.

March 1957: $7.5 million (roughly $60.4 million in today’s dollars) in funding is approved for the fair by Washington Legislature after being OK’d by Seattle voters.

October 4, 1957: Sputnik is launched by the Soviet Union and becomes the world’s first space satellite, inspiring a new science- and future-focused theme for Seattle’s world’s fair.

July 7, 1958: It is decided that the fair—referred to by the press as Century 21—will be held in the Civic Auditorium (which would become the Opera House), chosen over such other sites as Fort Lawton (today’s Discovery Park) and part of the former site of the A-Y-P Exposition on Union Bay.

November 10, 1958: President Eisenhower presses a button on the Century 21 chronometer upon his arrival at Boeing Field to start the countdown to the fair’s opening.

January 23, 1959: The Seattle City Council agrees to purchase the state’s planned Coliseum (now KeyArena) and turn it into a sports and trade show facility after the fair closes.

March 30, 1959: The plan for the Century 21 monorail is presented to the public, receiving mixed opinions.

June 23, 1959: Groundbreaking ceremonies at the fair site are celebrated with a re-creation (sponsored by Ford Motor Company) of the A-Y-P transcontinental auto race of 1909, with a 1959 Ford, and a new, experimental magnetic levitation “Levicar” reaching their destination at the downtown City-County Building.

September 29, 1959: Seattle voters approve a proposal to remodel the Civic Auditorium into the Opera House.

October 2, 1959: The Washington World’s Fair Commission and Century 21 Exposition, Inc. agree to postpone the fair to the spring of 1962 to attract more exhibitors from industry and foreign nations.

July 22, 1960: The Century 21 Exposition adds “America’s Space Age World’s Fair” to its name after fair officials, weary of being rebuffed in their attempts at gaining world’s fair status from the Bureau of International Expositions (BIE), decide that they were going to brand the exposition a world’s fair with or without the BIE’s approval.

September 12, 1960: A proposition is made for a 550-foot observation tower to be constructed for the fair, inspired by World’s Fair Commission chair Eddie Carlson’s quick sketch of a tower on a cocktail napkin (above).

November 12, 1960: Century 21 is finally and officially recognized as a world’s fair by the Bureau of International Expositions.

February 28, 1961: The Civic Center campus is renamed the Seattle Center.

March 13, 1961: A design by Tokyo architects Hideki Shimizu and Kazuyuki Matsushita is chosen for the International Fountain, and a contract between Century 21 and Alweg Rapid Transit Systems for construction of the monorail is signed.

May 2, 1961: The Federal Aviation Agency approves the Space Needle tower—as long as it is always lighted.

December 5, 1961: The Ford Motor Company, which had been heavily involved in the A-Y-P Expo, agrees to build a pavilion in the last open space of the Century 21 site.

December 8, 1961: An American flag is flown from the top of the Space Needle to mark the completion of its highest point.

February 9, 1962: In a major coup by public relations director Jay Rockey, a picture of the Space Needle under construction is featured on the cover of Life magazine, complemented by a seven-page, praise-filled article titled: “How to Pull Off a Fair.”

April 9, 1962: The Seattle Center is dedicated, and two time capsules are sealed in a cornerstone of the Opera House, to be opened in 2012. Both are inadvertently unearthed in 2002 prior to construction of McCaw Hall.

April 19, 1962: A year after its “Monorail Day” groundbreaking ceremonies, the monorail is officially christened with a bottle of Champagne.

May 1, 1962: The first naturalization ceremony on the grounds is held for new U.S. citizens.

May 4, 1962: Life magazine publishes a second Seattle World’s Fair cover, featuring the monorail and headlined: “Century 21 Opens—Out of This World Fair in Seattle.”

May 15, 1962: “Girls of the Galaxy” show on Show Street (the adult entertainment part of the fair) is closed by fair officials because of excessive nudity.

September 5, 1962: Elvis Presley arrives in Seattle for a shooting for the film It Happened at the World’s Fair. He’s ushered in via a freight elevator located below the “Space Base” gift shop lobby.

October 4, 1962: Plans are submitted to Mayor Gordon Clinton by the fair’s principal architect, Paul Thiry, regarding the layout of the “post-fair” Seattle Center, which include the Pacific Science Center, Playhouse (Intiman Theater), Fine Arts Pavilion (Exhibition Hall), and Opera House (which was extensively remade into McCaw Hall)

October 26, 1962: The Space Needle reopens to the public after the end of the fair.

January 1, 1963: The City of Seattle resumes possession of the Seattle Center after Century 21 Exposition’s lease ends.

June 1, 1963: The fairgrounds reopen as the Century 21 Center, a name that lasts for two years before the campus reverts back to simply “Seattle Center” after much brainstorming of possible names, such as Needleland, Pleasure Island and Pacifica.

August 1971: Festival ’71 becomes the first post-fair event to make use of the entire Seattle Center site; the festival returns the following year and in 1973 becomes Bumbershoot.

December 29, 1981: Groundbreaking ceremonies are held for the Bagley Wright Theatre on the site of Century 21’s International Mall buildings.

October 5, 1986: KCTS 9 moves its operations from the University of Washington campus to the site of Century 21’s Show Street.

April 21, 1999: The Space Needle is named an official city landmark by the Seattle Landmarks Preservation Board.

June 23, 2000: The Experience Music Project (EMP) opens on the eastern side of the Seattle Center on part of the old Century 21 Gayway grounds.

December 31, 2001: Fireworks and New Year’s Eve celebrations at the Space Needle are canceled by Mayor Paul Schell because of post-WTO and 9/11 border security concerns.

August 4, 2003: The monorail is named an official city landmark by the Seattle Landmarks Preservation Board.

February 2007: All-ages music and arts venue The VERA Project moves into its permanent home—with a 362-person-capacity live-show room—in the Northwest Rooms at the Seattle Center.

December 31, 2007: New Year’s Eve fireworks hiccuped as 2007 became 2008, causing citywide consternation as a short opening burst of sparks was followed by four minutes of silence before the rest of the pyrotechnics kicked into gear.

June 25, 2010: The LGBT (Lesbian Gay Bisexual Transgender) pride flag is raised atop the Needle for the first time.

July 21, 2010: The Pacific Science Center is named an official city landmark by the Seattle Landmarks Preservation Board.

October 20, 2011: The new SIFF Film Center opens in the former Alki Room at the Northwest Rooms, just south of the Seattle Repertory Theatre.

Spring 2012: The Chihuly Garden and Glass exhibit to open as part of the fair’s anniversary celebration.

Partial source: The Future Remembered: The 1962 Seattle World’s Fair and Its Legacy, by Paula Becker, Alan Stein and the Historylink staff