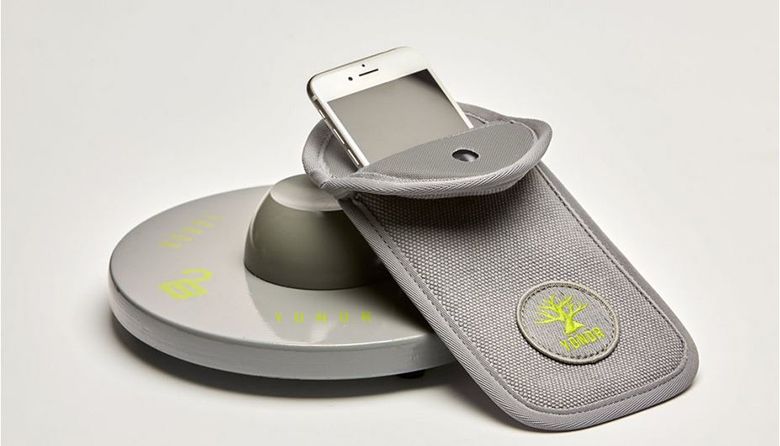 At Bellevue Christian School from 8:20 a.m. until 2:55 p.m. middle schoolers do the unthinkable—unplug from their smartphones for the entire school day, including passing periods and lunch.

BCS middle school joined 20 other Washington state schools in implementing Yondr, a lockable phone pouch. The technology is simple: the user puts his or her phone in the pouch—which is slightly bigger than an iPhone—and shuts it. Once the pouch is shut, there is no way of accessing the smartphone. Users can only open the pouch at a magnetic unlocking station, keeping students off their phones and paying attention.

Designed by Graham Dugoni, the Yondr pouch has been around since 2014, though fairly new to Washington state schools. You may have seen the pouches at concerts, parties or even in March when Aziz Ansari performed at the Paramount.

Thanks to Yondr, principals Blake DeYoung and Mike Olson of BCS have not dealt with a single phone related issue in the BCS middle school this academic year. They’re not alone.

Principal Mike Kleiner of Discovery High School, a local public charter school using Yondr to create phone-free classrooms, has only had two or three phone-related issues with students. Last year it was daily. Prior to using Yondr, Kleiner tried putting a safe in the cafeteria where students would have to check their phones in but said it backfired.

Olson says BCS hasn’t done research into how Yondr has changed students’ academic performance, but the culture shifts were immediately evident: more eye contact, classroom engagement and students interacting with one another at lunch, to name a few.

“What we have seen is once they have enough time and go through that initial detox the vast majority of students tend to think that it is pretty nice,” Olson says.

Eve (BCS requested the use of her first name only), 13-year-old seventh grader, says she has been more present and less anxious during the school day since using the pouch. She no longer texts her friends during school hours but interacts with her peers face-to-face instead.

“Last year I just felt like everyone had their face in their phone or they were looking at someone else’s phone,” Eve says. “There was no engaging conversation. [I] was just sitting their awkwardly being like ‘what do I do.'” Now there is no alternative she says, everyone is engaged.