How Amazon’s HQ2 Will Change Your City: The Good, the Bad and the Bro-y

As the deadline passes for cities to make their pitches, consider what a winning bid could mean for your town. 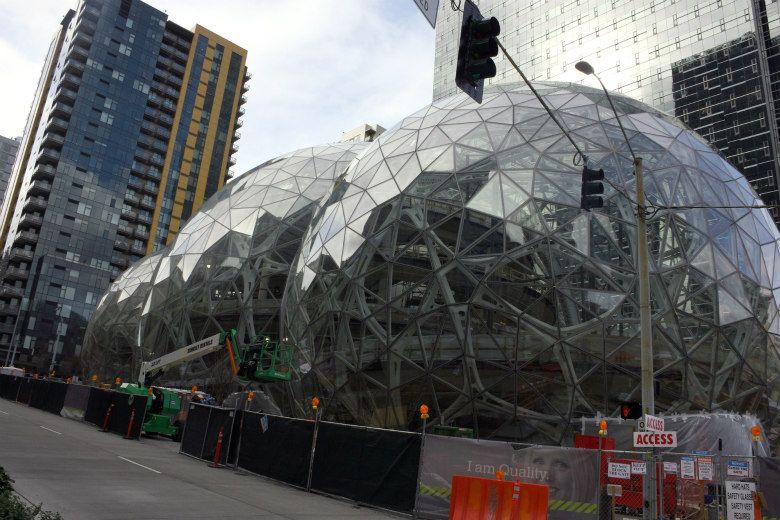 Their cities would experience a Gold Rush-like boom, but with cat cafes and better dental plans. While many cities would happily climb into bed with future intergalactic ruler Jeff Bezos, everything has a price. And we’re not just talking about tax breaks.

The corporate juggernaut will change you, in both good ways and bad. As Seattle magazine columnist Knute Berger recently noted, Amazon isn’t solely responsible for all of Seattle’s changes, even if it’s become a symbol (or scapegoat, in some cases) for it. But it’s hard to overstate its impact on the city.

While Bezos and his posse debate where to make their second home, consider how life will look if Amazon comes to your town.

Dive bars will become an endangered species.
Much has been written bemoaning the death of the Seattle dive bar. As the influx of tech bucks contributes to rising property values and rent increases, the margins on cheap beer look even slimmer. In the worst cases, the working-class temples will be demoed to make way for upscale new apartment buildings. Ironically, many of these fine establishments are immortalized in this guide to Seattle’s best dive bars, available now on Amazon.com.

The value of your home will double, but you’ll be too terrified to cash in.
Almost overnight, that two-bedroom rambler you bought in a neighborhood where people don’t get stabbed very often is suddenly worth $6.2 million. OK, we’re highballing it, but as the dream of owning a single-family home becomes out of reach for regular people, you might feel stuck in a home you’ve outgrown. Sure, selling nets windfall of cash. But looking for your next place, you’ll be thrusted into a cut-throat real estate market where sellers hold all the power.

The names of new high-rise apartment buildings will sound like ‘00s nightclubs.
Emboldened by PowerPoints and the sage advice of Ethan, an entry-level marketing staffer, groups of accomplished adults will conclude that Insignia, Luma and Tilt 49 sound like homes, and not places where people do coke in the bathroom and try to hook up.

“Die yuppie scum” (and variations on the theme) will become unofficial neighborhood slogans.
Most tech workers aren’t nearly as loathsome as Tim Robbins’ character in High Fidelity (if anyone deserved to have his car keyed, it’s him). But people are capable of nasty things when they suddenly can’t afford the neighborhood they’ve lived in all their lives. Automobiles that look a little too nice for the neighborhood or sport company logos will bear the brunt of the backlash, vandalized with cheery slogans like “die yuppie scum.”

Hipsters will flee to [disgusted eyeroll] the suburbs.
Don’t be surprised if you see a young man with a Smiths T-shirt and complicated facial hair unironically scarfing quesadillas at the Bothell Applebee’s. Such is the fate of the exiled king of Capitol Hill once he’s grown weary of devoting 60 percent of his paychecks toward renting a broom closet with access to a shared (but pretty sweet) rooftop deck. On the bright side, the walls are thick enough in the suburban palace he now owns that he’s free to blast Elliott Smith records till the wee hours of the morning.

Newcomers will exhibit odd behavior, like deploying water protection devices.
New arrivals will do strange things like carry umbrellas when it’s raining, without realizing it’s an affront to your way of life. Kindly point them to the nearest Patagonia store.

Starving artists will struggle to find studio space, but will have an endless supply of free bananas.
As the influx of tech-moneyed newcomers contribute to soaring rents, affordable studios within the city will be harder to come by. On the plus side, Bezos’ minions will distribute free bananas to all once a week, shaving upwards of $.87 off their grocery bills.

Dogs will replace novelty coffee mugs as the No. 1 workplace accessory.
Once Amazon got past the whole treating-workers-as-slaves thing, they paved the way for allowing dogs in the office. Tiny puppy bladders will give you an adorable reason for leaving that meeting early.

Overheard conversations will increasingly mix coding vernacular with casual misogyny.
This is the mark of the tech bro, who will infiltrate bars and coffee shops wreaking of the self-importance gained by emerging from Amazon’s grueling interview process victorious.

Once desolate industrial areas will become bustling extensions of downtown.
The omnipresent sounds of jackhammers and credit cards swiping at new boutiques will create a commercial din around HQ2, turning a formerly sleepy neighborhood into a booming auxiliary downtown. Its character can be debated, but the dollar signs can’t. According to Amazon’s calculations, its South Lake Union presence had a $5 billion economic impact during 2014 alone. It’s safe to assume the company would use generous estimates, but even half of that would be enough to build two new basketball arenas.