In the Chinatown–International District, an old form of housing has fallen, taking a piece of history—and affordability—with it 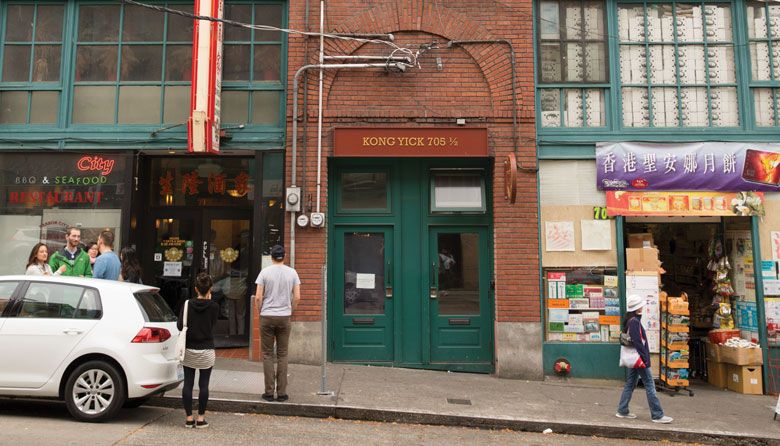 This article appears in print in the December 2018 issue and is the seventh installment in the Neighborhood Walk series. Click here to subscribe.

The hallway on the third floor of the West Kong Yick Building in the Chinatown–International District (CID) is very dark. The light filtering through the dirty windows from the rooms on both sides of the corridor only graze the peeling paint and ragged wallpaper. The electricity is off.

Pieces of pipe, electrical wire, metal clasps and flooring lay in piles in some rooms and scattered along the hallway. Toilets from the communal bathrooms are covered in plaster dust, filled with debris. No one has lived in these rooms for 50 years, not since the owner, the Kong Yick Investment Company, locked the doors in the 1970s, unable to pay for the expensive upgrades mandated by updated Seattle fire and safety codes.

The boom in construction of these hotels in Seattle—known as single-room occupancy hotels, or SROs—started in the 1880s and lasted until the 1930s, according to Wong. A relaxed, middle-aged woman with black hair turning white, she has a ready smile and a friendly but focused bearing. TOUR GUIDE: Marie Wong, whose book on SRO hotels was recently published, inside the West Kong Yick building that once provided inexpensive housing for Chinese laborers

Wong is an apt guide. A professor at the Institute of Public Service at Seattle University with a doctorate in urban design and planning, she has just published Building Tradition: Pan-Asian Seattle and Life in Residential Hotels. It’s a look into the 157-year evolution of Seattle’s Asian community through the lens of the SROs. She has spent the better part of 20 years exploring these old buildings, as well as studying the history of pan-Asian districts around the country.

Walking through the buildings helps to understand what it was like to live in them. “This building would have been teeming with activity,” Wong says. “A living, working, breathing building filled with Chinese laborers.” The SROs—the majority with no kitchens, and a communal bathroom down each hall—once provided short- and long-term housing for miners, cooks, railroad and cannery workers.

They were built for transients, but many Chinese, Japanese and Filipinos set down roots, renting second rooms, raising families. The district was an ecumenical place. Whites, African-Americans and Native Americans also found housing here. In the ’70s, Vietnamese, Cambodians and other Asians joined them.

Today, Seattle doesn’t really have anything nearly as affordable as the SROs were. In recent years, some builders have offered micro-apartments to fill the gap. Seattle City Council member Rob Johnson, who chairs the committee that oversees land use, planning and zoning, says he has talked to young professionals working their first jobs in restaurants or retail; they often tell him that a 300- to 400-square-foot apartment renting for $700–$800 a month would be an affordable option. But a series of zoning changes in the last decade, some prompted by neighborhoods unhappy with the increased density that came with those buildings, effectively closed off that path in Seattle.

Something similar happened to the SROs.

Anti-Chinese sentiments were running high in Seattle in the 1880s. City leaders decided that the crowded rooming houses at Second and Washington in Pioneer Square, which also housed many Chinese, were a public health hazard. As a matter of fact, Wong says, the city passed a cubic air ordinance in 1886: Every person had to have 500 square feet of cubic air space. Officials then went into the buildings to find out if the ordinance was being followed. “In a way,” she says, “the expulsion of Chinese out of Seattle was because they were out of compliance with a legal ordinance.”

The Chinese eventually returned to build the multistory, brick residential hotels in what’s now the CID. But changes in attitude, along with the passage of the city’s Ozark Ordinance, which required expensive new fire prevention and safety upgrades, spelled their demise.

There were about 350 residential hotels, including SROs, in the downtown area in the years prior to the passage of the Ozark Ordinance. By 1980, there were just 77 left; between 1950 and the 1980s, more than 40 hotels in the CID alone were demolished, according to a National Historic Inventory form submitted to the U.S. Department of Interior in 1986. Wong says that by 1974, only 14 remained open. The SRO hotel closures took away 3,000 units of housing from the CID.

In the 1990s, renovations to some of these hotels—including the Milwaukee, the Northern Pacific (or NP) and the Eastern—began, but developers faced a big hurdle: the expense of bringing the old buildings up to contemporary fire, safety and earthquake codes.

Those that are renovated are unlikely to serve the low-income population they did in their heyday. The recently renovated Publix Hotel on Fifth Avenue and S King Street rented rooms for $75 a week as recently as the early 2000s. But today—after $24 million in reconstruction costs—$1,350 will get you a small studio apartment, according to the real estate website Trulia, or a three-bedroom for $3,625. Even when a renovated hotel has low-income housing, as is the case of the Northern Pacific Hotel (NP) at Sixth and Main, there is less housing available. The NP once had 123 rooms; today, it has 65 units.

The building we are touring, West Kong Yick, once had 158 rooms with nine street-level commercial spaces. The Kong Yick Investment Company, one of the oldest operating corporations in Washington, is slowly self-financing the renovation of the building, almost 110 years after it first opened. Wong is president of the company’s board, the only outsider among 175 shareholders, descendants of the original group of investors who started it in 1910. She would like to see a mix of incomes represented, “not just in the neighborhood, but in the building,” she says. But whether there will be any low-income units in the building when it reopens remains to be determined. RISING RENTS: Rent in the Publix Hotel was $75 a week a couple of decades ago; now a studio apartment rents for more than $1,300 a month in the renovated building

While commercial businesses remain open on the street level, the owners of the West Kong Yick don’t know when they will be able to reopen the upper floors. The corporation is still trying to figure out cost and financing of full restoration. Wong says that financing sources will dictate the type and number of units. But without private subsidies or support from nonprofit housing agencies, offering low rents will probably prove impossible. It is a story repeating itself around the historic core. To meet the high cost of renovation, the Chinese business and family groups that own many of the historic buildings have to seek financing outside the district or sell to deep-pocketed developers.

“I would hate to see anything happen that would change the nature of the use of these buildings to where it no longer represents the community, this neighborhood,” says Wong, who worries about the long-term future of the neighborhood.

But changes are already taking place all around.

She says the one- and two-story buildings that are a defining characteristic of nearby Little Saigon are under threat of redevelopment, with several major multistory, multiuse projects in the pipeline; existing structures would be demolished to make way for the new buildings. Small mom-and-pop businesses get chased away and then can’t afford the higher rents in the new buildings. “They don’t come back,” says Wong. It’s the gentrification story that’s told over and over again.

Before we began our tour of the West Kong Yick, Wong pointed out the unoccupied upper floors, once housing members of the pan-Asian community. Visible from outside are remnants of balconies and signs with Chinese calligraphy. Wong says they indicate which families or business groups built or occupied the buildings. I asked her to translate some of the words.

“I don’t know,” she told me. “I’m your quintessential Chinese-American non-Chinese-speaking person. I was born in Des Moines, Iowa…there were so few Chinese. That is probably one of the reasons the Chinatown–International District started meaning so much to me. I grew up in the ’60s in Iowa. There were still a lot of hard feelings left over from the Second World War, the Korean conflict…if you looked a little bit Asian, you were the enemy.” But when she came here and discovered Seattle’s CID, things changed for her, and she wants to be hopeful that a way can be found to protect what she found there—a community.

Future Housing in the Chinatown-International District

There are almost 3,000 apartments, hotel rooms and homes in the Chinatown–International District (CID) today, and at least 1,432 more are set to open in the next five years, with even more in the pipeline. Many are selling at market rate. A CHANGING NEIGHBORHOOD: Small businesses still flourish in the CID supported in part by the area’s current mix of residents living in low and middle-income housing

A new seven-story building being developed by Interim CDA on the site of the old Four Seas restaurant, at Eighth and King, is not one of those. Tom Im, deputy director of the nonprofit social service provider and a developer with deep roots in the community, says the building will have 126 apartments that will rent to low-income residents.

Im says he’d like to see a healthy mix of low-income and middle-class residents in the CID. Their discretionary income could help sustain the small restaurants and grocery stores that provide jobs and maintain the authenticity of the neighborhood. Without that mix, Seattle’s CID could go the way of other Chinatowns across the county, like those in Boston and Portland, where gentrification ate at the edges of the neighborhoods, forced out poorer residents and left behind just a remnant of a once vibrant community.

But low-income people who have lived in the neighborhood are now competing with people who want to live here because high-paying jobs are close by. “That is the dilemma,” Im says. “The reality is that if we don’t keep an eye on it, there will be a lot of changes.”