Amid a national trend of declining membership, Seattle-based SEIU 775 has grown dramatically in members and influence. Can it continue to be a force? 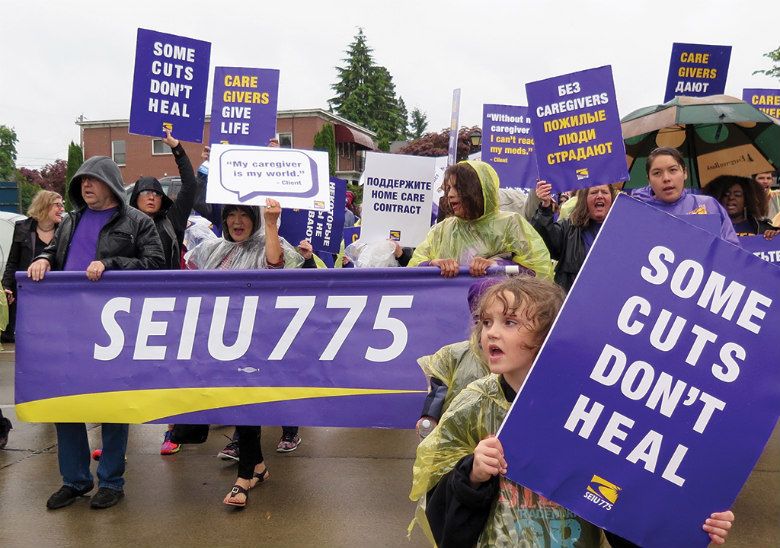 It’s 10:30 on a Friday morning in September, and the crowd at the Washington State Convention Center in Seattle is on its feet, cheering uproariously as the keynote speaker bounds out onto the stage, “I Am the Fire” by Halestorm blaring over the loudspeakers. Many of the people in the darkened ballroom are sleep-deprived, having arrived by bus late last night or in the early morning hours. But you wouldn’t know it to watch them now—hundreds of them, mostly women of color, wearing Service Employees International Union (SEIU) purple and clapping noisemakers as SEIU 775 president David Rolf emerges to deliver a characteristic barn-burning speech.

“When we were born, 15 years ago, if you worked full-time as a caregiver, you were under the federal poverty line. By the end of this new contract, if you work full-time as a caregiver, you will not be under the federal poverty line!” Rolf thunders. “It doesn’t mean we’ve reached the promised land. It doesn’t mean we’re living in the lap of luxury, checking in to the Four Seasons, flying around in our jets. But what a difference the union can make!”

What a difference 15 years can make. Since SEIU 775 was chartered in 2002—after a bruising legislative battle that culminated in a ballot measure, Initiative 775, giving home care workers the right to unionize, and for the union to negotiate with the state on its members’ behalf—it’s grown from a scrappy, unconventional union representing 1,600 long-term caregivers to arguably the most influential labor organization in state and local politics with 45,000 members, including home care providers, nursing home employees and adult day health care workers. (The group also represents about 1,000 workers in Montana.) That growth has happened during a time when unions’ memberships and influence have been declining precipitously nationwide; currently, just 7 percent of private sector workers belong to a union. Today, SEIU’s members contribute 3.2 percent of their paychecks to the union, which uses the money to negotiate for a contract on their behalf and lobby for other pro-worker policies.

In that time, SEIU’s political agenda has also expanded, from an advocate for low-wage, often isolated workers caring for elderly and disabled clients in their homes to a force to be reckoned with on issues ranging from fast-food workers’ wages to Seattle zoning laws.

Rolf has been there through it all. When the 775 chapter was started, Rolf says, home care aides made minimum wage—$7.18 an hour—with no benefits. Although these workers are hired by individuals, they’re paid by Medicaid through a contract with the state, which sets their wages. As individual employees who worked inside private homes, they lacked the ability to organize for better working conditions—until the union came along.

Over time, using tactics such as flooding lawmakers’ fax machines with messages and blocking the door to the governor’s office, that changed, as SEIU 775 won higher wages from the state Legislature, passed an initiative requiring paid training for home care workers and fought back efforts by what Rolf calls “radical extreme groups” to interfere with union organizing.

Sitting in his office in Pioneer Square, the youthful, 48-year-old Rolf recounts war stories from the union’s early years. Like in 2003, when then state Senate majority leader Jim West of Spokane denounced home care workers as “perpetual pathetics,” prompting the union to stage a prayer vigil in front of his house. The following year, when West was running for mayor of Spokane, SEIU 775 sent workers door to door to get out the vote in low-turnout Republican districts helping West win and clearing the way for a more union-friendly Republican, Bill Finkbeiner, to take his place in the Legislature.

“We weren’t necessarily polite, but neither were they,” Rolf says of legislators. “The state had made a set of policy decisions to keep these women in a state of life-threatening poverty as a condition of them being caregivers. Now we had a union. We had some hope. Expectations were raised, and people wanted the Legislature to do the right thing.”

Sherry Byrum, a home care worker whose goddaughter has spina bifida and needs round-the-clock care, has been a member of SEIU 775 since its early days. She says the work that home health workers do is important, but that isn’t reflected in their wages and benefits. “I’ve seen people lose their homes because they couldn’t pay their medical bills when they got hurt on the job,” Byrum says. “A lot of people do [these jobs] pretty much 24/7, 365 days a year.”

Teresa Mosqueda, a lobbyist for the Washington State Labor Council and a candidate for Position 8 on the Seattle City Council (election results were not available at press time), says these tactics have served a larger purpose: forcing legislators to recognize that marginalized workers are professionals and a force to be reckoned with. “I think when those in power can kind of close their doors, we have to figure out a way for our voices to be heard through those doors or through the walls, and I think they have done a really good job of that,” Mosqueda says.

Over the past 15 years, SEIU 775 has expanded its portfolio significantly beyond its original mission, throwing its considerable weight around on issues ranging from public subsidies for sports arenas (2006’s Initiative 91, which the union supported) to former Seattle Mayor Ed Murray’s Housing Affordability and Livability Agenda (in a Seattle Times op-ed, Rolf described opponents’ position as “selfishness raised to an art form”).

Perhaps no battle has so defined SEIU 775 to the public as the fight for a $15-an-hour minimum wage, which began with contract baggage handlers at Seattle-Tacoma International Airport and expanded to fast-food workers in Seattle. It culminated in a joint business-labor agreement to bring a phased-in $15/hour minimum wage to Seattle. (Rolf even wrote a book about it, called The Fight for $15.) After victory at Sea-Tac, where an SEIU-backed minimum-wage initiative passed by a mere 77 votes in 2013, the battle moved to Seattle, where fast-food worker strikes and mass demonstrations led then Mayor Murray to put together a joint business-labor task force that crafted a compromise bill that would phase in a $15/hour minimum wage over several years. Rolf served on that task force.

“The fight for $15 originated in an industry outside our own, but we joyfully embraced it and took it up as our cause,” Rolf says. “And whether it’s housing policy or tax policy or immigration policy or Black Lives Matter or subsidies to basketball teams, we’ve always tried to be a civically conscious organization and to not only be on the cutting edges of the industry and issues in our direct line of sight, but also income inequality as a whole.”