Forestry, climate change and recreation have taken a toll on the mountain caribou 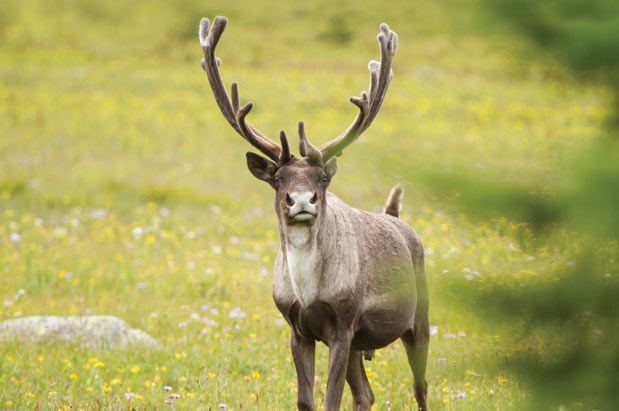 In the far northeast reaches of our state, the bleached antler of a caribou sits quietly on a shelf in the back of a ranger station. Seemingly out of place, the antler is not as incongruous as it first appears. Nearby in the Selkirk Mountains, which form Washington’s borders with Idaho and British Columbia, the southern-most herd of the mountain caribou is taking its last stand.

With fewer than 15 animals left in Washington’s only remaining herd, mountain caribou are one of the state’s most endangered animals. Their status to the north in British Columbia—and throughout their habitat which extends into Idaho and east to the Rocky Mountains—is only slightly less precarious. 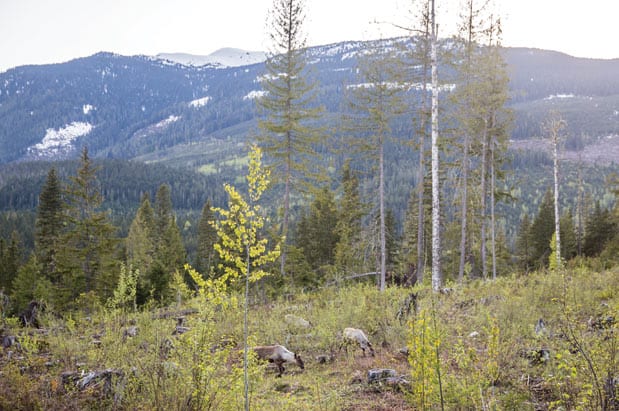 Caribou travel in small groups, up and down mountains, stopping to graze in meadows or clear-cuts. PHOTO CREDIT: David Moskowitz

In the spring of 2009, I wandered into the ranger station where that antler had come to rest in the course of my research for a field guide to wildlife in the Pacific Northwest. But I first encountered the mountain caribou on a muggy summer day a few months later when Washington’s herd, although already in serious trouble, was three times the size it is today. I discovered tracks of a pair of caribou and followed them through dense, buggy forest. Their route seemed random until suddenly their tracks popped out into a postage-stamp-size, flower-studded meadow—a hidden mountain gem. I was hooked and had to know more about these shy and elusive creatures.

For most people, the word “caribou” conjures images of enormous herds streaming across the open Arctic tundra. But the ecotype of mountain caribou (a species subpopulation with distinctive genetic characteristics and adaptations to a geographic location and ecological conditions) that live in Washington are found only in the interior mountains of the Northwest from Washington to central British Columbia. They travel in smaller groups and frequent forests and steep mountainous terrain.

Mountain caribou are slightly smaller, on average, than elk, yet they have much larger feet—built-in snowshoes for traversing the deep snows of winter that blanket their home. They eke out their existence wandering up and down these mountains, feeding off tree lichens and avoiding wolves and other predators by sticking to steep, high elevations, or by spreading out amongst what once seemed like endless forests that covered the lower elevations of their mountain home. 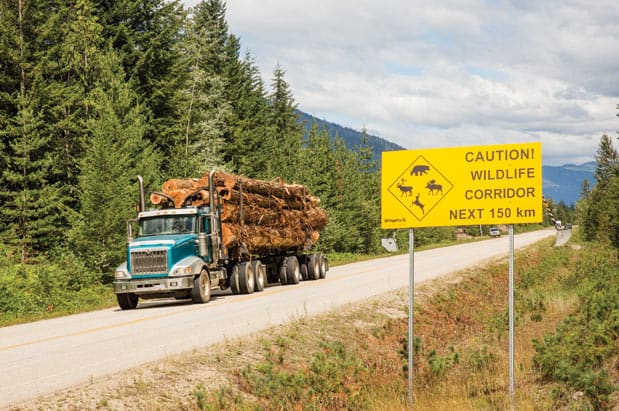 Logging continues in caribou country and though conservation measures have been introduced, it will be many years before ecological conditions return the forest to a state favored by the mountain caribou. PHOTO CREDIT: David Moskowitz

Over the past century, massive changes to these mountains, spurred primarily by western civilization’s ongoing relationship with wood products, have put the mountain caribou at risk. As western civilization’s influence has spread across the globe over the centuries, ancient forests have fallen in its wake. In North America, the industrial timber machine, which once slowly worked its way west across the continent and then north along the west coast, denuding mountain ranges as it went, is finishing its work in British Columbia’s interior mountains.

Greg Utzig, a conservation ecologist from Nelson, British Columbia, has watched these changes unfold over the four decades he has spent studying the relationship between climate, geography and the forests of the Northwest interior. On a sunny summer day in 2015, he and I ventured out to visit a mountain basin in southern British Columbia to search for signs of mountain caribou, close to the Washington border where Utzig recalled finding them in the past. 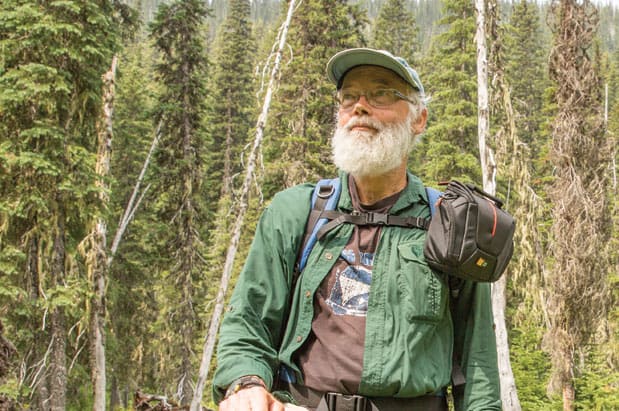 Greg Utzig, Conservation ecologist (above) says: “Mountain caribou basically play the role of the canary in the coal mine for this ecosystem. We are watching them disappear, and they are an indicator that the large intact forests that were here are disappearing.… It’s a sign that the ecosystem itself is beginning to break down because of our impact.”

At 65, Utzig is tough to keep up with on the trail, the result of a career spent exploring the forests of remote mountain ranges across British Columbia. As we hiked, he noted subtle changes in the forest. We first slipped into uncut forest dominated by cedars and hemlocks, and then, as we gained elevation, fir and spruce trees.

Mountain caribou have a unique migratory pattern. Unlike their Arctic siblings, which migrate hundreds of miles back and forth across the landscape, mountain caribou migrate up and down the mountainsides, changing altitude rather than latitude. They undergo this migration twice each year, spending the heart of the winter near the tree line, rather than retreating to low elevations as do most migrating species. Summers are also spent at high elevations, grazing in subalpine and alpine meadows, while spring and fall are spent down in low-elevation old-growth forests, waiting for the seasons to shift in the high mountains.

Their presence in forests from valley bottom to mountain top makes them vulnerable to a number of human impacts on these mountains, from dammed rivers to clear-cuts. Where contiguous old forests once blanketed the mountains, now a patchwork of forests and clear-cuts, bisected by logging roads, defines much of the landscape.

Numerous studies have confirmed that this change has completely altered the predator-prey dynamic between caribou and the native carnivores they evolved with. Moose and deer, once rare in caribou country, have expanded exponentially in clear-cuts, which fragment the old-growth forests that caribou prefer but provide excellent habitat for deer and moose. Wolves and mountain lions follow deer and moose into the mountain caribou’s home. With less forest and more predators, caribou numbers have been decreasing. 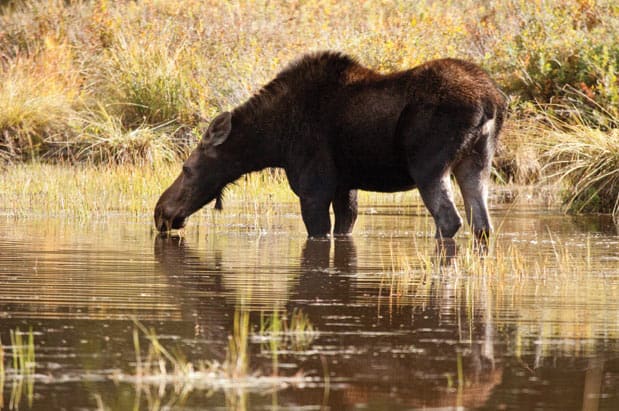 Environmental changes have negatively impacted the mountain caribou, bringing moose into caribou country; the moose have been followed by predators including wolves. PHOTO CREDIT: David Moskowitz

Humans are also increasingly invading caribou country in winter—most notably on snowmobiles and via British Columbia’s extensive heli-ski industry. Just the presence of people can displace caribou from their favored haunts, a particular problem in winter, when travel is difficult and caribou, on a tight energy budget to survive the harsh winter, can’t afford lots of long-distance relocations.

At the top of the basin, Utzig and I searched for caribou along forest trails used by various animals. In a patch of mud we discovered the large, four-toed prints of a wolf, a surprise since the province had killed 11 wolves in this area over the previous winter to protect this herd of caribou. 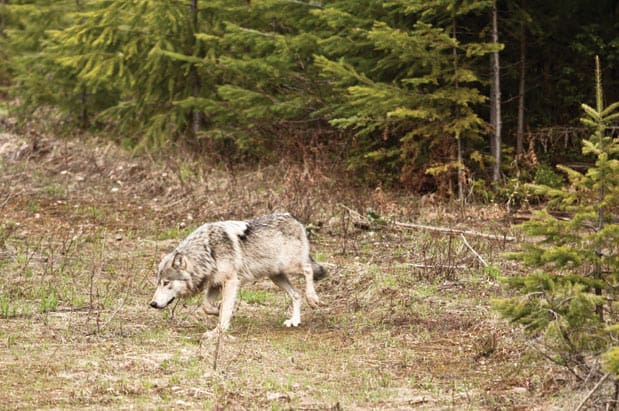 Culling native predators is the most controversial of several last-ditch efforts being carried out to save mountain caribou in places where habitat protection alone doesn’t appear to be working in the short term. While large areas of forest have been protected, and other logged areas will no longer be cut, to protect caribou habitat, it will be decades before ecological conditions return to a preindustrial forestry state, according to the British Columbia’s official assessment of the situation. In the interim, according to Utzig and numerous other scientists, the mountain caribou herd in this part of the Selkirks is unlikely to survive without predator control in the short term. The herd, whose range includes Washington state, dropped from 46 in 2009, to 27 in 2012, to 14 last year.

Wolves are the primary direct cause of mortality in this herd, based on field observations, according to Greig Bethel, public affairs officer for British Columbia’s Ministry of Forests, Lands and Natural Resource Operations.

Utzig notes, “From a conservation perspective, we are very uncomfortable about killing wolves.” But there may not be a better alternative for the survival of this herd. “Wolf numbers need to be controlled if we are going to recover caribou numbers high enough that they can withstand wolf predation.”

The fate of the caribou is not the only thing at stake in the remote Selkirks. These mountains contain the largest remaining tracts of inland temperate rain forest found anywhere on Earth. Protection of more than 8,000 square miles of these forests is tied to the continued existence of mountain caribou under British Columbia’s 2007 Mountain Caribou Recovery Implementation Plan. 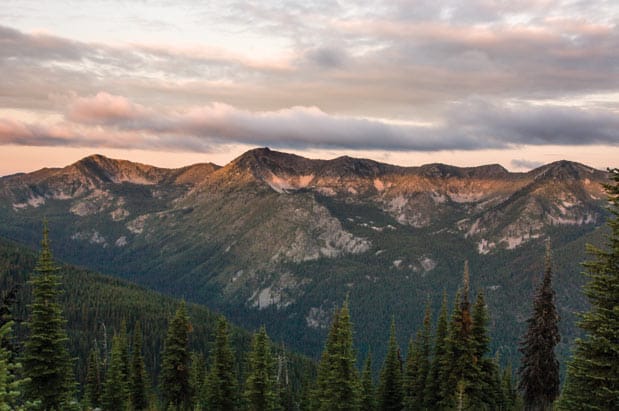 The Selkirk Mountains along the Washington-Canada border are home to the mountain caribou. PHOTO CREDIT: David Moskowitz

“Mountain caribou basically play the role of the canary in the coal mine for this ecosystem,” says Utzig, who was involved in the negotiations for creating British Columbia’s conservation plan for these animals. “We are watching them disappear, and they are an indicator that the large intact forests that were here are disappearing.… It’s a sign that the ecosystem itself is beginning to break down because of our impact.” Utzig notes that the thousands of square miles of forest protected for caribou are providing a de facto refuge for a globally unique ecosystem. “If we lose caribou and [the government] relaxes habitat protections, then, in fact, all species are going to suffer, including wolves, in the long run.”

Conservation measures implemented in British Columbia since 2007 and in the U.S. since the 1980s have been divisive, requiring concessions from numerous groups—including snowmobile clubs, the heli-ski industry and the timber industry—which are now pointing fingers at each other for what’s not working.

Shawn West, general manager and lead guide for Eagle Pass Heliski in Revelstoke, points to continued logging and snowmobilers as the problem. Daniel Kellie, president of the Revelstoke Snowmobile Club, who has helped usher in a number of area closures to snowmobilers in sensitive areas for caribou, believes the snowmobile community has done a good job mitigating its impacts on the animals. He’s concerned about heli-ski operations. Another snowmobiler, whom I met on the trail in mountain caribou country, said that non-mechanized backcountry skiers were the bigger concern. I reached out to numerous members of British Columbia’s timber industry, all of whom declined to comment on the subject on the record. 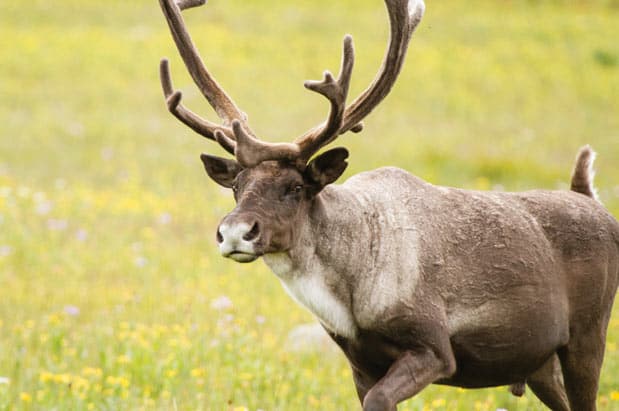 The thousands of square miles of forest protected for caribou are providing a de facto refuge for a globally unique ecosystem. PHOTO CREDIT: David Moskowitz

Meanwhile, logging of old-growth rain forest continues in some mountain caribou habitat, and predator control efforts (primarily targeting wolves) initiated in British Columbia have fractured the coalition of conservation organizations that negotiated for the protections in the first place. On top of all of this, climate change models predict further huge upheavals in this forest ecosystem, including increased rates of wildfires. Taken all together, the fate of the mountain caribou is unpredictable at best, very grim at worst.

Utzig and I found no signs of caribou on the day we searched. My first sighting came a few days later, 200 miles to the north where I was camping in the mountains. I woke at first light and discovered fresh tracks of several caribou right outside my camp. I slowly walked in the direction the animals had gone. Coming over a rise, I came face to face with a bull caribou grazing in a clearing.

I spotted him a few moments before he detected me. It was midsummer, and his branching antlers were still growing, covered in velvety fur. I thought of the antler I had seen in the ranger station as I watched the caribou clip some grass and chew. Soon after, he picked up my scent, looked up, then turned and slowly disappeared into the dark Northwest rain forest. Perhaps one day someone wandering through the woods might discover his shed antlers…or perhaps he might just disappear into history.