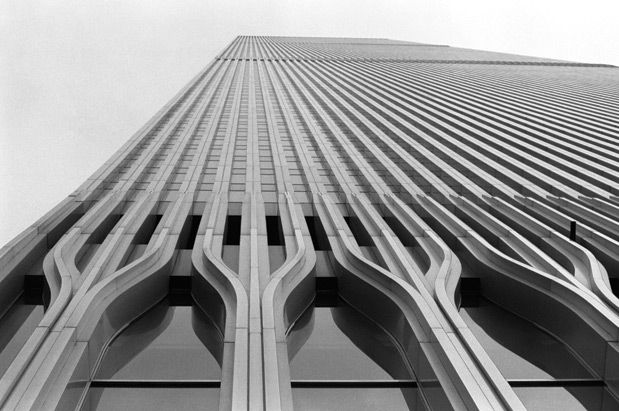 Most Seattleites walk or drive past the Space Needle and the other major buildings at Seattle Center without giving much thought to who designed them. But these structures, including KeyArena and the Pacific Science Center, are the lasting architectural legacy of the Century 21 Exposition, better known as the Seattle World’s Fair. In 1962, some of the Northwest’s most important architects—Paul Thiry, Paul Kirk, John Graham Jr. and others—came together, along with University of Washington alum Minoru Yamasaki, to present what Thiry called “a world within a world.”

With the exception of architecture groupies and history geeks, however, most Seattleites know very little about the people who made the World’s Fair spaces, what they were hoping to achieve and the other structures they went on to design. As we mark the 50th anniversary of the World’s Fair, we shine the spotlight on its space-age architectural legacy.

CITY SHAPER
Victor Steinbrueck
Of all the contributors to World’s Fair architecture, Victor Steinbrueck probably has the most name recognition, if only because a park next to Pike Place Market bears his name. But Steinbrueck made a crucial contribution to something most of us see every day: the Space Needle’s arced legs. The design for the Needle started out like a Tootsie Pop, a quick sketch doodled by Seattle hotelier Eddie Carlson, the chair of the commission planning the fair, who thought the event needed an over-the-top symbol to match the grandiose “Century 21” name and its “man in space” theme. Engineers, however, worried that a ball on a stick would topple over in an earthquake. A 1935 graduate of the UW’s architecture program, Steinbrueck solved the stability problem with three columns pinched about halfway up, a shape local historian Walt Crowley labeled “wasp-waisted.” But Steinbrueck didn’t earn his place in Seattle’s pantheon until almost a decade later, when he fought to preserve Pike Place Market from demolition. In many ways, it was Steinbrueck who begat the Seattle icons recognizable to people from outside city: the charming, European-style Market and the graceful upward sweep of the Space Needle. Seattle residential architect John Ridley had a hand in the Space Needle’s final look (primarily the “double decker” effect of the crown), but top billing for the Space Needle design goes to local architect John Graham Jr., who was also the first American to design and patent a rotating restaurant. (He filed U.S. patent number 3125189 in 1961—using drawings for the Space Needle’s Eye of the Needle restaurant to illustrate the design—and was awarded the patent in 1964.) This wasn’t his first revolving restaurant. Graham had previously built one—the first in America—atop the Ala Moana shopping center in Honolulu. After the success of the Space Needle, Graham’s buildings tended to soar skyward, including several high-rises now integral to downtown Seattle. His firm designed the funky “hair curler” tower for 1969’s Washington Plaza Hotel (now the Westin Hotel), adding its twin tower in 1982; the 37-story Henry M. Jackson Federal Building (1974); the Bank of California Building (1974); and the Sheraton Seattle Hotel and Towers (1982).

Graham is also remembered (for better or worse) for inventing the suburban shopping mall. He designed Northgate—which opened in 1950 and is notable for being the first American shopping center called a “mall”—as two long rows of stores with entrances facing each other, connected by a covered pedestrian walkway. The World’s Fair’s principal architect, Paul Thiry, incorporated the inward focus of Graham’s shopping mall concept when designing the grounds. Paul Thiry’s penchant for remarkable roofs is evident in the Colieum, 1962, and other local icons such as the Mercer Island Presbyterian Church, 1961 (below right).
Credit: MOHAI, 1986.5.8131 (top); Daniel Spils (right)

THE MODERN MAN
Paul Thiry
Paul Thiry’s vision for the fair drew from more than 30 years of experience. A 1928 graduate of the University of Washington, Thiry visited the 1933 Chicago World’s Fair and was inspired by the new architectural ideas he saw there (primarily: form should follow function). In 1934, he traveled extensively in Japan and Europe, where he met globally influential architects Antonin Raymond and Le Corbusier. He merged ideas from abroad with what he had seen in Chicago and started building homes in the “International style,” which emphasized simple, cube-like forms, a lack of ornamentation, flat roofs and long banks of windows.

Thiry’s embrace of this style in the late 1930s—well before midcentury modern became all the rage—earned him his colloquial title as the “father of Northwest modernism.” But the World’s Fair planners likely hired Thiry for his experience designing campuses; he had managed projects at the UW, Washington State University, and the Capitol campus in Olympia. He had also designed museums and public buildings: the Frye Art Museum and the Museum of History & Industry in Seattle (both of which have been heavily remodeled since), and the Washington State Library on the Capitol campus.

Many of the futuristic-looking buildings Thiry designed for the fair were destroyed immediately afterward, including the egg-shaped Nalley’s Fine Food Pavilion and the golf-ball-roofed Ford Motor Company Pavilion. The architect seems to have had a thing for unusual roofs, which can still be seen today in local buildings such as the St. Demetrios Greek Orthodox Church (1962) in the Montlake neighborhood, the Mercer Island Presbyterian Church (1961) and the Agnes Flanagan Chapel at Lewis & Clark College in Portland (1972). One of Thiry’s early World’s Fair ideas, in fact, was to suspend a roof over all 74 acres of the grounds. But his most famous roof was also one of his most controversial—the Washington State Coliseum (now remodeled and known as KeyArena), which he designed as a centerpiece of the World’s Fair. His use of huge concrete buttresses upholding a roof with no interior supports were extremely radical for the day. A critic at the time, James T. Burns Jr., called it “quite disturbing—even annoying,” although he said the coliseum’s interior was “breathtaking.”

Thiry’s love of soaring concrete was also evident in a Normandy Park house he built in 1962. The home featured enormous cantilevered concrete supports suspending it out over Puget Sound, and gained media attention in 2010 when it was put up for sale for $1 (the buyer would’ve had to pay to move it elsewhere). With no takers, it was torn down. Also integral to the World’s Fair team was Paul Hayden Kirk—a UW architecture grad and master of regional modernism—who, in the 1950s, earned national press for designing many impressive local homes in the International style. For the World’s Fair, Kirk conceived the Playhouse (now Intiman Theatre) and the sawtooth-roofed Fine Arts Pavilion (which now houses Exhibition Hall downstairs, and the Pacific Northwest Ballet offices and studios upstairs). Kirk’s penchant for long rows of bold parallel lines can be seen in his other local work from the same time period, including the University Unitarian Church in the U District (1959) and Seattle Public Library’s Magnolia branch (1964). ARCHES OF TRIUMPH
Minoru Yamasaki
Minoru Yamasaki, a Seattle native based in Detroit at the time, was one of only two architects from outside of Seattle brought on to the World’s Fair team. (The other was San Francisco-based landscape architect Lawrence Halprin, who designed the fair’s master landscaping plan and later, Seattle’s Freeway Park.) Yamasaki designed the United States Science Pavilion, now the Pacific Science Center. No one created an insulated space better than Yamasaki, who took inspiration from the serene homes and inns of Japan. Writing in his 1979 autobiography, he remembers “the combined feeling of peace and pleasure, [which] seemed to envelop us at once” as he entered a Japanese restaurant. Jeffrey Ochsner, a professor at the UW school of architecture, says Yamasaki was also influenced by a trip to Venice in the late 1950s and the Gothic tracery in the city’s medieval buildings.

These forces coalesced in Yamasaki’s Science Pavilion. Six exhibit halls, painted white and adorned with simplified tracery in parallel lines close together, enclose large pools of flowing water crowned with five arches that resemble the vaults of cathedrals. People called the pavilion a temple to science and technology. “It created a wonderful, contemplative space,” remembers local architect Bill Bain, who worked with Yamasaki. Observers labeled the style “space Gothic,” a term Yamasaki rejected. (After all, the arches are rounded, rather than pointed.) “The narrow, strongly vertical look becomes a motif in his architecture after the late ‘50s,” Ochsner says of the look that is clear in Yamasaki’s other Seattle buildings, the Rainier Square Tower (with its “golf tee” base; 1977) and the IBM Building (1964), both downtown. But it was the Science Pavilion that brought Yamasaki to the attention of New York’s World Trade Center planners. The Twin Towers—whose structural system was derived from the IBM Building—were by far his most famous work, destroyed in the 9/11 tragedy. THE NEXT FIFTY
The Future
By the time the fair closed, nearly 10 million people had experienced the 21st century, as imagined by mid-20th-century Seattleites. Most cultural critics blessed the event (although commentator Alistair Cooke, the future host of PBS’s Masterpiece Theatre, called the expo “a trade fair overlaid with Coney Island”). The fair made money—a rare accomplishment in the history of world’s fairs—and the planners left behind public buildings still in daily use. Besides KeyArena and the Pacific Science Center, the Exhibition Hall and the Food Circus (long known as the Center House) have survived largely intact. The International Fountain (designed by Hideki Shimizu and Kazuyuki Matsushita, winners of an international contest held by the City of Seattle) still draws thousands.

Thanks to the fair’s insular design, however, city planners are still figuring out how to make the grounds more inviting to the general public (beyond once-a-year events such as the Folklife Festival and Bumbershoot). In the original World’s Fair design, the grounds were enclosed (by walls in some places, buildings in others). Ochsner says many alterations have opened up the site (including the Denny Way entrance to the Pacific Science Center, and McCaw Hall’s Mercer Street entrance and large plaza). But a few original design features (such as the back side of the Northwest Rooms) remain as imposing walls. “We’re still faced with how to take a site that’s inwardly focused and turn it into a place that looks outward,” says Ochsner.

Fifty years later, the space continues to evolve. Frank Gehry drastically changed the landscape with his shining and lumpy Experience Music Project in 2000. The previously awkward corridor between the Seattle Repertory Theatre and Exhibition Hall has been opened up into a pleasant plaza. The Center House is undergoing a massive makeover—adding local food purveyors and outdoor seating, and a new name, The Armory. The Thiry-designed buildings that once held the Canada, Denmark and United Arab Republic pavilions, until recently known as the Northwest Rooms, now house (respectively) all-ages music venue The Vera Project, a new screening venue for the Seattle International Film Festival and in the next year or two, will welcome independent radio station KEXP and a proposed accompanying concert space. Not to mention the gigantic new addition to the grounds: Chihuly Garden and Glass, in the space formerly known as the Fun Forest (previously the fair’s Gayway), set to open this spring. And the Seattle branch of the American Institute of Architects is currently holding a design competition, “Urban Intervention,” to determine what to do with the 9-acre space currently occupied by the soon to be demolished Memorial Stadium (the winning design will be announced in May).

Given all the changes afoot, by the time the fair’s 75th anniversary comes around, the grounds may very well be once again bustling—and Seattle Center will be looking toward a whole new future.