Fewer fans packed the tailgating lots ahead of Saturday's Washington-Oregon game. But they came to party. Tailgating before a University of Washington football game is a time-honored tradition; a moment when Husky diehards young and old come together to sip Rainier tallboys and, like they did before Saturday’s chilly night game against University of Oregon, barbeque some duck.

But with a recent uptick in later kickoff times due to the Pac-12’s TV contract with ESPN and ABC, the tailgating scene—especially the largest groups at the E1 and E12 parking lots around the stadium, and the “sailgate” in the harbor—has taken a hit.

“I mean, look at this, we’re missing about fifty boats out here,” said Ken Jones, who’s been a Husky season ticket holder for more than 30 years and travels from Anchorage for every game. “The 11:30 [a.m.] game last week was the most energetic game all season because it was midday. … Us fans past 60, we are facing driving home late at night [with the later kickoffs], sometimes in the snow, and many are just not coming as much. I know season ticket holders who’ve just stopped coming to the games.”

While the blustery weather likely didn’t help last weekend’s turnout, the fact that kickoff times are announced less than a week before the games bring another set of challenges, especially for those traveling to see the games. “The time always used to be 12:30 p.m. so you could plan,” said fan Mark Hanan. “Now you don’t know until six days before.”

One thing’s for sure, the later start times are encouraging fans who do come to party longer. 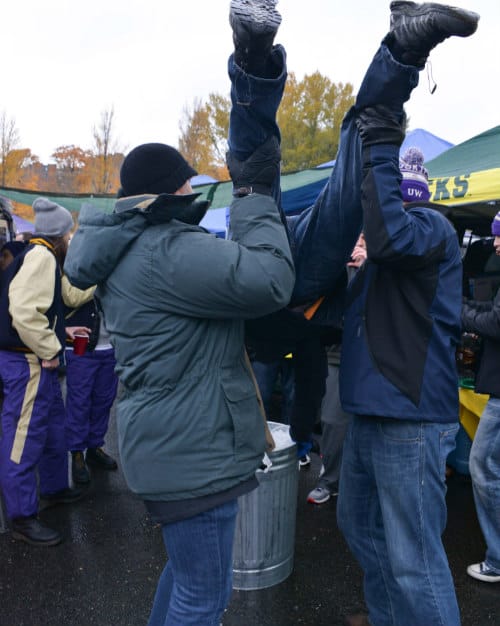 Despite fans having more time to drink before late Husky games, events staff say there haven’t been many issues.

Ben Floyd and Tim Hughes, both from Des Moines, describe how they need “12 hours minimum” to tailgate, which means they come spend the night in the area the night before. At about hour five on Saturday, their crew was huddled over the grill in the 37-degree weather, bundled in thick UW letterman jackets, sipping liquor from red Solo cups. Beer bongs hung in the periphery.

“The late games are much rowdier,” said Jeff Postlewait, from another group nearby. “Once the sun goes down, it gets weird out here.”

Thankfully, the increased rowdiness hasn’t been a cause of grief for the Husky events staff, though staff like Isaiah Martin have noted it. “The later the game, the more partying, for sure. But everyone has been nice,” he said. “There haven’t been any problems this season.”

Ironically, the later games are largely a result of Husky football’s success. After going to the College Football Playoff last year, they’ve become a coveted Pac-12 team for TV prime time. Still, during the Washington-Oregon tailgate, fans didn’t seem to care much about the team’s national TV exposure (the benefits of which which head coach Chris Peterson has questioned).

“I’ve been doing this for 45 years, and these late, late games are really tough,” said Longview’s Dale DuPriest, whose pregame ritual involves crowded purple tents with amplified live music. “The really tough part is the late-night tear down [of our tents and supplies] when it’s cold and rainy. Lots of people in the over-60 generation are very upset because they’ve been doing this [the same way] for years.”

Even younger fans echoed DuPriest’s concerns. “It gets so cold!” said Josh Hergert, who graduated from University of Washington in 2016. “The late starts really [are] the worst. Husky game days were always during the day, so this is completely counter to tradition.”