Organizers asked the man to leave after they spotted him. 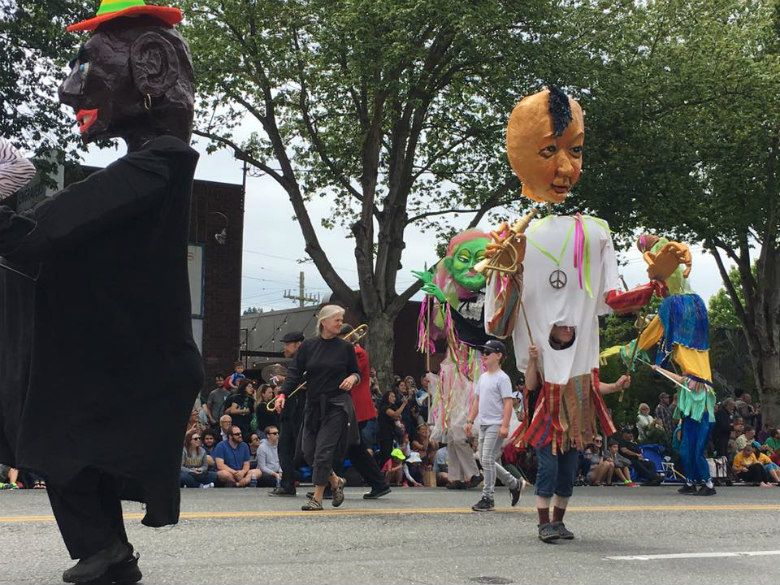 A dark shadow was cast over a beloved Fremont event Saturday, after an unidentified man appeared in the Fremont Solstice Parade donning a towering blackface puppet costume. Organizers with the Fremont Arts Council asked the man to leave after they became aware of him, according to a statement condemning the puppet and apologizing for the “distress” it caused.

“We were disappointed and dismayed that someone wearing a giant puppet that looked like a blackface caricature joined the parade this year,” read the statement posted on the group’s Facebook page. “Our volunteer organization prides itself on being welcoming and inclusive.”

The incident sparked a decision among the Fremont Arts Council to make changes to its event training. In their statement the council said: “We’ll be adding language to our statement of values as an arts organization and clarifying the rules on what art is welcome at the parade. If you’d like to participate in crafting that language we’d be tremendously grateful. … Thank you all for your comments and we vow to do everything we can to never repeat this painful experience.”

But the damage had been done. Many community members are expressing disappointment, anger and sadness on social media.

“I don’t want to live in a city where you see an obviously racist caricature and go, ‘meh’ cause it’s not a big deal to you,” wrote one commenter under the council’s post.

“So interesting how so many ‘allys’ actually saw this beforehand and did nothing for the POC community by remaining silent,” wrote another. “This is why this racism and hatred continues to prevail.”

One commenter noted that the puppet hadn’t simply appeared at the parade; it had been part of the prior night’s events as well.

“I’m a big supporter of the parade and the arts council but someone here is totally full of shit. The night before the parade all the floats came down Fremont Avenue to park at the start of the route in preparation for Saturday. My husband and I were watching from our balcony and were completely baffled and shocked by this thing. You guys claim it was just some random dude who jumped into the parade but he came from the Fremont Powerhouse, was most likely made there, and you welcomed him in the parade.”

The council responded to the comment by noting that the costume had not been constructed at the Power House, an art and community studio, and admitted that “all that said, if we had been more sensitive and observant, this could have been avoided. We are preparing additional training and action steps to make sure that nothing like this ever happens again. If you would like to help us, please let us know at fac@fremontartscouncil.org.”