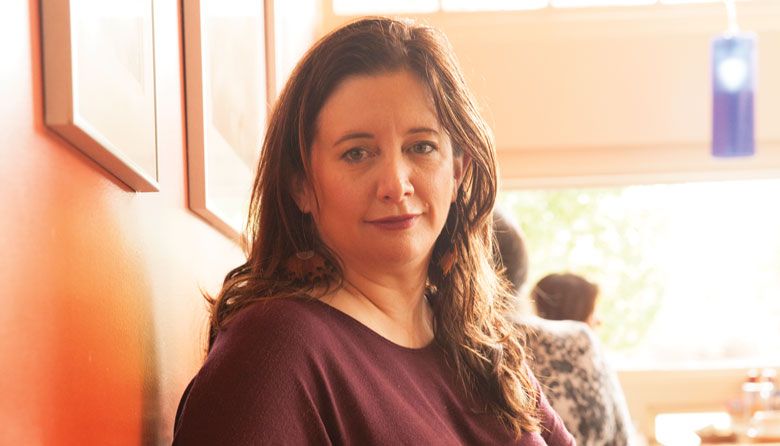 Kristi Coulter knew she had a drinking problem when  she was emptying a full bottle of wine—often more—every night. After years of denial, then earnest attempts at moderation, she finally quit. In her debut memoir, a collection of essays titled Nothing Good Can Come from This (released August 7, MCD x FSG Originals), the Ravenna resident takes a raw and revealing look at her journey to, and after, sobriety.

Coulter, who held various leadership roles at Amazon for 12 years, was often around alcohol. “Tech culture is drinking culture,” she says, one in which alcohol is used to escape everything from everyday work stress to the industry’s systemic sexist culture, and where alcohol is a fixture at work parties, on work trips and in the office. It’s a status symbol, too. “A woman with a single malt scotch is bold and discerning and might fire you from her life if you f**k with her,” she wrote in her breakthrough essay, “Enjoli,” which appeared in the online publication Medium in 2016 and landed her the book deal.

Coulter isn’t new to the literary life: She received her MFA in creative writing in 1994 from the University of Michigan, and has been published online and in literary journals. In February, Coulter left Amazon to focus on her writing full time. This collection—which includes “Enjoli”—unabashedly examines her experiences in an irreverent, amusing style that has drawn comparisons to authors such as David Sedaris, candidly outlining the highs and the lows of life outside a glass, from the annoying things people say to nondrinkers to how much more interesting life can be when one isn’t perpetually numb to it. “I was both thrilled and comforted to be living at ground level, instead of alternately above and below,” she writes.

For those struggling with addictions of their own, Coulter hopes her example will inspire readers to confront the vices holding them back. “I’d love for people to think, ‘What would my life be like after I got rid of the thing that I know I don’t need but [that] I can’t seem to walk away from?’”

Five years sober, Coulter has gained that unique insight through the cathartic power of telling her story. “I never expected to make it to this side of the pool. I never thought I’d get to be here.”

Commercial Power: Coulter’s essay “Enjoli” confronts the idea that “to be a modern, urbane woman is to be a serious drinker.” It was inspired by the ’70s perfume commercial of the same name that promoted an impossible ideal for working women: “I can bring home the bacon, fry it up in a pan and never let you forget you’re a man.”

Coulter Chronicles: Since getting sober in 2013, Coulter has documented her experiences on her blog, Off-Dry.

Fog Lifter: One of Coulter’s goals for the book was to paint a picture of sobriety rather than the lead up to it, as many memoirs do. “My drinking life was so monotonous. I really wanted to spend some time on ‘here’s what it’s actually like to live in a world like that.’ ”