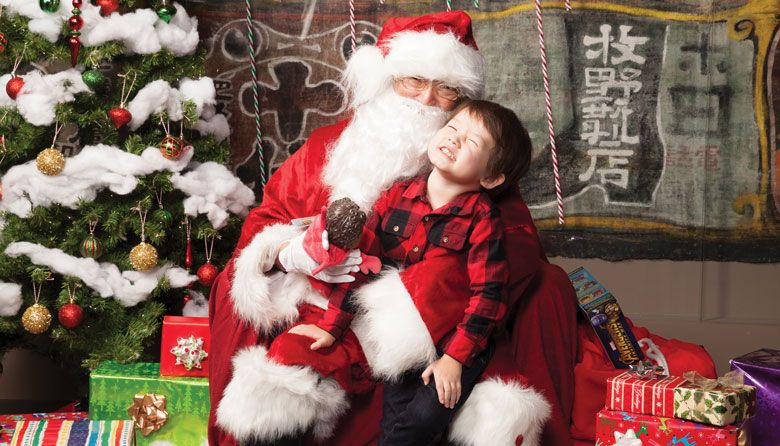 Kerry Taniguchi isn’t your typical Ol’ St. Nick. Where Santa is jolly and round and quick with a ho-ho-ho, Taniguchi is smaller in stature and soft-spoken. And where Santa is traditionally depicted as a Caucasian man, the cherubic figurehead of a Christian holiday, Taniguchi is Japanese-American and Buddhist. Christmas isn’t particularly meaningful to him.

So why is he suiting up as an Asian-American Santa for his third year?

A longtime volunteer at the Wing Luke Museum, Taniguchi says he was reluctant to accept when he was first asked to step into Santa’s boots in 2016. But he couldn’t say no.

“I do it for the kids,” Taniguchi says, explaining the culture in the Chinatown–International District (CID) neighborhood, a close-knit community that has long run on volunteers and neighbors looking after each other. He grew up there, hanging out at the storied single-room occupancy Publix Hotel, which was run by three generations of his family (see page 68 for more on the history of these hotels). He still sees some of the same kids he grew up with—most of them now retirees, as he is.

And then there are today’s kids in the neighborhood, and those of the museum’s regular visitors, the children and toddlers who, he says, “deserve to see someone who looks like them as Santa.”

“I have so much fun with them. They tell me things like, ‘I love you, Santa.’ It’s just precious.”

It may not be the job he was looking to do, but playing the part has brought out Taniguchi’s Santa-like qualities—a generosity of spirit and an irrepressible tenderheartedness for children—in a role that fulfills him, and a need in the community.

Stocking Stuffers
Taniguchi has embraced his role as Santa so thoroughly that he has custom fortune cookies made by the CID’s 100-year-old Tsue Chong Company, baked especially for Santa Day and given by Taniguchi as favors.

A Legacy of Giving
Taniguchi also volunteers for the International District Emergency Center, an organization founded in the mid-’70s by Donnie Chin to keep the neighborhood safe. Chin was murdered in a shooting three years ago, and Taniguchi says much of the work he continues to do in the CID is because of Chin’s influence.

Family Man
Taniguchi is married, with two adult children and two grandkids. Over the decades, his family has insisted he celebrate Christmas with them.