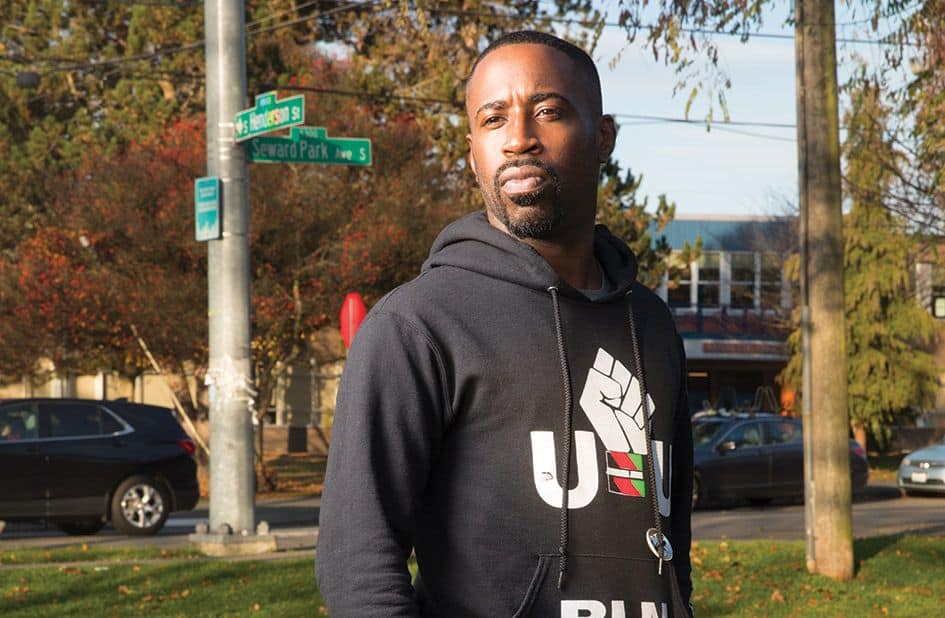 After graduating from Rainier Beach High School in 2004, De Aunt’e Damper left Seattle to find himself. Growing up gay and black in Seattle had led him to a crossroads: His sexuality carried a stigma within the black community, and the gay community left him feeling unseen in his race. Damper returned to Seattle for good in 2018, and just last year made history as the LGBTQ chair for the Seattle King County branch of the National Association for the Advancement of Colored People (NAACP), the first LGBTQ chair of any NAACP chapter. These days, he feels more at home in his identity than ever before and is working hard to build community for others who “don’t feel like they can be counted in.”

“I needed to learn how to accept myself, and leaving town was the only way I was going to do that,” says Damper, a charismatic 34-year-old who speaks with powerful determination. “Owning who you are is the first step to stepping out of your box….That’s where you find your purpose.”

Finding his purpose as an advocate for the underrepresented involved surmounting incredible hurdles—beating addiction and finding the best care after learning of his HIV-positive status, among others—but Damper now leverages his personal triumphs to empower those facing similar obstacles. In his volunteer role with the NAACP, Damper advocates for LGBTQ acceptance within the black community in order to better fight stigmas impacting society at large, work that often manifests in partnerships with outside organizations.

“We have so many leaders in our community that advocate for black issues, but if you’re not advocating for trans and queer lives…you’re not doing the whole job,” Damper says.

As the local organization rebounds from executive-level conflict, Damper aims to make himself and his LGBTQ community even more visible. This month, Damper plans to launch an LGBTQ committee within the Seattle King County NAACP, which will bring even more voices into a conversation about inclusion and belonging.

“If you’re going to give me a seat at the table, you’ve got to make room for all of us,” Damper says.

People Person
Damper is employed as a transitional specialist for the Washington State Department of Corrections, helping incarcerated individuals rejoin their communities.

Passing the Baton
As the adviser for the Black Student Union at Rainier Beach High School, Damper works to empower and support students of color while helping them build community.