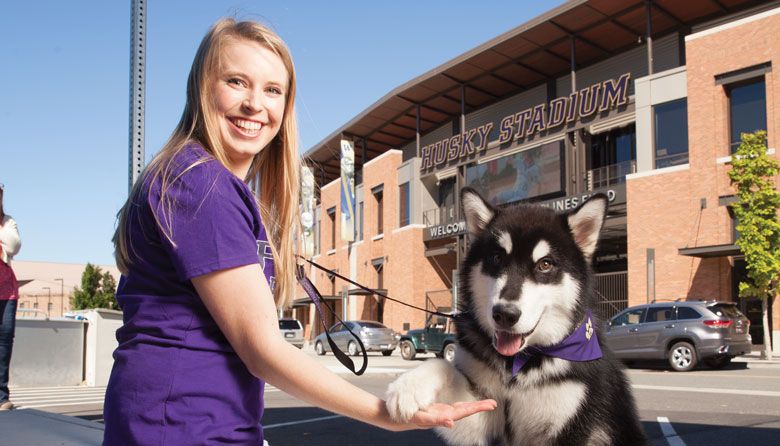 Anne-Lise Nilsen attended every home football game as an undergrad at the University of Washington. But after the spring of 2012, when she was a sophomore, she was never in the stands at Husky Stadium. Instead, she spent game days on the sideline alongside Dubs I, the team’s 13th live mascot, as the Alaskan malamute’s student handler.

Nilsen, who began learning about dog training via a 4-H program when she was 7, was pursuing a degree in psychology (with an emphasis on animal behavior) when she learned the athletic department was seeking a new student handler. Once on the job, she accompanied Dubs to events throughout the year and, of course, to home football games, where one of the mascot’s tasks is leading players onto the field prior to kickoff. After graduation, Nilsen—who has owned dogs throughout her life and entered them in 4-H and AKC competitions, winning numerous awards—continued to work with Dubs and his family as a training consultant. And last January, she took a new job: trainer for Dubs II, another Alaskan malamute, who will take over when 9-year-old Dubs I retires at year’s end.

Nilsen is slowly introducing Dubs II—still a puppy (born on January 4)—to the demands of the job, which include becoming acquainted with the sights and sounds of the game, such as whistles, yelling and big guys running around in pads and helmets. “UW has set up the current mascot program in a way that allows Dubs to be a dog, but also be the ‘top Dawg’ on campus, with his family making sure that he is living in a home full of love,” says Nilsen.

She adds, “So many college students have to leave family pets behind with their families, and it makes their day to interact with Dubs to get their ‘dog fix’! Dogs also embody that image of unconditional love and a childish joy.”

The Canine Advantage
When Nilsen graduated in 2014, she was first in line during the commencement ceremony, with Dubs I by her side. The UW team mascot also is a frequent presence at other UW sporting events, and at campus retirement parties and departmental celebrations.

Nice Retirement
Dubs I will become a normal house pet in January, continuing to live with the same family that, many years ago, applied to take care of him when he first became the team mascot. He’s still likely to make occasional campus appearances, since that’s where his owners work.

Split Loyalty
Nilsen always wanted to attend the University of Washington, even though there are many Washington State University Cougar fans in her family.