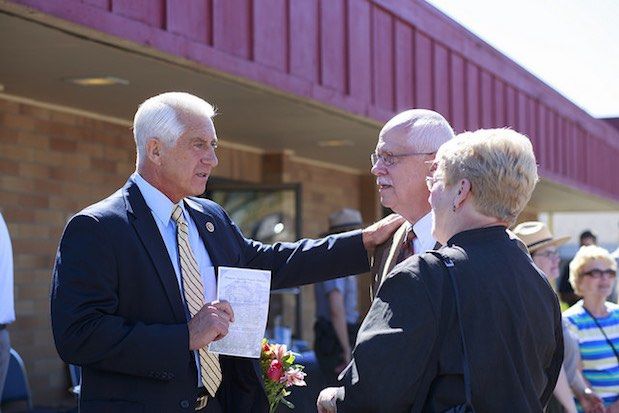 I was highly skeptical of state GOP chair Susan Hutchison’s national convention declaration that Washington is a “swing” state in the presidential election. No one other than Hutchison predicts Donald Trump will carry Washington, and even some of his supporters here, like Seattle developer Martin Selig, have dropped the candidate, partly because of negative pushback from the public. Still, Trump is scheduled to appear for a fundraiser here Aug. 30.

Normally, I would avoid digging into politics too much until after Labor Day, but there is new data worth paying attention to.

GOP Gubernatorial candidate Bill Bryant finally announced last week that he was not going to vote for either Trump or Hillary Clinton, which means that both candidates at the top of the state Republican ticket—Bryant and Chris Vance who is running against Sen. Patty Murray—have joined the NeverTrump ranks.

Another prominent Washington politician refused to endorse Trump last week: Congressman Dave Reichert, a Republican in a safe Republican district. He said he would never endorse Trump, but he did not say whether he’d vote for him or not. Reichert is no Hillary Clinton fan. Reichert’s 8th district jumps the Cascades and includes parts of Kittitas County. I’ve been driving around in Eastern Washington recently, and the only place I’ve noticed an abundance of Trump signs is along I-90 in Kittitas Co. between Ellensburg and Cle Elum, though there is a big white barn along the highway near Thorp painted with a pro-Clinton message.

Hutchison predicted that grassroots enthusiasm for Trump would mobilize the base. But a new Elway poll suggests that isn’t happening.

In results released Aug. 15, Clinton was leading Trump among likely voters 45% to 24%. Sixteen percent of voters said they were undecided, and 6% said they might not vote for anyone for president. Elway respondents also indicated that 50% would be influenced negatively if a candidate for office endorsed Trump. When offset by those who would be positively influenced by an endorsement of Trump, the negative impact of Trump support was still -33%.

In other words, Bryant could have lost more potential votes by endorsing his own party’s nominee than by not endorsing him. Bryant has finally embraced electoral reality, but his reluctance to do so will be used against him by his Democratic opponents. Gov. Jay Inslee challenged Bryant on his slowness in dumping Trump during their first debate last week in Spokane. Bryant said he didn’t want pro-Trump voters to feel “abandoned.”

The bottom line is that while enthusiasm isn’t off the charts for Clinton, Washington is not swinging to Trump and that is influencing other races.

The Elway poll concludes “the race for governor appears frozen,” meaning there has been little movement to either candidates in recent months. Inslee won the primary 49% to 38%, which reflects earlier and more recent polling data. Inslee’s job approval rating isn’t good, but has improved slightly since spring.  And the highly regarded national political prognosticators, The Cook Report, have moved the Inslee-Bryant race from “Likely Democrat” win to “Solid Democrat.” Inslee’s big advantage is King County where in the primary he crushed Bryant 64% to 27%. That kind of margin in the shadow of the Space Needle makes it very tough for Bryant.