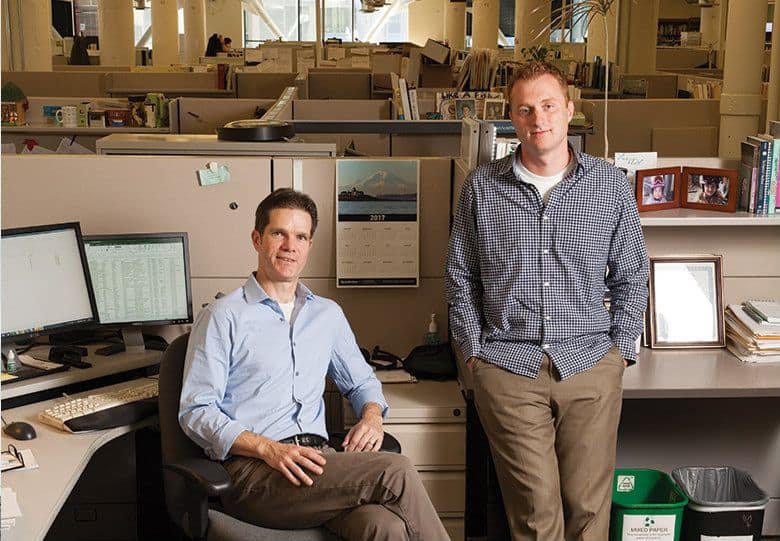 It has not been the best of times for journalism. Traditional print publications struggle to survive as readers migrate to social media and digital news sources. The term “fake news” is now embedded in the national conversation, and our president labels the news media “the enemy of the American people.” Yet, it is in that highly charged environment that The Seattle Times journalists Mike Baker and Justin Mayo published their investigative series “Quantity of Care” last February. Their in-depth reporting, which uncovered questionable practices at Seattle’s Swedish Neuroscience Institute, found that doctors were rewarded for large patient numbers and complicated procedures; that surgeons sometimes ran two operations at the same time; and that Cherry Hill patients underwent surgeries more invasive than available alternatives, although the surgeons argue they were needed, according to Baker.

Baker, 33, came to The Seattle Times in 2014, and by 2015, had shared a Pulitzer Prize with other Times reporters for coverage of the 2014 Oso landslide. The Swedish piece, he says, took months of work and an “immense” amount of resources. “At a time when newspapers have been struggling to survive, I’m glad to be working at a place that continues to see investigative reporting as a priority,” says Baker. Mayo, 48, who has been at the Times since 1998 and was part of an investigative team that won a Pulitzer in 2012, feels investigative and watchdog reporting is more important than ever. “Readers value a credible news source that’s not afraid to hold powerful institutions and people accountable.”

In the wake of the story, Tony Armada, the Swedish health care system’s CEO, resigned, as did Johnny Delashaw, M.D., its top neurosurgeon. State health regulators and the U.S. Attorney’s Office each launched investigations of the neurosurgery unit. In May, Baker and Mayo followed up with an in-depth report detailing the way Swedish neurosurgeons ran multiple operating rooms at the same time, while their patients assumed they were in the room during the entire surgery.

It’s this type of journalism—the old-school Woodward and Bernstein kind—that’s increasingly rare in the age of ratings-focused television news and shrinking newspapers. But thanks to a renewed interest in upholding press freedoms, readership is up at the top national news sites. The New York Times, The Wall Street Journal and The Washington Post, which Seattle’s Jeff Bezos bought in 2013, have all enjoyed subscription and page-view boosts, according to The Economist. Under Bezos’ ownership, the Post has hired more reporters and editors and tripled its technology staff, while breaking news stories that, says The New York Times, “have shaped the national conversation.”