The leaflets and stickers were spotted in Washington and Oregon. 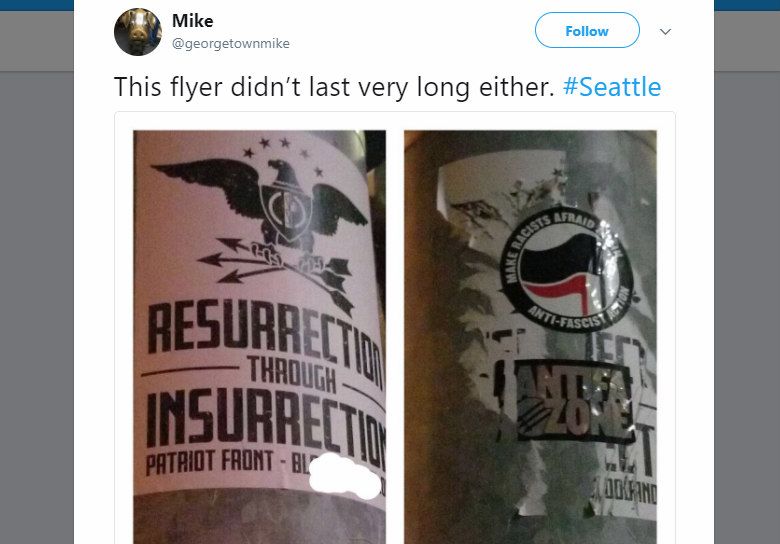 Folks in Portland, Oregon and Vancouver, Washington were upset this last weekend when a far-right group called the Patriot Front left leaflets everywhere, apparently designed to recruit college students. Patriot Front stickers have also been spotted in Seattle. “Am I really seeing Nazi propaganda outside my home?” asked a Portlander who was quoted in Willamette Week.

The WW article went on to report that Portland’s history of far-right groups is long, going back to neo-Nazis and skinhead groups. And it goes back longer. I was reminded of a couple of incidents and messages dating back to the pre-World War II era.

The leaflets in Portland sported an anti-Communist message picturing a bald eagle with a red Communist hammer and sickle symbol in its talons with the message, “Not Here Not Ever.” More people today would probably say that post-Communist Russia is more of a threat to the U.S. than old-style Communism in the post-Soviet period, but this is a message that harkens back to the tactics of the pro-Nazi German-American Bund of the 1930s. The Bund was a militant group aimed at establishing a Nazi regime in the U.S. and it had active groups all along the West Coast, including Portland and Seattle. Pictured above is a Bund flyer touting a speaking engagement by Bund leaders, including its West Coast Bund leader Hermann Schwinn. The Nazi group embraced American imagery, like the flag and eagles while promoting its pro-Hitler agenda.

A business card from the 1930s touts an “Aryan” bookstore favored by the Bund in Los Angeles with its warning of a “Jewish Communist menace.” The Bund was deeply anti-Semitic and it was and is still common that “Communist” and “Jewish” are virtually synonymous in the jargon of far-right circles, Nazi and otherwise. Fascist groups have frequently hidden behind an anti-Communist banner. Recruiting college students here is not new either. Earlier this year, Nazi propaganda posters were put up at the University of Washington. In 1939, the Seattle branch of the Nazi Bund recruited two UW students to pass around anti-Semitic literature on campus.

The propaganda was shipped in by boat directly from Germany to seduce American minds. The students turned against the Bund and one, a journalism student named Richard T. Forbes, testified about the Nazi network to a congressional committee investigating subversives. The students revealed Bund members who worked for Boeing, a major defense contractor. One of their Bund assignments was to put anti-Jewish stickers on the windshields of cars parked on campus.

The current far-right advocates are clearly well informed about historic messages and memes—as well as the technique of disguising their ideology as normal and all-American. That they are showing up on cars and campuses here should be no surprise, even if disturbing.