People with mental illness and/or drug addiction make up a small fraction of our homeless population, yet are among the most visible members of that segment. Can a pilot program get them off the streets for good? 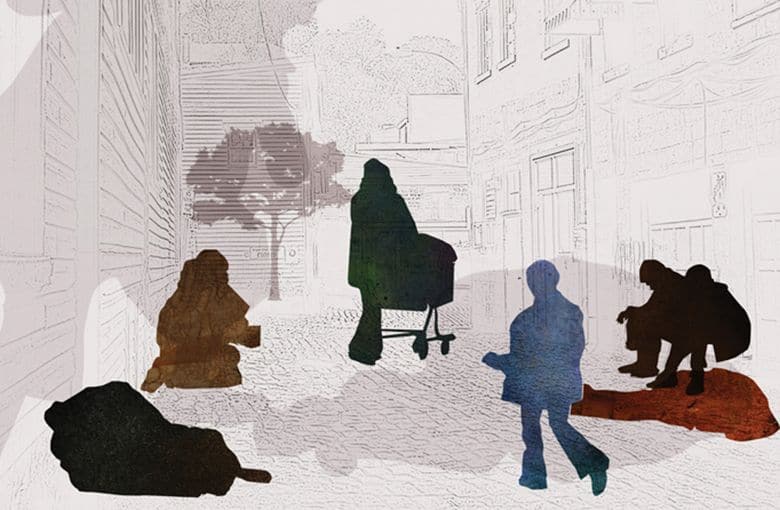 On a day in late spring, David Lucas, 26, is standing in front of Seattle Municipal Court Judge Damon Shadid, waiting to find out if he gets to go home.

Lucas (not his real name) has been locked up in the King County Jail in downtown Seattle for nearly a month. Today, he’s facing a charge of trespassing at a grocery store—the same store where he’s been arrested many times, usually for stealing food. He’s been homeless off and (mostly) on for about a dozen years, and has a chronic mental illness that’s been exacerbated by his habit of smoking meth. Unless he can convince Shadid that he’ll stay out of trouble, he could be going back to jail for a while.

Cases like Lucas’ pose a fundamental question: Is the arrest of people with severe addiction and mental illness who break laws a solution to chronic homelessness? Or is patience and compassion a more effective approach?

Under ordinary circumstances, a judge might look at Lucas’ file—which includes dozens of arrests since 2011—and send him straight back to his cell. But Lucas is no ordinary defendant, and this is no ordinary court session. Like many other clients who sit at the defendants’ table in this courtroom every Wednesday morning, Lucas is supported by a new program that provides case management, legal aid and mental health services to people who, like him, have complex mental health challenges and whose competency to defend themselves in court has been called into question. His advocates this morning include Daniel Garcia, his case manager; Heather Aman, the prosecutorial liaison with the Seattle City Attorney’s Office; and Judge Shadid, who talks at length about the progress Lucas has made.

After a few minutes of deliberation, Shadid decides to release Lucas on the condition that he stay away from the neighborhood where he keeps getting arrested. And when Lucas leaves jail tomorrow, he’ll leave with Garcia, who has been assigned to help him stay on track. He’ll go to sleep tonight not on the street, but in transitional housing, a kind of way station between homelessness and permanent housing. Later in the week, he’ll have an appointment with the occupational therapist who is helping him with the life skills he’ll need to stay out of this courtroom. And his mental health care will be supervised by a team from the Downtown Emergency Service Center (DESC), including a mental health professional who will monitor his progress and adjust his meds if needed.

All of these services are available to Lucas thanks to a $3 million, 18-month expansion of the existing Law Enforcement Assisted Diversion (LEAD) program, a collaboration between law enforcement agencies, the Public Defender Association and Reach, the street-based case management program for which Garcia works. The expansion, which zeroes in on offenders with mental illness, traumatic brain injuries, addiction and other debilitating cognitive conditions, was funded by a 2018 settlement in a landmark case known simply as Trueblood. The settlement created a pool of money for programs to help defendants at risk of being “warehoused” in jails while they await hearings on their competency to stand trial.

When a new client joins the program, any pending charges against that person are put on hold, giving the client time to work with case managers, health care providers and housing specialists. The goal of the program is to reduce criminal activity, but also to give people facing extra challenges the tools to deal with the root causes of their behavior outside the traditional street-to-jail pipeline.

“Historically, the prosecutor says, ‘You’re bad, you should be sentenced to this [amount of time], and the judge agrees, ‘You’re bad, I’m sentencing you to this,’” Aman says. “We’re trying to create a system where we say, ‘I’m interested in hearing about what you’re working on so we don’t have to see you back here.’”

The new funding has allowed LEAD to partner with DESC—an agency serving homeless adults with mental health and substance abuse issues, and disabilities—and Community House, a transitional-housing provider with three properties in North Seattle. Together, they offer wraparound services and transitional housing to clients with complex challenges and extensive criminal histories. (The program expansion also allows LEAD to take on clients charged with offenses that are ordinarily outside the program’s purview, including property destruction, trespassing and interfering with a law enforcement officer.) The new team, which currently serves about 50 clients, includes a nurse, a mental health professional who can prescribe medication, two case managers and an occupational therapist.

Over a period of months, Trueblood case managers build trust with potential clients and get them enrolled in the program, then offer services slowly, based on what a client can tolerate. Often, potential clients have been living on the streets with untreated mental illness for years; they’re reluctant to sign up for services offered by strangers because they’ve been burned by the system so many times. And although many Trueblood clients have substance use disorders, advocates say mandatory, abstinence-based treatment often does more harm than good.

“They’ve been traumatized by systems,” Garcia says of his clients. “They’ve been unjustly discriminated against, with this whole mind-set that [addiction is] a choice. And sometimes people just aren’t ready, especially when they are struggling with mental health. And what [some] don’t recognize is that if a person’s not there yet, it’s kind of a lost resource.”

Hector Herrera, the LEAD supervisor for Reach, agrees that “shoehorning people” into treatment before they’re ready can backfire, sometimes disastrously. “It’s really important to make sure that we define what success is, and that we define it as the achievement of the goals that the clients set out for themselves,” rather than goals someone else sets for them, like completing treatment.

By spending time with clients and letting them define their own goals—whether it’s showing up for appointments, using clean needles or just bathing every few days—the program aims for gradual improvement, not overnight transformation.

“A lot of what we deal with is really just navigating daily life,” says Brittany Meek, the clinical programs entry services manager for the DESC’s Community Outreach and Advocacy Team (COAT). “I have a home and running water, and I still can’t remember to take my vitamins every day. So why do we have these unrealistic expectations of folks who don’t know where they’re going to sleep at night or where their next meal is going to come from?” By using a gradual approach, the Trueblood team works to build trust in the hope that its clients accept help for their immediate needs and slowly begin to participate in some of the program’s ongoing services, with the goal of improving their health and ultimately stopping the behavior that keeps getting them arrested.