Local hospitals are pioneering a new kind of care for chronic conditions. Here’s how “group appointm 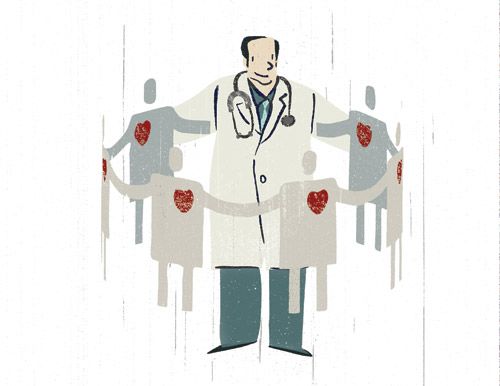 Unlike most people, Nancy White looks forward to her monthly doctor’s appointment. Instead of waiting alone for her doctor in a cramped exam room, the 80-year-old Seattleite checks in with eight other elderly patients in a conference room, where she gets her blood pressure checked, learns how to better control her diabetes—and catches up with a few friends.

Best of all, she and her peers get to spend a full 90 minutes with their personal physician, an eternity in today’s medical environment, in which many doctors rush through back-to-back individual patient visits lasting an average of 22 minutes each.

But White, like a growing number of patients nationwide, is getting quadruple the face time, thanks to group medical appointments. Touted as the wave of health care’s future, group appointments are changing the way physicians and patients view medical treatment. Here’s how they work:

Patients—usually between 10 and 20 of them—gather at appointed times in conference rooms, where nurses record vital signs, administer flu shots and attend to other basic medical needs. Physicians then give educational talks, followed by a lengthy question-and-answer session.

Doctors may also have brief one-on-one discussions with patients regarding prescriptions or specific concerns. The whole thing lasts between 90 minutes to two hours—a huge gain for patients, and still a time saver for physicians. And this kind of efficiency can save money, too, by cutting down on emergency care and streamlining use of hospital resources.

Patients save money, too; some visits, including those at Group Health Medical Center in Seattle, are free as part of the clinic’s patient education programs, while others can be billed to insurance in the same way as a regular office visit. But the benefits, some patients say, go far beyond “regular.”

“I don’t feel like I’m going in to see a doctor who doesn’t know me,” White says of her group appointments. “He gets to know us better by our questions. It’s kind of like I’m visiting a friend.” She has been going to shared appointments at Group Health’s Northgate clinic for several years; she looks forward to chatting with her fellow patients each month.

He says these visits give patients a chance to share common concerns about their ailments with their peers, hear the answers to questions they might never have thought of asking and learn how to better manage chronic conditions. And, though doctors are seeing more patients at one time, they say group visits allow them to develop better relationships with their patients. “It changes how [doctors] think about care for all their patients,” Levine says. “They learn a lot by listening to their patients.”

The number of doctors doing this kind of listening is growing, according to a 2008 survey by the American Academy of Family Physicians, which found that 8.4 percent of doctors offered shared appointments (up from 5.7 percent in 2005).

The Veterans Health Administration began offering shared medical appointments system wide in 2005 to improve clinic efficiency and quality of care. At Group Health, shared visits are used to offer preventive care for patients with an established diagnosis, such as congestive heart disease, sleep apnea and diabetes. Levine, a family doctor and geriatrician, says these visits have an additional benefit: They let patients know they’re not alone.

“Often, people with chronic illnesses feel isolated, but when they come to a group setting, they feel validated. They appreciate that sort of leveling of the playing field.”

During White’s recent group visit at the Northgate Group Health clinic, nine patients met with Dr. David Huntington, a family physician with geriatric training, who led a 45-minute “healthy aging” discussion focused on nutrition. For Huntington, the session was a welcome break from his daily routine of back-to-back appointments, which range from 10 to 40 minutes each.

“This is a different way of seeing patients,” he says. “Group visits offer more chance for social interaction.”

Margaret Thue, 85, who has congestive heart failure and arthritis, took advantage of the meeting to ask Huntington about her recent shoulder pain. She says the sessions have helped her and her fellow patients get to know their doctor better because he isn’t as rushed and spends more time talking with the group. That quantity is adding up to quality, she says: “We see him more as a human being.”

While group visits tend to work well for patients with chronic conditions and the elderly, the concept is gaining popularity among pregnant women as well. Swedish Medical Center, Madigan Army Medical Center in Tacoma and Naval Hospital Bremerton are among more than 200 sites in the country offering group prenatal care via a program called CenteringPregnancy.

“I believe this is the health care of the future,” says Sharon Rising, a midwife and the founder of the Boston-based Centering Healthcare Institute, a nonprofit that trains providers on their Centering model. Rising first piloted the concept in the mid-1990s and has been educating doctors on its benefits ever since. “Think about taking off your white coat and sitting in an open circle listening to each other as equals—that’s terrifying for some doctors,” she says.

In CenteringPregnancy, about a dozen women meet for 10 sessions spanning their pregnancy. They track their own health data, have brief physical assessments and then conduct group discussions with their provider and a cofacilitator.

The concept seems to be working: A 2007 Yale University study of more than 1,000 women found that those in CenteringPregnancy groups were 33 percent less likely to experience preterm birth than other women.

Encouraged by that success, the Centering Healthcare Institute is now testing other group-therapy models—including CenteringParenting and CenteringDiabetes—throughout the country. Mary-Paul Backman, the nurse midwife who coordinates CenteringPregnancy at Madigan Army Medical Center, says the group dynamic allows women (and their partners) to feel more connected to their own pregnancy.

“It really allows women to take ownership of their care.”