The new, eco-conscious seawall is the foundation of the waterfront’s future 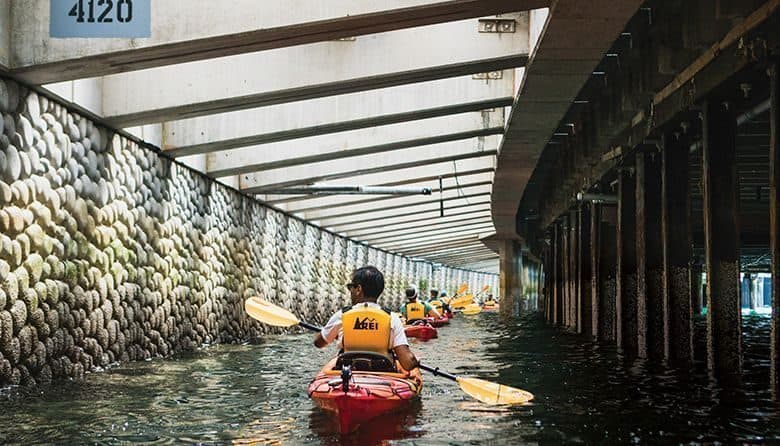 This article appears in print in the March 2019 issue and is part of our Seattle Waterfront feature. Click here to subscribe.

After 70 years of protecting Seattle’s waterfront, the city’s original seawall, completed in 1934, left a lot of room for improvement. By early in this century, city leaders knew it needed to be replaced. The Elliott Bay tide infiltrated cracks in the wall, carrying fill soil from underneath Alaskan Way back into the ocean and creating potential hazards, seismic and otherwise; and gribbles—tiny wood-boring marine creatures—ate away at the timbers that held up the wall. This alarming erosion prompted voters to pass a levy in 2012 for the construction of a new barrier.

The new seawall, finished in 2017, is billed as the foundation of Seattle’s future waterfront, and for good reason. It marks a new era of connection between land and sea. The wall was moved 10–15 feet eastward to accommodate Seattle’s bold vision for the waterfront while improving the coastal ecosystem. According to Heidi Hughes, executive director of Friends of Waterfront Seattle, the original waterfront development damaged Elliott Bay’s intertidal habitat in a number of ways, including harming the salmon migration corridor. The new seawall aims to restore the ecosystem for aquatic life.

There are a number of ways the seawall project has addressed this goal. It incorporates light-penetrating surfaces to illuminate the waters below (important for young salmon), shallow habitat benches that provide hiding and foraging places for sea life, textured surfaces to promote growth of vegetation and invertebrates, and planted native riparian vegetation.

The seawall is a microcosm of the vision for the larger waterfront project: new and improved while fusing innovative design with a respect for Seattle’s history and environment. 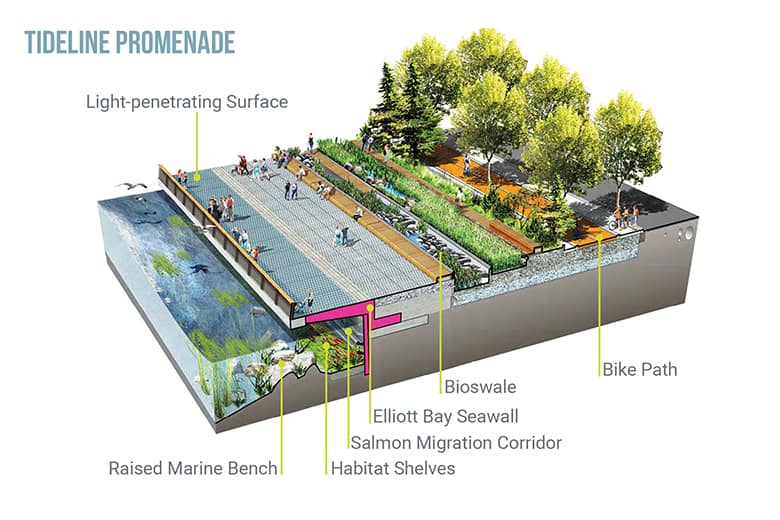 Image by James Corner Field Operations, courtesy of the City of Seattle