People Are Leaving Spin and LimeBikes in Impressively Dumb Places

Some Seattleites are ditching the stationless bikes in vexing locations. 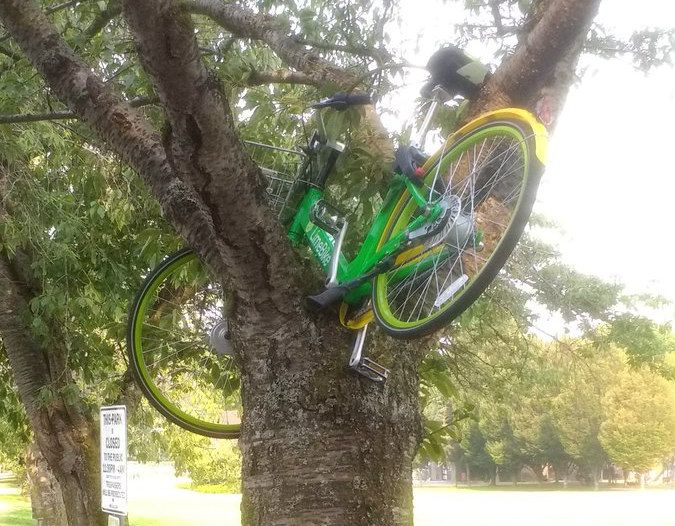 It’s only been a few weeks, but LimeBike and Spin—Seattle’s first stationless bike-share companies—are off to promising starts. Perhaps benefiting from Seattle’s record-breaking dry spell, the two companies collectively saw upward of 13,000 rides during their first week with only 1,000 bikes between them. On Thursday, Beijing-based ofo rolls out 1,000 of its yellow bikes in Seattle. A fourth company, VBikes, has also applied for a permit, meaning there could soon be 4,000 shareable bikes on the streets.

Any program that could potentially ease Seattle’s nightmarish traffic is welcome, but with companies ramping up their fleets through September an important question remains: where are people leaving these dockless bikes when they’re done cruising the city?

The LimeBike and Spin apps both designate appropriate parking locations—such as existing bike racks and open grassy areas—but people are still leaving them in incredibly dumb places. Fortunately the majority of riders seem to use common sense, but these park jobs are real head-scratchers.

If anyone is looking for a @LimeBike_SEA, there are a few available near 4th & Jackson…nice placement. pic.twitter.com/qoY5zngFeY

What were you doing down there?

Current winner for weirdest place to find a LimeBike: in the middle of a huge staircase at Discovery Park pic.twitter.com/5d1TvXpZxb

This bike in Discovery Park might be difficult to ride.

In front of driveways

Dear @LimeBike_SEA, does parking them anywhere include in front of a parking garage door? #Limeing #Seattle pic.twitter.com/u6cwutsR0B 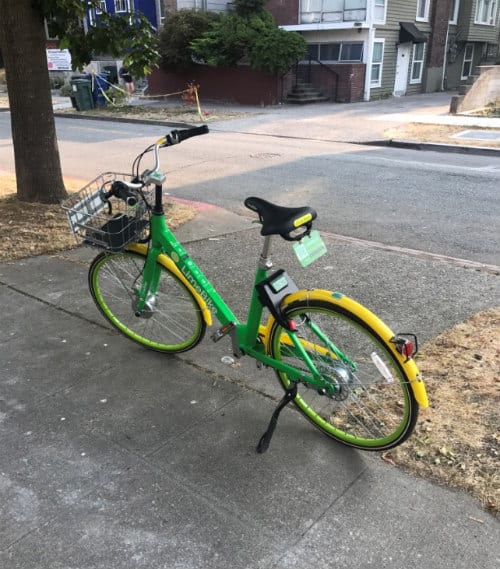 Well, pinning cars in their driveways would reduce traffic…

@LimeBike_SEA my daughter & I can’t decide if someone is trying to save a bike for their next trip or if this is a new kind of like tree. pic.twitter.com/8VLpalgKx7

In the middle of the sidewalk

Keep those in mind who may need the entire sidewalk for wheel chairs or strollers. This is bike parking, not littering.