Is the Port Ducking its Responsibility for Protecting the Sound?

With the prospect of Arctic drilling rigs parked in the Port of Seattle, the city preps for a fight 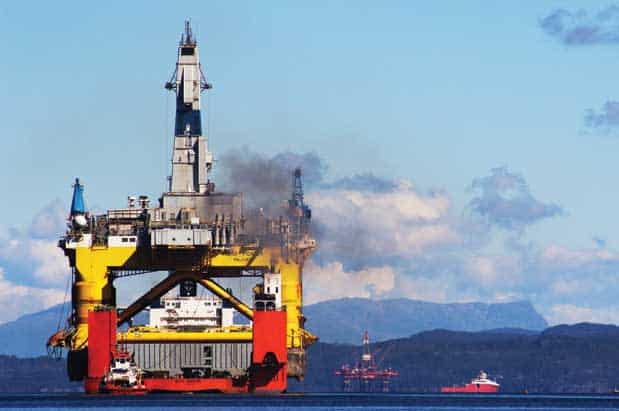 Spring arrived early in Seattle this year. Above average temperatures and dry days were the norm in February. The cherry trees at the University of Washington bloomed two weeks ahead of schedule. Tulips in the Skagit Valley popped open well before the start of the annual April tulip festival. But the pleasure many of us took in the mild weather was tempered by looming concern over the consequences.

With snowpack as low as 7 percent of normal, on March 13, Governor Jay Inslee declared a drought emergency on the Olympic Peninsula; east of the central Cascade Mountains, including Yakima and Wenatchee; and in the Walla Walla region. Five days later, the state Department of Ecology forecast dust storms and wildfires for this summer—only seven months after the state’s worst recorded forest fire destroyed 300 homes and more than 250,000 acres east of the North Cascades.

As local farmers, fishers, and people with asthma and other respiratory conditions worried about how the lack of water will affect agriculture, migrating salmon and air quality, a pair of gigantic Royal Dutch Shell oil rigs began a transpacific journey, bound for the Port of Seattle and from there, the Arctic. How you view this strange weather year will probably influence whether you welcome these rigs to our waters or not.

One of the ships, the Noble Discoverer, is known in Seattle, where it was refurbished back in 2012 for a similar journey. That trip was plagued with problems almost from the outset. On the way north, the 46-year-old ship ran aground, but was rescued and went on to drill and cap a partial well in the Chukchi Sea. On the return to Seattle, the Discoverer experienced a series of malfunctions and failures that were kept secret from Coast Guard inspectors, and which eventually resulted in eight felony charges and $12.2 million in fines and community service payments. The sister rig on that ill-fated venture, the Kulluk, wrecked off an island in the Gulf of Alaska—endangering the lives of the crew and rescuers.

Three years later, the largest petrochemical company in the world aims to drill in the Arctic again. The Discoverer and its new fleet mate the Polar Pioneer would be based at Seattle’s currently vacant Terminal 5 under a two-year, $13 million lease between the port and Foss Maritime, which will manage the site with Royal Dutch Shell as its tenant. The terms of the lease were mostly settled during a six-month negotiation out of the public eye. Once the port commissioners opened up the agreement for public comment in early March, alarm bells rang. A coalition of environmental groups, including Earthjustice and the Seattle Audubon Society, challenged what they call the port’s lack of public process and failure to assess the environmental repercussions of becoming Shell’s Arctic drilling homeport—especially in light of its performance in the region a few years earlier.

“The port is ducking its responsibility for protecting Puget Sound,” said Mark Powell, Washington Environmental Council’s Puget Sound program director. “Leaks or spills from Shell’s Arctic drilling fleet would undermine the hundreds of millions of dollars already spent on restoration of the Puget Sound and Duwamish River.” In mid-March, a King County judge ruled that this case can move forward.

Two camps have weighed in at public hearings. Lease proponents include dockworkers and others with connections to the port and Foss, in particular. They argue for jobs created by the lease (estimated at between 500 and 700) and against the chilling effect that ending the lease might have on attracting future business to the port.

“My biggest concern is… if political winds take your eye off the ball and your core business, that it will be difficult to get other maritime businesses to look at this port as competitive,” Jordan Royer of the Pacific Merchant Shipping Association told port commissioners during a three-hour public comment session in March.

Opponents of the lease, including professional activists and regular citizens, many of them wearing red “The People versus Shell” T-shirts, say providing a home base for an Arctic drilling fleet is antithetical to the port’s sustainability mission and the city’s green goals.

“If you’re willing to tell the port workers of Seattle that the only jobs you can find them at the moment are jobs that destroy their kids’ futures, what jobs wouldn’t you be willing to offer them?” asked Emily Johnston, a Seattle-based writer and activist, who spoke after Royer.

At this point, the debate jumps from local waters and local politics to global impact—a giant leap that can seem either ridiculous and hubristic or urgent and imperative.

The Seattle Times sees it in the former terms. On March 23, the paper’s editorial board argued that climate change and Arctic drilling are best addressed at the federal level. And that if denied a berth here, Shell will find another port in British Columbia or Alaska to protect the $5 billion it has already invested in its efforts.

A few days later, a Seattle Times story signaled what the federal position looks like: Hal Bernton reported that Secretary of the Interior Sally Jewell “looks forward to a new round of oil exploration off Alaska’s Arctic.”

The Seattle City Council doesn’t. “There is a right side and a wrong side on this issue,” says Council member Mike O’Brien, who—along with the entire Council and Mayor Ed Murray—has expressed concerns about the lease review process. One of the places the city can potentially intervene is in its role of enforcing the state Shoreline Management Act.
“We don’t want to tie Seattle’s future to the success of drilling in the Arctic,” says O’Brien, who has been out in front challenging the lease. He’s not convinced there’s a desirable alternative Northwest port for Shell, which is why he says, “This may be the place we put Arctic drilling to rest—at least in the short term.”

The idea that Seattle could strike a significant blow against an enormous, well-funded and motivated fossil fuel giant is not as big a surprise to some. Anna Fahey, senior communications strategist at Sightline Institute, a Seattle-based environmental think tank, explains that these confrontations are becoming more common here.
Over the past few years, the western regions of British Columbia, Washington and Oregon, bound by a strong commitment to sustainability, have found themselves more and more frequently as the proposed and actual launching point for fossil fuel exports from the North American interior to Asia: Tar Sands oil out of Alberta, Canada, carried by pipelines to Canadian ports; Bakken shale oil out of North Dakota and coal from Montana and Wyoming’s Powder River Basin carried across the state to ports north and south of Seattle.

Every step of the way, there have been protests in response to the immediate health and environmental consequences, such as coal dust blowing off uncovered train cars, and the potential for derailments, explosions and oil spills along the routes. Protesters are also motivated by a broader objection: enabling fossil fuel exports that contribute to climate change. That line of resistance in the Pacific Northwest is what Fahey calls “the thin green line.”

“Companies have to ask our permission, and our communities are saying no…you just can’t do what you want anymore,” Fahey says. The Royal Dutch Shell lease adds another potential battleground—one that is only Seattle’s to fight and conceivably has far broader implications.

Climate change as a motivator for action, though, is a tough nut. While polls show that the majority of the public embraces the science that carbon released into the atmosphere as a result of human action is a major contributor to global warming and its devastating consequences, there is a lack of urgency on this issue. Climate often ranks fairly low on the list of the public’s priorities.

But urgency comes at a price, too. Once people come to fully appreciate how big, devastating and exponential the carbon problem is, “they tend to shut down and turn away,” Fahey says. “Our brains are constantly doing mental gymnastics to make it go away.” For climate change policymakers and activists, the ideal is to find that sweet spot between vague interest and shutdown.

One benefit of a victory in the fight to keep Shell out of Seattle could be as much psychic as actual. There needs to be joy, Fahey says. A sense of community and empowerment “can counter some of that overwhelm.”
Even as activists attempt to battle extraction on the ground or on the water (there’s talk of a kayak blockade of the rigs), the Washington Legislature debates Governor Inslee’s proposed Carbon Pollution Accountability Act. The cap-and-trade bill puts a price on greenhouse gas emissions from industrial plants, trucks, cars and electrical utilities in the state. The Republicans argue the bill is a “draconian policy” that seems unlikely to pass in this session.

“But this thing is going to happen sooner or later,” says state Representative Joe Fitzgibbon (D-Burien), who sponsored Inslee’s bill. “The public wants action on this.” That action, Fitzgibbon says, could be a cap-and-trade ballot initiative in 2016.

Neither California nor British Columbia nor the few states in the Northeast with cap-and-trade laws got there through a ballot initiative. It’s a complicated policy that can be hard to finesse with such a blunt tool. Outspoken cap-and-trade supporters such as Fitzgibbon and state Senator Cyrus Habib (D-Kirkland) hope it doesn’t come to that, but Seattle is on the move, marching toward its own goal of being carbon neutral by 2050 and picking a big, public fight. Could some of that fire and the reality of this year’s drought push citizens to take on a publicly popular but politically controversial issue, as they did with marijuana legalization and marriage equality?

As we go to press, a court is evaluating the terms of the lease, the city is researching how it might intervene to block the lease, and a Green Peace vessel is trailing the Noble Discoverer and the Polar Pioneer as they ply the Pacific bound for a berth—that may or may not be waiting for them—in our harbor.