The Price for Free Wi-Fi Kiosks in Seattle: A Private Company Collecting Your Data

In the wake of Facebook's data collection scandal, should Seattle reconsider a proposal for free Wi-Fi at downtown bus stops? 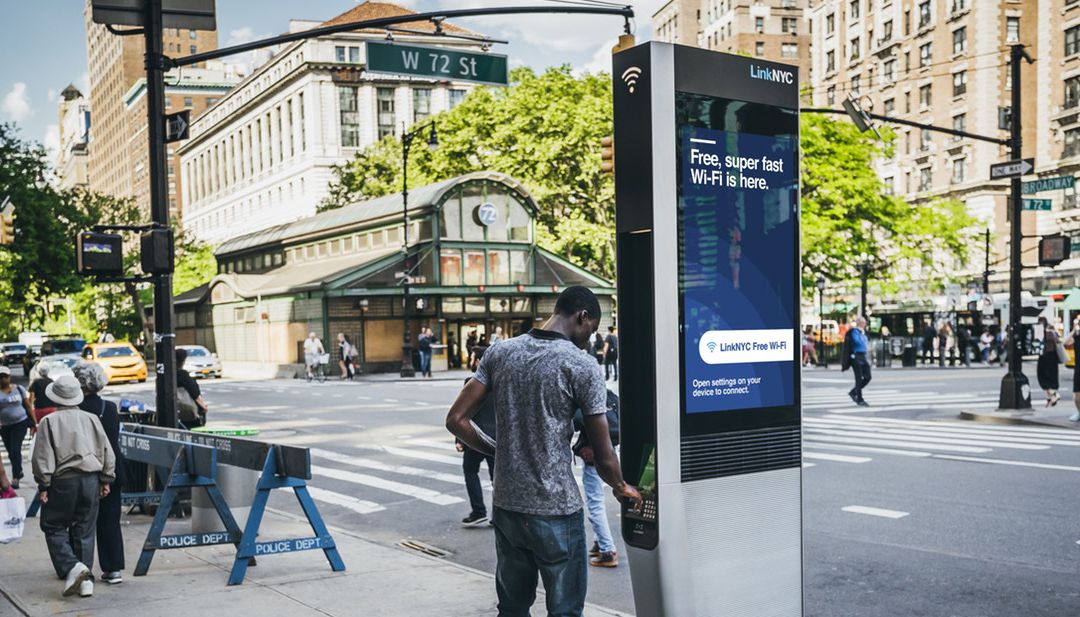 A Google-affiliated company called Intersection is in talks with the city of Seattle to provide free Wi-Fi service, phone charging ports, and real-time information about city services at bus stops throughout downtown Seattle — but there’s a catch.

According to New York-based Intersection, which has an office in Seattle, the kiosks provide steady revenue to cities through ad-sharing agreements while remaining “completely free for cities, taxpayers, and users.” The concept has its fans (New York and London have signed up), but also its critics, who have raised concerns about privacy, data sharing, and visual clutter on city streets.

The deal, proponents say, would provide the city with badly needed funding for transportation projects, promote digital equity for Seattle residents without access to the Internet at home or through their cell-phone provider, and enhance Seattle’s reputation as a “Smart City” that uses data to provide services more efficiently. But at a time when companies like Facebook are facing questions over their use of members’ private information, privacy advocates are cautioning cities to pump the brakes on partnerships with big-data companies that promise something for nothing.

Representatives for Intersection did not return multiple calls and emails for comment (see below for update), but according to the company’s website, the kiosks offer advertisers a “real-time, localized platform—fed by data-driven APIs—to connect with their audiences with more relevance, in the context of their journeys throughout the city.”

City council member Mike O’Brien says that when former mayor Ed Murray broached the kiosk proposal last year, the pitch was that the ad revenues could help pay for the downtown streetcar. Although the streetcar project has been put on hold because of cost overruns, the city is facing another imminent transportation funding challenge: Federal funding for the 2015 Move Seattle levy, which funds transportation projects across the city is falling short of expectations, which could lead the city to look for new revenues to offset some of the shortfall.

Mayor Jenny Durkan’s office declined to comment on the record about the Link Seattle plan, but is reportedly reviewing the latest version of Intersection’s privacy policy and could announce something publicly in the next few months. Mafara Hobson, communications director for the Seattle Department of Transportation, says SDOT “is conducting an initial research and feasibility study” on the plan, but adds that “the work remains a preliminary concept that would require executive approval and significant legislative review and requirements.” (SDOT is the lead agency on the proposal because the kiosks would be located in city rights-of-way).

O’Brien says he’s “skeptical” of Intersection’s proposal, both because it would require changing the city’s sign code to allows ads on city sidewalks—itself a major political lift—and because of a “growing concern about how companies are capturing our data and using it” without our knowledge. “When you’re realizing the stupid test you took on Facebook now is in the hands of some international conglomerate that’s trying to influence elections,” O’Brien says, it makes sense for cities to “be very careful” about authorizing companies to collect their residents’ private information.

Specifically, privacy advocates in other cities have raised alarms about how Intersection uses the data it collects. Although Intersection has said that it collects only “anonymous, aggregated” information about its users, digital privacy advocates say that “anonymous” information can be analyzed not only to extrapolate what type of ads a kiosk should display based on a user’s search history, but to identify and track specific people based on their “digital fingerprints”—a troubling capability in the hands of overzealous law enforcement, or immigration officials seeking to track down undocumented immigrants, or an employer who wants to know how many hours a perspective hire puts in at her current job.

“We hold government to a higher standard than businesses—they’re not supposed to be profiting at the expense of the people,” says David Robinson, a member of the Seattle Privacy Coalition who is skeptical of Intersection’s privacy claims. “If the data is being stored somewhere, then eventually someone will abuse it, no matter what the policy is. If you really don’t want people’s data to be misused, then you shouldn’t be collecting it.”

Shankar Narayan, policy director for the ACLU of Washington, says “it sounds very much as though the price of free Wi-Fi is going to be Seattleites becoming the product—their movements, possibly the information on their cell phones, being downloaded and monetized by a company.”

Although proponents at the city argue that free Wi-Fi levels the playing field between people who have smartphones with unlimited data plans and those who don’t, Narayan says that’s a Faustian bargain. “Basically, we’re saying people who have the means to have an unlimited mobile plan don’t have to sacrifice their privacy to get Wi-Fi.”

Additionally, data collection opens up the possibility of data breaches, like the one at Facebook that allowed Cambridge Analytica to gather personal information on tens of millions of Facebook users.

Devin Glaser, the policy and political director of Upgrade Seattle, a group that advocates for municipally funded broadband service, says free Wi-Fi at bus stops does almost nothing to address the lack of digital equity in Seattle. “If you picture a 12-year-old child needing an internet connection to finish their homework, the fact that they can have access while at the bus stop doesn’t really cut it,” Glaser says. “We need to ensure that all of Seattle’s residents have a robust home connection, not an ad-driven boost to our Words with Friends games while we’re waiting for the 7.”

In New York City, where a consortium of companies, including Intersection, signed a 12-year contract with the city to install more than 1,000 kiosks under the brand name LinkNYC in 2016, the program has been a source of ongoing controversy. Touch-screen tablets had to be removed from the kiosks because passersby were using them to watch pornography, and privacy advocates raised questions about the company’s retention of personal data, including browser history. Although citizen activists forced the city to revise Intersection’s privacy policy to limit how long the company would store people’s private information, they have been unable to force the company to turn off the cameras that are located in every kiosk, recording silent video 24 hours a day. Intersection says it deletes that video every seven days unless it’s needed “to investigate an incident.”

Privacy advocates say Seattle has done a better job than most major cities, including New York, of protecting its residents from public and private surveillance. Last year, the city council passed an ordinance that gives the council some oversight over city departments’ use of surveillance technologies—things like the controversial “wireless mesh” system that gave Seattle police the ability to track people using wireless devices throughout the city, or the Acyclica system, which tracks travelers’ progress through downtown using a series of devices that detect and identify people with Wi-Fi-enabled devices. (A full list of the 28 city-operated surveillance technologies identified last year is available on the city’s website.)

Seattle could consider beefing up its privacy ordinance to make it harder for companies to track and misuse user data. But that would require leaders to educate themselves on emerging privacy concerns proactively, the ACLU’s Narayan says. “Cities are not often sophisticated actors in this space—they don’t know when they’re getting a bad deal.” Narayan says that before cities sign deals with companies like Intersection, they should take the time to understand how the technology operates and put the appropriate safeguards in place.

“When automobiles first came in, there were no speed limits and no red lights, and people were getting run over and killed all the time,” Narayan says. “The automobile didn’t die because we invented red lights and air bags and better brakes and put bumpers on cars. The technology better and everyone got a better deal out of it.”

UPDATE (4/20): When reached after the initial publication of this story, Intersection spokesman Dan Levitan said the company does not collect browsing data or track users across the city. He did not deny that the technological capability for such data collection does exist, but stressed that the privacy policy for LinkNYC requires that this activity does not take place in any capacity. Intersection says that its privacy policy agreement in New York City protects users from data collection activity. Those agreements, however, are made on a city-to-city basis, and the issues now being raised by privacy advocates in Seattle draw comparisons to those raised by the New York Civil Liberties Union last year.

Levitan provided Seattle magazine with the following statement: “Intersection takes user privacy seriously and works closely with our city partners to craft strong privacy policies for all our Link deployments. We do not track or record the browsing activity of our users. Advertising on Link displays is never targeted at any individual, and there is no advertising inserted on mobile devices that connect to Link Wi-Fi. Cameras are only used for monitoring and maintenance of the structures and cannot be used for advertising or any other purpose. Footage is only accessible by law enforcement with a court order or lawful request. We are proud of the LinkNYC program, our partnership with the City of New York, and the of the service we provide to over 3.7 million users.”