The community roared its objections against a public-private partnership to renovate the community center. Is such an arrangement ever appropriate? 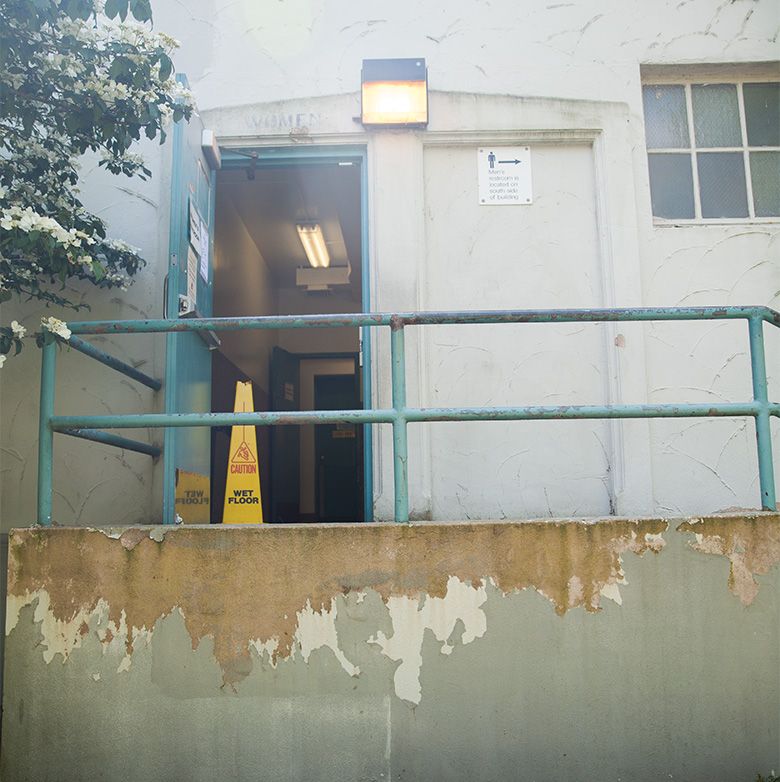 To the casual visitor, the problems plaguing Green Lake Community Center don’t immediately present themselves. Sure, there are a few big plastic buckets scattered to catch the drips that leak from the roof on rainy days, and some of the sagging ceiling tiles are held in place by painter’s tape. But what old building doesn’t have its share of minor issues?

Look closer, however, and the cracks start to show. Some are literal—in the deck and shell of the circa 1955 Evans Pool—and others are metaphorical, like the tiny preschool room that’s bursting at the seams with toys, kids’ bean sprout experiments and child-size chairs. The floor of the gym (which has no wheelchair access) is buckled and sagging because of water damage from the leaking roof, and the upstairs kitchen has been closed for months because there’s no money to pay for the repairs required to bring it up to code.

This litany of issues has led the city to conclude that Green Lake—along with Lake City Community Center, also in North Seattle—should be replaced rather than repaired at an estimated cost of $25 million for Green Lake alone—and Seattle Parks and Recreation says it doesn’t have that kind of money. In fact, the parks department says that replacing Lake City and Green Lake community centers, and repairing six others requiring immediate maintenance, would cost about $62 million, or about 18 times the department’s current budget for such fixes.

To fill the gap, Jesús Aguirre, superintendent of Seattle Parks and Recreation, says the department is considering a public-private partnership with a nonprofit, such as the Associated Recreation Council of Seattle (ARC) or the YMCA, to build and run a new community center at Green Lake. But that idea has run into a wall of opposition from a new group of Green Lake community activists, who say the city should either use current funds to fix the community center or figure out another way to replace it.

Oh, and they have another word for public-private partnerships: privatization.

“Providing recreational facilities is a core mission of the city,” argues Susan Helf, head of the newly formed Save Evans Pool and Green Lake Community Center group. “It’s inappropriate for the city to transfer that over to a private organization that would result in no transparency, union busting, lower pay and higher fees.” (Parks superintendent Aguirre says the city has had no formal conversations with the YMCA, and denies that his department would ever partner with any organization that charges Seattle residents more for less.)

“This is the trend now in recreation and parks, [but] it has no place in an extremely rich city like Seattle, where money is pouring in,” Helf says.

Whether public-private partnerships are ever appropriate and exactly what existing city funds should pay for are at the heart of the Green Lake discussion. Are our community centers really for everyone if they’re run by private nonprofit groups? What responsibility does the city have to come up with the money to keep its recreational facilities from falling apart? And given that voters approved a new property tax in 2014 to pay for parks maintenance, why isn’t there enough money to pay for everything?

To the first, parks superintendent Aguirre points out that the city is no stranger to such arrangements. “We’ve got dozens and dozens of them at this point,” he says. This kind of arrangement is frequently used to maintain and expand popular but expensive programs. Think of the zoo, for example, or the downtown aquarium, both of which are operated by private nonprofit groups. Or, for that matter, the recreational and preschool programs at community centers such as Green Lake’s, which are run by the ARC, a private nonprofit organization.

Aguirre bristles at the notion that partnering with an outside group such the ARC or YMCA constitutes “privatization.” He prefers the term “public benefit partnership.”

“Privatization would be ‘Let’s give them the keys and they can build a restaurant, they can do whatever they want, as long as they give us some money,’” Aguirre says. “We’re talking about some kind of operating agreement where we’d identify an organization that shares our values and continues to provide the same services that we’re providing, but does it better.”

Trying to subsist on current resources will result in the city’s parks and community centers falling into disrepair, Aguirre says.

Not everyone agrees with that assessment, including Helf, who believes the parks department can come up with more funds. One avenue is the 2014 metropolitan park district levy, which gave the city the authority to levy as much as 75 cents per $1,000 on homeowners’ assessed property values. Currently, the city levies just 33 cents of the 75-cent-per-$1,000 maximum. Helf says if the park district is serious about fixing crumbling community centers like Green Lake’s, it could increase the tax, or find the money elsewhere. “I’d certainly pay another $30 a year to get a pool and community center that works,” Helf says.

But other parks advocates say it isn’t that simple. Michael Maddux, one member of the committee that came up with the metropolitan park district proposal, says the plan voters approved in 2014 was designed to backfill about $267 million in deferred maintenance to the city’s parks system, not to fund large capital projects like new community centers. Although the Park District Governing Board (composed of all nine members of the City Council) could direct dollars in a different direction after the current six-year levy cycle runs out, replacing pools and community centers would require additional funding, and “it was made very clear during the campaign that going up to the [levy] cap was not an option, because that would be such a dramatic increase,” Maddux says. Meanwhile, city officials say other potential revenue sources, such as real estate excise taxes, are already earmarked for other purposes.

Aguirre says there is another important issue as well. As the city grows and its population centers shift, it won’t be enough just to maintain our current parks and community centers. The city will have to decide how, and where, to expand the parks system to meet future demand, and how to fund that expansion. That may mean adding new community centers in parts of the city where there are gaps, like Wallingford and South Lake Union, or upgrading services in areas like Rainier Beach, which just received a new community center in 2013.

“We’re going to have to ask, what do the community center needs of the future look like?” Aguirre says. “And it may mean—and these are harder conversations to have—that Green Lake may not be the biggest challenge…. It’s one of 27 community centers, and it’s one of hundreds of amenities that the parks and recreation agency provides for its residents.”

Helf says Green Lake is different, because—unlike other neighborhood parks and community centers—it draws people from all over the city. “There’s some very disturbing language” in the 2016 Community Center Strategic Plan, Helf says, “which says that Green Lake is too white, it’s too wealthy, and it has too many homeowners” to merit immediate investment. “These conclusions that Parks reached are really inaccurate.”

City Council member Mike O’Brien, whose council district includes the Green Lake neighborhood, met with members of Helf’s group during his office hours at the Ballard branch library in April, where they showed up demanding that he pledge to oppose privatizing the community center. Although O’Brien didn’t go that far, he did say that he wouldn’t support any partnership that the community doesn’t want. “If the community is flatly opposed to it, I’m fine with that—we won’t do it,” O’Brien says. But, he cautions, “that money is not just going to magically appear to pay for this, so I would argue that we should stay flexible.”

District 5 City Council member Debora Juarez, who heads up the council’s parks committee, says Helf and her group’s protests are “not falling on deaf ears. Nothing is going to get built or done without community input, and if [a proposed partnership] doesn’t fit with that community and their needs, no one will impose something on them that they don’t want.” In fact, while there are plans underway to develop a process to come up with a long-term vision for the city’s parks system—and a discussion of public-private partnership is expected to be part of that—at press time, there was no timeline.

“If I were still in the private sector, I could think of 10 ways to fund this,” Juarez, a former private attorney, says.

That kind of creativity Juarez alludes to—whether it means privatization or some other funding mechanism—may be needed if what Aguirre asserts is true. “The reality is that we are never going to have the level of resources to meet the demands that are going to be placed on us. There’s always going to be a gap. My challenge is, how do I try to bridge that gap in creative and innovative ways?”