Like so many people in Seattle and beyond, we were greatly saddened by the news earlier this week of Paul Allen’s death 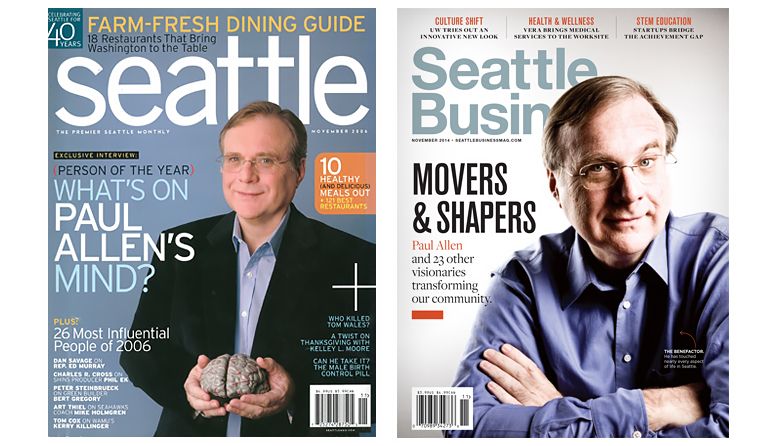 He’s frequently appeared on the pages of Seattle magazine and our sister publication, Seattle Business. His most recent Seattle magazine appearance was in November 2017, when we called him out as one of 2017s Most Influential People of the Year (not the first time he’s appeared on this list) for the Upstream Music Fest and Summit.

As we talked about a Seattle without Paul Allen, a few of our staff and contributors remembered their Allen encounters over the years:

“Most kids don’t go to high school with future billionaires, but I went to Lakeside and there was more than one.

It was a smallish prep school, all boys when I started there, and many students in the Upper School were known to each other. Bill Gates looked like he was 12. He was obnoxious and clearly the smartest kid in a school with lots of smart kids. I don’t think I ever talked to him then.

Paul Allen was different. More of a cool guy who seemed socially adjusted, at least more so than Gates. There was a lounge—really just an empty office with no furniture—for Upper School students. It was a resting spot, a study spot, a place to BS with classmates. I never saw Bill in there, but Paul Allen, yes. I remember him sitting against the wall with a briefcase, long hair, sideburns and a Fu Manchu type mustache. Hey, it was 1970.

You could talk to Paul, though I remember no specific conversation, but I do remember BSing with him. We probably talked about books—was it Dostoyevsky? Brautigan? Roth?

He was quiet, smart, friendly. No so much the Howard Hughes he turned out to be later. In the years after Microsoft, he could be reclusive. As an editor of Eastsideweek in the 1990s trying to cover Allen was difficult. His people called and complained—at volume!—if reporters came too close to home or family. He told old classmates not to talk about him, and if they made that mistake, I understood that they heard about it.

Which is why I really appreciated his 2011 memoir, Idea Man, because he finally told his story of growing up, going to school, his ups and downs with Gates, revolutionizing the world with the personal computer. Also you got a glimpse of his passions. I think it is hard for outsiders to see beyond the billions, but he did give us glimpses.”

“In 2006, during the Seattle Seahawks’ first Super Bowl experience, I was a sports columnist for the Seattle Post-Intelligencer. A week or so before the big game, local media outlets were informed that Seahawks owner Paul Allen would be made available on a certain date and at a certain time to answer our Super Bowl-related questions. It was a little like being informed the pope would be dropping by for coffee, because Allen interacted with reporters about as often as Halley’s comet visited.

Alas, a death in my family caused me to miss the media scrum. I was sad that my stepfather had chosen a bad time to die — at least in terms of my work schedule — but I figured I’d get my chance to interview Paul Allen some other time.

I was surprised when “some other time” occurred just a few days later. I was in Detroit for the run-up to the Super Bowl and got a call from the Seahawks informing me that Mr. Allen would be available to chat on the phone with me, if I was interested.

I was interested. We had a good talk, one on one, for maybe 20 minutes. I got a good column out of it. And, to this day, I remain flabbergasted by his generosity.”

“I met Paul Allen in his Bellevue office in 1995 to report on my story A Visionary In Search of a Vision. Allen had just invested $500 million in DreamWorks, a movie studio established by Steven Spielberg and two friends, and the Los Angeles Times wanted to learn more about this reclusive billionaire and his interest in Hollywood.

I remember we were both pretty uncomfortable at first. Allen seemed distracted, and frequently stared out the window as he answered my questions. But I remember catching a glimmer of a smile as we started talking about the future of interactive cinema. “What if the hero made decision B rather than decision A?” he asked, leaning forward a little as he imagined interactive movies that would allow viewers to make decisions about the path of the movie. “Maybe it’s a dynamic virtual experience where you are in there with a bunch of other people who are representing other roles in the story and you are making rules in real time.”

Interactive movies haven’t caught on. But I’ve watched with interest as his predictions have come about in the explosive growth of video games. And I suspect Allen’s prediction that sports viewers of the future would be able to switch camera angles to follow particular plays will one day be realized.

What strikes me today is that Allen’s biggest successes were triggered by his desire to do good. His redevelopment of South Lake Union, arguably his most successful effort, began with a $20 million loan to support the Seattle Commons, an idea of creating a Central Park for Seattle. If that park effort hadn’t failed, and if Allen hadn’t created all that new office space near downtown, it’s unlikely Amazon, Google and Facebook would have established their large operations in Seattle. Seattle might not have become the tech center it is today.”

On September 16, 2006, I was scheduled to interview Paul Allen in connection with his still-new Allen Institute for Brain Science for Seattle magazine’s Most Influential People of the Year feature.

I did not have high hopes for the interview.

First, it was a phone interview, the ugly step-child of interview formats. Second, there was a severe time limit—it was something odd like seven minutes—and listening in would be a PR rep (heavy sigh). Third, it was an interview with Paul Allen. That meant a native Seattleite—aka, an often aloof, tight-lipped species—and a tech genius, a class not exactly known for their chatterbox or quotable tendencies.

So the odds of an interesting, freewheeling chat? Infinitesimal.

However it was Paul Allen. Basically, Seattle’s answer to Steve Jobs when it came to making cool things (say, a Jimi Hendrix-inspired rock ’n’ roll museum). And he wanted to talk all about brains—so, no brainer, I accepted Seattle magazine’s interview opp—limits and all.

On the appointed day though, I did find myself wishing I had passed on this once-in-a-lifetime experience/probable train-wreck. I imagined only hideous dead air, and, worst of all, coming away with no printable A’s to my Q’s.

Instead, I got that freewheeling chat.

The bulk of our discussion was fascinatingly brain-mapping focused, but we also talked space ships, philanthropy, arts, real estate and medical research (all wholeheartedly bankrolled by Allen), and his and tech’s early days. And the all’s-going-well indicator for me, laughs were had. Of course, we also covered sports. After all, that past season, he and his Seahawks—and this city—had just experienced their first (and losing) Super Bowl appearance. Some would say—and many did—that it was a game rife with mis-calls, but, even when I egged him on, Allen would not. Simply, offering up a classically optimistic sports prediction, “This year.”

I’m not sure of the interview’s final minute count. However, I know it very generously went past what had been agreed, and that I am lucky to have shared time (even over the phone) with one of the coolest minds of our age.

This writer will remember Paul Allen well, and his hometown miss his influence greatly.