A Salvadorian Street Dog Inspired This Microsoft Dropout to Give Back

With Pasado’s Safe Haven, Laura Henderson applies her business acumen in the service of animals. 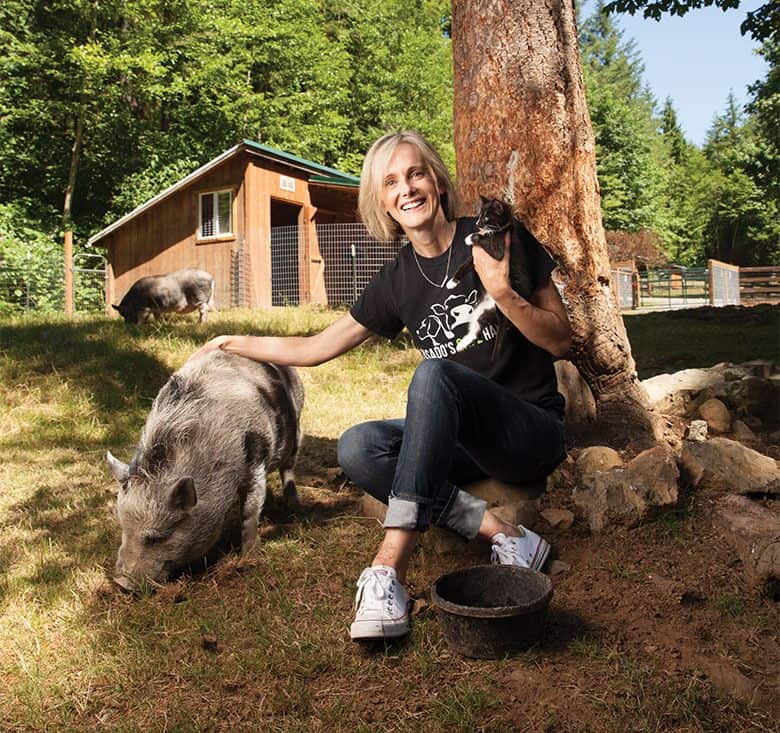 In the business world, Laura Henderson was a boss. For many years, the Roosevelt High and University of Washington grad held senior and consulting roles at Fortune 100 companies like Boeing and Microsoft. But her skyrocketing corporate career jagged sharply in 2010 when she took three months off and traveled to El Salvador to contemplate her next move. “I hit a point at Boeing wondering if I was having the impact with my life that I really wanted to have,” she says.

It was an encounter with an El Salvador street dog that altered her career path. “I allowed myself to connect with her,” she says, gesturing to the midsize, mixed-breed pooch lolling on the lawn of a small dog park at Pasado’s Safe Haven, an 85-acre animal sanctuary nestled in a lush pocket of Monroe where she serves as executive director. “She reconnected me with the power of taking some action, even if you can’t fix everything,” says Henderson, who had previously volunteered with The Humane Society. “I was reminded of my deep love of animals.”

Henderson returned to Seattle and went back to Microsoft, all the while seeking a way to “plug in to work with animals.” When a friend offered to bring her along on a volunteer shift at Pasado’s, she jumped at the chance. “We were mucking barns, and I had this huge grin on my face. I was thrilled to be there.”

At the end of the session, Henderson learned the nonprofit sanctuary had just resumed a search for an executive director. “You have those moments of just knowing in your life,” she says about realizing her calling. “I don’t think I’ve ever felt that feeling so clearly in my life.”

Henderson rang in four years with Pasado’s this past July. “Knowing you’re coming to work every day to do something that matters and is helping, it’s huge. It’s a lot deeper than I thought it would be.”

Early Interest
Henderson was in fourth grade when she asked permission from her teacher to do a presentation on endangered species for her classmates. “I really wanted them to know. I don’t know what impact it had, but it felt like the right thing to do.”

Puppy Love
Zandia, the name of Henderson’s dog, is an adaptation of the Spanish word for watermelon, the first food Henderson remembers her eating.

A Legacy of Love
Pasado’s Safe Haven is named for a donkey who lived at Bellevue’s Kelsey Creek Farm park and was tortured and killed by three teenage boys. The story is tragic, but his legacy provided a groundswell of public support that helped establish the nonprofit sanctuary, which will honor him 25 years after his death with Pasado’s Safe Haven Lovebash 2017 on September 16 at Metropolist (ticket prices vary).