As the Seattle Boom Continues to Spread, This Quaint Maritime Town Could be Destined for Change

The next decade could be the high-water mark for Bremerton. What gets swept away? 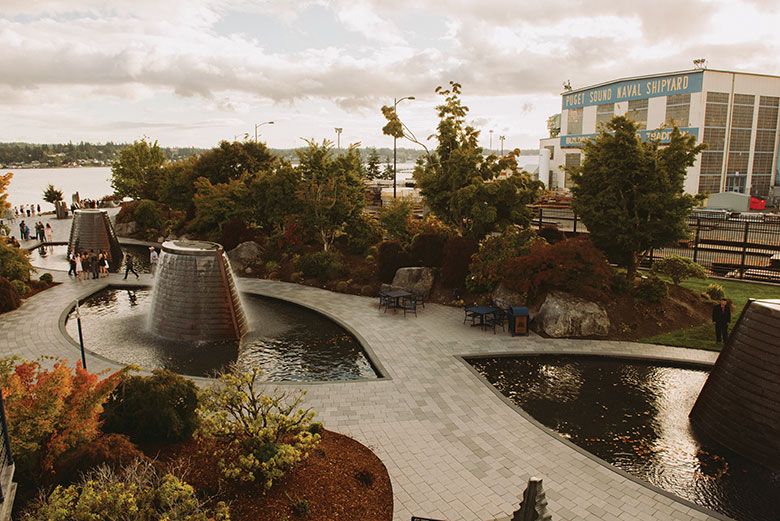 Bremerton is a maritime town, 14 miles as the crow flies from Seattle or a 30-minute ride on the new fast ferry. Bremerton’s boosters think that this passenger-only ferry—which began service last summer—will provide the final surge in a wave of civic investments and private construction that will carry the once-struggling city to new heights.

But with it arises the same conundrum that is being faced across the region. If growth and prosperity come to the city, will the working-class wage earners from the Puget Sound Naval Shipyard (one of the town’s biggest employers) and the service industry be priced out?

I began an afternoon walk through the seven blocks that make up the downtown core of the city at the 2.2-acre Harborside Fountain Park. It’s just west of the ferry terminal and runs the length of the shipyard. Water again flows from the coning tower fountains, following a $75,000 investment to make the park safer and friendlier for wading. When it was first opened in 2007, the $20 million park was built to provide an additional defensive perimeter for the naval shipyard, more security fence than water attraction. But you can’t keep little children away from spouting water, so take that, al-Qaida. Freedom wins again.

Walk through the park, dip your toes in the water, think about the design of those fountains: submarine towers emerging from the depths. It’s a nice stroll, past the Puget Sound Navy Museum and through Memorial Plaza (both nods to the naval shipyard), dotted with Navy gray panels honoring working men and women; a reminder of how much of the wealth of the Puget Sound region is built on federal defense spending.

Once traffic from the afternoon ferry commuters and shipyard workers clears out, Pacific Avenue gets pretty quiet for the main street of a city of 40,000. Pacific used to be the street for cruising muscle cars and hot rods. Now, you can pretty much jaywalk with impunity. Here the problems and the promise of the city are on display. The anchor businesses left downtown for nearby Silverdale’s Kitsap Mall when it opened in 1985. The core was left with many empty two- and three-story buildings. A “sail” from the decommissioned USS Parche submarine stands in front of the Puget Sound Navy Museum.

On the block of Pacific between Burwell and Fifth, there are a decent handful of open businesses, including Chrey’s Fine Jewelry, Toro Lounge, El Balcon Salvadoran restaurant and Liberty Bay Books. But there are even more empty storefronts; as Marie Weichman of the Bremerton Arts Commission puts it, “Everyone knows an empty window is not attractive, nor does it create a feeling of safety for the community.”

Weichman is a professor of art at Olympic College, a community college with a campus in Bremerton. She and artist Carla Grahn started Art Windows Bremerton last January to offer property owners something to display other than darkened storefronts. Sometimes, it’s their own existing work; sometimes an artist or group creates a new piece specifically for a window.

There’s a life-size cutout of Mad Magazine’s iconic Alfred E. Neuman in the empty storefront window of the old JCPenney store at Burwell and Pacific. The “What, me worry?” guy sits on a wood pallet, strumming a guitar, surrounded by the flotsam and jetsam of a world submerged by rising sea levels.

“Instead of rushing past our available commercial properties, community members tend to slow down and look at the windows,” Weichman says. “They tell a story to visitors about our town and the people that live here.”

At the other end of the block and across the street, at Fourth and Pacific, is a 14-foot metal statue of a fisherman being hooked and reeled in by a giant salmon that’s across the intersection.

Fourth Avenue between Pacific and Washington used to hum with activity. The Art Deco Roxy Theater opened in 1941, sharing the block with Sears, Montgomery Ward and several smaller businesses. But most of the block has been vacant for years. That’s changing.

Chain-link fences surround the former Sears store and Ford dealership. They are being converted into 27 urban lofts, 159 storage spaces, retail and parking. The Roxy is being restored, with a projected December opening. The whole area will be renamed Quincy Square, in honor of musician Quincy Jones, who spent some of his teenage years in Bremerton. In his autobiography, Jones recounts breaking into an armory recreation center with some friends, discovering a piano and finding his calling. Sound West, the developer, says the block will feature oversize piano keys on the sidewalks and street, as well as cafés, street markets and performance spaces.

Up Pacific, past Fifth, Brian Johnson, the executive director of the newly remodeled Admiral Theatre—once a movie house and now a venue for live events—says that with more to do and see downtown, more people will be moving in. “There were a lot of empty buildings for a long time,” he says. “I think a lot of those buildings are starting to fill up. Lot of decent spots.”

Outside the theater, beneath the newly repainted Admiral marquee, Ken Perry, a 10-year season ticket holder, is pressure-washing the sidewalk.

He’s wearing shorts, but his legs are coated with enough grime that, at first glance, he appears to be wearing long, very dirty pants—they’re a bit of a performance art project themselves. “My family has been here since 1938,” Perry tells me, “so I grew up kind of downtown, and downtown has really changed.…The city’s brought in a lot of money and took a lot of big gambles, and it’s just starting to pay off.” The Admiral Theatre, originally opened in 1942, no longer shows movies but was remodeled in the 1990s as a venue for live events.

The city of bremerton’s 2016 Comprehensive Plan—a framework for the city’s future growth—projects a population of 53,000 in 20 years, up from 40,000 today, and 18,000 more jobs in the manufacturing, maritime and service sectors.

Between 2002 and 2007, downtown Bremerton’s waterfront was part of an ambitious $400 million revitalization effort, which included construction of a waterfront park and public plaza, a conference center and a naval museum. Condos, hotels and restaurants were also built, and the marina was upgraded.

Today, more than a dozen multimillion-dollar residential projects are rising or are planned along the waterfront and around downtown, including the tallest building in Kitsap County, the proposed 17-story Eagles high-rise, at Sixth and Washington, containing 224 apartments, three levels of parking, a rooftop rec center and a ground-floor plaza.

Zillow lists the median home value in the Bremerton metro area at $326,700, more than an 8 percent increase since 2016.