Seattle Center’s Space Age Ground Zero is Worth Remembering, if Not Saving

The city is considering granting the piece of Seattle history landmark status. 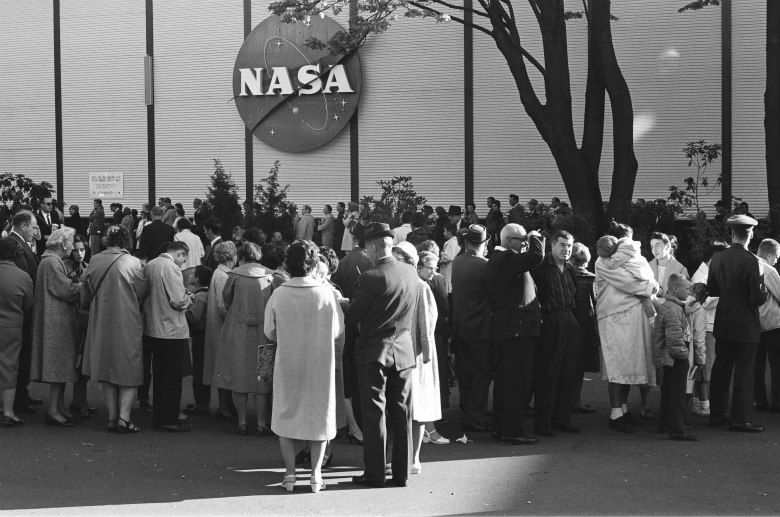 Last week, to no one’s surprise, the Seattle Landmarks Board voted unanimously to formally consider KeyArena for landmark status. The historic structure, central to the city’s plans to bring NBA basketball and NHL hockey to Seattle Center, met each of the six criteria for preservation, and is only the third building in the city (after the Space Needle and Pacific Science Center) to do so.

Unexpectedly the board decided to consider two other structures on the KeyArena property for landmark status as well. Neither had been recommended by the landmarks office staff for protection, and their demolition as part of redevelopment of the arena site has been pretty much a given.

That’s certainly true in one case where the nominated structure is a deeply compromised concrete box used by Seattle Center as a storage facility, and is only a remnant of the original building. This structure, the landmark staff found, was historically significant, but “alterations prevent it from conveying its significance.” Architectural integrity is generally a very important factor in landmark consideration.

Still, consider the history that occupied that concrete box, now called the NASA Building, 55 years ago. It’s what’s left of the NASA Pavilion, the actual place where Seattle’s “Space Age World’s Fair” met the actual Space Age in 1962. Other old fair structures symbolized the future of “man in the Space Age,” but this building actually contained the state-of-the-art gear to get us to the New Frontier.

The NASA Pavilion, just south of what we now call KeyArena, was the first major outreach of the space program to engage the public with exhibits of real rockets, satellites and other tech that was pushing human limits. One of the new, young heroes of the age, Lt. Col. John Glenn, the first American to orbit the earth, visited there in May of ’62, just months after his successful orbital flight. He and other astronauts and test pilots attended the fair, including a young, pre-moon-landing Neil Armstrong. They came to talk about space exploration, but also to inspire the next generation.

Rocket scientists like Wernher von Braun came to the pavilion, so did then Vice President Lyndon Johnson. So did the Russians with whom we were competing in space, on earth and in the realm of ideas. This was the middle of the tensest parts of the Cold War and the space race was at full speed. The fair itself would never have happened but for the U.S. government being determined to show off science and technology in the wake of the Soviet Union’s successful launch of Sputnik in the late ‘50s. If Seattle was ground zero for the Space Age, the NASA Pavilion was arguably ground zero’s ground zero.

I have a powerful memory of being in the NASA Building as an impressionable 8-year-old. Glenn’s actual space capsule, Friendship 7, came to the fair in August of ’62 as part of an around-the-world tour so that the public could see it up close in the NASA Pavilion. It was a sensation. The Seattle Times reported that the capsule boosted fair turnout and drew “capacity throngs.”

I was among them. I remember standing in line to get a peek at the future—you could touch it, you could see it by peering into the tiny space inside where Glenn had made history. Talk as much as you want about flying cars, but the experience of seeing that capsule in person was what it must have felt like to see a holy relic in the Middle Ages. It had the power to propel mind and spirit. In a city moved by minds like Bill Gates and Paul Allen, who both visited the fair, and successors like Jeff Bezos, the civic resonance of such events is lasting. During the fair, John Glenn toured what was then the Washington State Pavilion, currently KeyArena. Photo courtesy of the George Gulacsik Collection, Seattle Public Library.

The pavilion was part of a complex of structures that bookended the KeyArena building, which then was the Washington State Pavilion, later the Coliseum. The most intact portions are the exhibit spaces we call the Northwest Rooms on the north side, which are collectively landmarked. The south side of the Key has buildings that date from before, during and after the fair, but that parcel of the property has become largely the utility end of the arena with loading docks, tunnels and back-of-house functions. Redevelopment might see new entrances and amenities there. The landmarks process will determine how much of the southern slate can be cleared.

The old NASA Pavilion was previously cut down and stripped of some of its original, corrugated metal exterior pieces. The storage building is the most intact portion left; some concrete panels from the original also adorn a nearby structure called Seattle Center Pavilion that is not landmark eligible.

The NASA Pavilion was designed by Paul Thiry who designed the original Key/Coliseum. He was also the supervising architect for the entire fair site. A couple of the other structures on the property predate the fair but were used as staff offices during the exposition. One of them, the Blue Spruce Building, a repurposed 1950s era apartment building, is also being considered for landmark status. It houses local nonprofits, like Book It Theater and, formerly, Folklife.

The fact that the Landmarks Preservation Board is taking consideration of the NASA Building to the next level doesn’t mean it will be saved. But board members seemed to want more time to consider the structure’s fate and history. They will also tour the structures before the Aug. 2 meeting at which they’ll make their decision.

Though the NASA Building is only a remnant, the board is wise to not let it slip unremarked and unexamined into history’s dustbin without a second look. It is worth remembering the heroism and promise it once represented.