Virtual reality offers a different way to see the world. Seattle companies are jumping on board—and believe it will change the way we live

By Connor Raikes and Drew Atkins 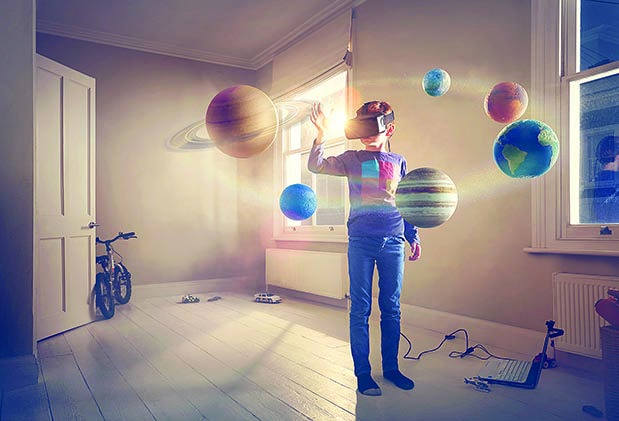 Behind an inconspicuous steel door, hidden amid the restaurants and retail of Seattle’s South Lake Union tech nexus, a small company called 8ninths is trying to harness the next big thing. Wires cover the floor of the studio offices, connected to a half dozen headsets of varying clunkiness.

The headsets—with names such as Oculus Rift, Samsung Gear VR and Microsoft HoloLens—are defined broadly as virtual reality (VR) technology. To believe VR evangelists, this is a new medium like television or computer screens, capable of changing how we live. It will remake education, as students learn history through immersive virtual simulations; allow a surgeon in London to operate on a man in Singapore; and enable engineers to collaborate on projects across continents. It will change how homes are bought as people tour any available property in town from the comfort of their couch, and will influence world politics as VR allows people to more deeply understand issues and conflicts occurring a continent away. And much, much more.

In only a few years, the Puget Sound region has become a hotbed for companies building this new future. An encapsulation of that local excitement can be found at 8ninths, where company founders Adam Sheppard and William Lai sense opportunity.

Until recently, their 8-year-old company was in the online marketing business. But 20 months ago, the entrepreneurial Microsoft alums got their hands on the Oculus Rift, from the virtual reality company that launched the current craze. Now 8ninths is fully invested in VR and its related cousin, augmented reality (AR).

“We recognized that VR and AR is as big a wave as Web and mobile,” Sheppard says with a missionary-like earnestness, insisting it “has applicability to almost every single [area of life] you can imagine.” For example, they believe bankers will eventually use VR to essentially surround themselves with spreadsheets and data, like traders on the floor of a virtual New York Stock Exchange, moving billions of dollars around the globe. Citibank commissioned them to create a prototype of this financial future.

VR’s exact definition is still debated, but it generally refers to the use of screens and sensors to simulate three-dimensional imagery, usually via a headset. The fact that the founders of 8ninths are new to the technology is hardly an impediment. Nearly everyone in the VR industry was working in a different tech-related field a year or two ago. Image by: United Nations SDG Action Campaign
Seeing the VR movie, Clouds Over Sidra, convinced Jennifer Butte-Dahl that the technology can be transformative

One of the exceptions is Bob Berry, CEO of Bellevue-based Envelop VR, which is creating virtual 3-D environments in which co-workers can collaborate visually, even when the workers are on different continents. Every new technology has its early adapters, and Berry is perhaps one of the region’s earliest, having followed VR technology since the ’90s. As recently as four year ago, he notes, almost no one was talking about it. VR was an idea that had been around for decades but never took off, for the simple reason that the existing headgear often gave people motion sickness within minutes.

That changed in 2012, when then 17-year-old Californian Palmer Luckey used smartphone parts to create a series of headsets, each time improving the technology, slowly proving that VR wasn’t a recipe for nausea.

Since that critical refinement, billions of dollars have poured into the industry, igniting a feeding frenzy that’s brought big fish and little fish to Puget Sound waters: Luckey’s California-based Oculus, acquired by Facebook for $2 billion in 2014, has offices in Redmond and Seattle; Redmond-based Microsoft has the HoloLens headset, which utilizes “augmented” or “mixed” reality—essentially digital elements visually overlaid in the real world, similar to how Pokémon Go uses smartphone cameras to superimpose animated monsters over city streets.

And then there are small companies like 8ninths and Envelop VR, chasing the boom to come.

Another local startup on the software side is Pluto VR, which is making a whiteboard app for business, as well as games. While startups in “Silicon Beach,” the name given to a hive of tech activity in Los Angeles, focus on the medium’s cinematic potential, many Seattle-area startups are focused on business uses and gaming.

Each of these companies represents a gamble on VR’s potential, given that there are no best-selling VR headsets on the market yet. At the moment, it’s an industry built on wishful thinking.

But to hear VR proponents talk about this technology, all you need to do is put on a good headset that’s running the right software and you’ll understand what the buzz is about. You’ll walk on the floor of the ocean, soar above a city or dodge bullets in slow motion.

Jennifer Butte-Dahl is an early believer in the transformative possibilities of VR. A faculty member of the University of Washington’s international studies program, in 2015 she spent time working in a Syrian refugee transit camp in Greece. When she returned to the U.S., she was frustrated that most people didn’t seem to understand the seriousness of what was happening, and that the issue seemed to exist only in the abstract for news consumers.

Then a friend showed her a short virtual-reality film titled Clouds Over Sidra, which focuses on a 12-year-old Syrian refugee in Jordan. “She leads you by the hand through her life,” Butte-Dahl says. “You’re in her tent, you’re in her classroom, you’re on the soccer field with her, you feel like you engage with the people around her. And I took that headset off, tears streaming down my face, and said, ‘This is how we get people to care.’…It allows for empathy and compassion in a way I’ve never experienced before. It’s gotten me really thinking about what’s possible in international affairs using virtual reality technology.”

That may be one reason The New York Times has been pouring resources into VR nonfiction storytelling and real-world immersion. Clouds Over Sidra was created in collaboration with the United Nations. This year, the Seattle International Film Festival highlighted films like it in a special subsection of the festival dedicated to VR moviemaking.