Today’s library system is reaching out to touch patrons in new ways, keeping our local libraries more relevant than ever. 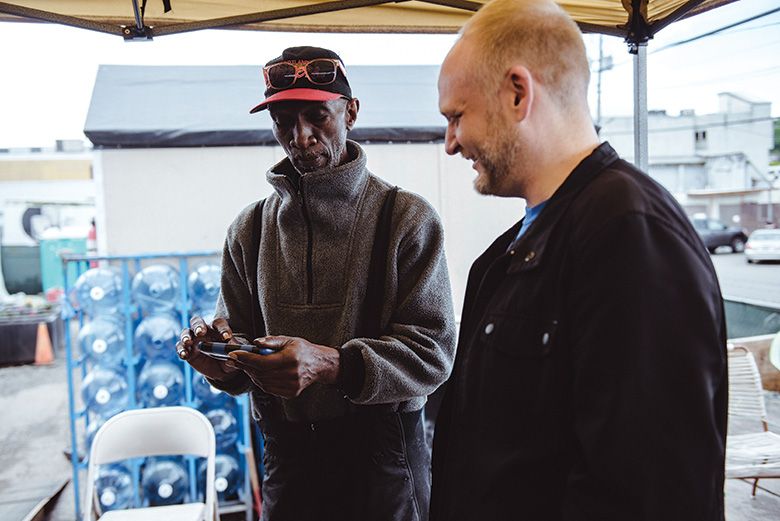 On a drizzly April afternoon at Tent City 5, located behind a QFC in the Interbay neighborhood, camp coordinator Al ushers Seattle librarians Toby Thomas and Jesten Ray past a row of tarp tents to a communal kitchen. Here, at a long table, they set up a makeshift checkout station.

A middle-aged man who goes by the name of Tim is first in the library line, waiting to check out a Wi-Fi hot spot. Originally from upstate New York and homeless for more than seven years, he was living in indoor shelters and on Seattle streets until securing a spot at the tent city a few weeks earlier. Tim goes to the Central Library almost daily, and that’s where he first learned about the hot spots. He checks them out so he can connect his computer to the internet and browse Facebook and scour Craigslist for jobs.

Across the city in the Lake City library branch the following day, Shoreline resident Michiko Baker attends a free workshop to learn how she can sell florentines—a French cookie common in Japan where she grew up—at local farmers’ markets and other locations. The workshop is part of an entrepreneurship program aimed at helping Seattle residents get their businesses off the ground using library resources.

Today’s Seattle library system finds itself at a crossroads. With 27 locations and more than 2.3 million books and materials, it is still that brick-and-mortar place where patrons can go to check out books, use reference materials and ask a librarian for help. But it’s also reinventing itself to remain relevant in the digital age and, along the way, fulfill its mission to be the community’s great equalizer.

Arriving at that sense of purpose took some soul searching, city librarian Marcellus Turner admits. He has led the Seattle library system for six years, during that time pushing for programs that expand the library’s services beyond traditional bounds while remaining tethered to its central mission. That mission, as Turner puts it, is to be “the connector and the convener that offers the public a space to gather, void of any intentional positioning.”

Turner has an easygoing style, and his face lights up as he explains how he fell in love with libraries as a fourth-grader when he was assigned a job in his school library. He worked in academic libraries before shifting to a public library system in Atlantic City 13 years ago. Since then, he has worked in systems near and far—absorbing along the way how important it is for libraries to adapt.

In Seattle, Turner shows up at library events and chats with patrons without disclosing who he is. He ends meetings by asking for a thumbs-up or thumbs-down from the crowd to assess how well he did. He is constantly seeking feedback, and he has made that a central principle for his staff as well.

“It’s a signal to the public that it’s a two-way street now. We want you involved in helping make these decisions,” he says.

At Seattle libraries, gathering this type of information takes on many forms: from hot spots and business skills courses to craft nights that teach children science, and guidance for the homeless on where to find a shelter.

What matters is that the library serves everyone, Turner says, from the well-to-do to those who are marginalized and have limited access to resources. “The library is a real place where real people come together,” Turner says. “It pushes back at private spaces and exclusion, and it says, ‘This is the place where all the roads can cross in this community.’”

It helps to be in a city that clearly loves its libraries, Turner adds. While many library systems are dealing with cutbacks and limited resources, Seattle’s can experiment because of the community’s support. Local residents made 11.5 million in-person and virtual visits to the library in 2016; 843 volunteers contribute 27,000 hours of service each year; and patrons flock to the 11,000 programs offered each year. Back in 1998, voters supported the libraries to the tune of $290.7 million, saying yes to a building program that ultimately saw the construction of four new branch libraries, expanded or renovated 22 others and built the now iconic downtown Central Library. Photos by Ben Lindbloom. Left: City librarian Marcellus Turner says today’s library needs to offer services that push beyond the traditional ones. Right: Jay Lyman co-leads one of those services, the Library to Business program which helps entrepreneurs and business owners with research and resources.

In 1989, the year Jodee Fenton became a Seattle librarian, the library system was particularly good at serving the needs of “middle class, upwardly mobile, mostly white individuals,” Fenton recalls in the friendly but straightforward tone that’s common in her profession. A high school student would ask a question for a research paper, and a librarian would know exactly how to help. Today, a student can still come to a librarian for help, but the library staff also spends significant time meeting with community groups, hosting listening sessions and chatting with patrons to uncover their needs and discover other ways libraries can serve all of the Seattle population.

“Today, we take our race and social justice initiative very seriously,” Fenton says. “We have often asked for community input in the past, but we weren’t always listening.”

Listening has yielded an array of unique programs that go beyond books and reference, yielding the library equivalent of the Apple slogan “There’s an app for that.” Along with traditional programs, such as children’s story times, the library hosts arts nights celebrating queer youth; reading circles at the Northwest African American Museum; public-school reading challenges; computer skills classes in Spanish, Chinese and Russian; game nights; and STEM (science, technology, engineering and math) crafts nights. Library patrons can get tax help, prepare for citizenship, learn to speak English or Chinese or how to improve a résumé, and—yes—even join a book group.

Want to launch a food truck? There’s a class for that, too, as part of the innovative Library to Business program, launched in 2015. It aims to help underserved communities that may lack resources and networks needed to build successful businesses.

It’s an extension of a library service that has existed for a century: If you were starting a new business in Seattle in the 1930s, you would go to the library to conduct market research. Today, an entrepreneur has other options—look online or buy access to a database, for example—but the library is still in the business of helping the city’s residents conduct such research for free.

What’s different is that the help might come in the form of an online chat with a librarian, remote access to a library database from a Starbucks or via a six-week course about getting your food business off the ground. Librarians will even set up hour-long one-on-one consultations to help business owners find the research and data they need for their specific goals.

Among the Library to Business class offerings are sessions in Spanish that walk students through how to get a city contract, and fairs where the public can ask questions of representatives of nonprofits and city, county and state governments.

“Often, [community members] don’t even know the list of the people they need to talk to. This not only gives them the list, it puts them all in the same room and you can go around and talk to them within an hour,” says Jay Lyman, co-lead of the Library to Business program.

Reetu Gupta, a Redmond resident and founder of the educational startup Cirkled In (which creates electronic student portfolios for college and scholarship applications), has become a sort of evangelist for the program since accidentally discovering it during a Startup Weekend event hosted at the Central Library three years ago. She and Lyman were recently invited to speak about the Seattle Public Library’s innovative resources for entrepreneurs at Austin’s SXSW festival.

Gupta, who grew up in India’s Haryana state, where there were no public libraries, never considered that the library could be a resource when starting her business. “Honestly, the library didn’t even cross my mind. I was just doing Google searches,” she says.

Lyman helped Gupta access the relevant databases, which the library purchases, to establish the market and need for her company. She has since turned to him repeatedly for reference help and urges other business owners to do the same.

“Information is more confusing now than it’s ever been,” Lyman says. “It’s hard to ferret out what is relevant and what’s going to help you the most. We’ve been down the little rabbit holes and found the dead ends and can save you time so you don’t run into that again.”

Many of the unconventional programs run by the library are funded by the Seattle Public Library Foundation, an independent organization that has raised more than $150 million for library services from area businesses, foundations and small donors—funding that serves to supplement public funding and helps to expand offerings. Foundation CEO Jonna Ward calls it the “research and development side of library capital,” and explains that programs like Library to Business serve to reintroduce patrons to libraries and their utility beyond books.

“There are a whole lot of people who use the libraries as kids, and habits come and go. When you have kids, look for a job or retire, those are moments that bring people back to the library, and they rediscover what it means to the community,” she says.

Growing up on a Montana ranch, Ward lived 40 miles from her school and the library. She discovered it more as a high school student, but made sure her children “grew up with the habit” of going to libraries.

Her kids are now of college age, and neither currently is an active library user, though Ward believes they will return to the system as they get older. She worries more about young people moving to Seattle from other cities—many with limited library systems—and those who are digital natives and didn’t necessarily grow up with libraries. “I worry about the long-term funding stability of the library system,” she says.

Turner, who recently completed a three-year vision for the library, remains optimistic. He says the library will continue to play a valuable role in convening people and connecting them to information for the foreseeable future.

“I am concerned, but I also believe in the power of this institution,” Turner says. “What I want to do is make sure we stay relevant for the ways that the public wants to use us. If we don’t move with the public, you’re already speaking to the demise of the library.”