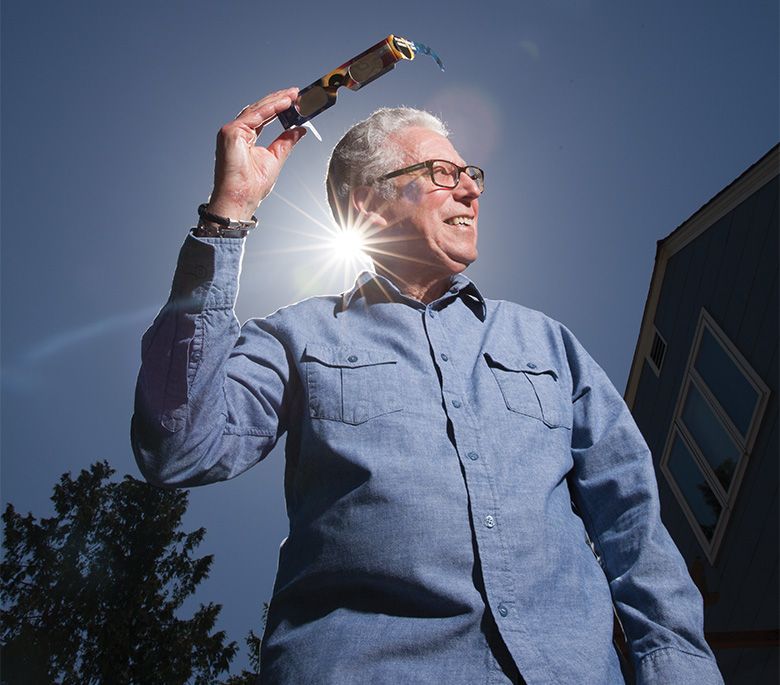 Award-winning science educator and author Dennis Schatz has been waiting decades for the next total solar eclipse in the United States, an event that will occur this year on August 21, when the moon passes between the sun and Earth, totally blocking the sun.

In 1979, the year of North America’s last total solar eclipse, Schatz boarded an Alaska Airlines flight with a group of “umbraphiles” (a word that literally means “shadow lovers”) to better view the sun’s corona—that’s the glowing ring seen around the shadow of the moon during a total eclipse, which is about the only time the corona is visible to the human eye. Under his instruction, passengers swapped seats at the aircraft’s window every 20 seconds so everyone got a turn to see the phenomenon.

Being able to properly view an eclipse has been so important to Schatz that, for the 1979 eclipse, he and his colleagues crafted thousands of pairs of “sun peeps,” a cardboard and Mylar version of the eclipse glasses that are sold today. Thanks to a partnership he started with the Google and Moore Foundations, now more than 5,000 libraries across the country provide these glasses to children and families. (Visit spl.org to find out where to get a pair.)

This year, Schatz, senior adviser at the Pacific Science Center and author of more than 20 books on subjects ranging from the cosmos to Thomas Edison, will have his eyes trained on the sky rather than on a stopwatch. When the rare sight is again visible, he’ll be in Oregon, one of 12 states in which to experience the total eclipse. Until then, he’s offering his expertise during a series of talks at the Pacific Science Center and local libraries about the event, which has been dubbed the Great American Eclipse.

“Anticipating this eclipse has been an exciting thing,” he says, “but the biggest thing is to make sure everybody experiences it.”

Vital Stats
solar-powered
While our neighbors in parts of Oregon and Idaho will be able to witness the total phenomenon, Seattle’s view is nothing to scoff at: For about two minutes, 93 percent of the sun will be blocked (no corona for us, unfortunately) at 10:20 a.m.

Title holder
Schatz has received several honors, including the Klumpke-Roberts Award, given by the Astronomical Society of the Pacific for contributions to the public appreciation and understanding of science. Past awardees have included Carl Sagan and Isaac Asimov.

Catch the sun
Two of Schatz’s four eclipse talks this month take place on August 12 at the New Holly and West Seattle public libraries, at 11 a.m. and 3 p.m., respectively. For more dates and times, contact the Pacific Science Center.

While eclipse viewing events have become some of the hottest tickets of the summer, there’s still time to make plans. Check out our roundup of wild, weird and perfectly normal eclipse events.