For the first time in a decade, the city rebid the homeless service contracts. 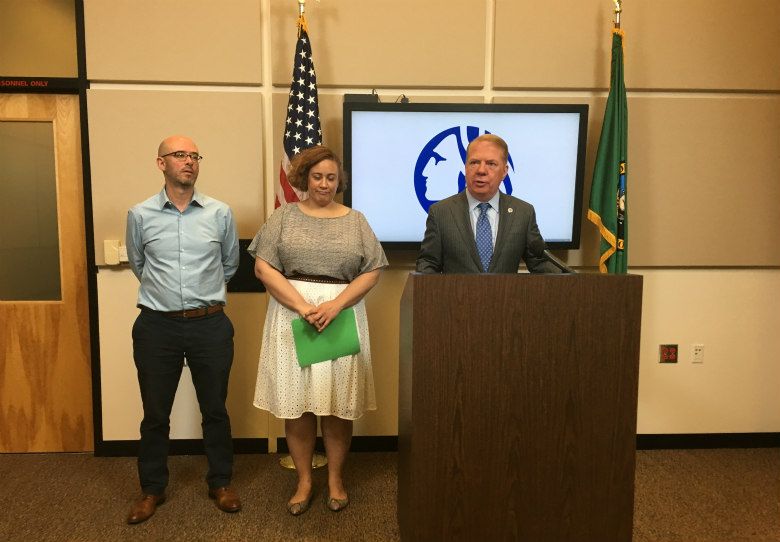 The city’s Human Services Department issued a request for proposals today for $30 million in homeless services—the first time in more than a decade that a majority of the city’s homelessness contracts have been put out for competitive bids.

At a press conference Wednesday morning, Mayor Ed Murray said he found it “shocking that this city let a decade go by before it looked at whether it was getting the performance it needs.” In reviewing the city’s homeless service contracts over the past year, Murray said, “We learned that our priorities were not aligned with best practices. We had, over the decades, spent more money on temporary remedies rather than permanent housing or preventing people from becoming homeless in the first place.”

The request focuses on programs that get people who are “literally homeless” into shelter “permanent housing”—largely through “rapid rehousing” with short-term rental assistance vouchers. The bidding process will favor programs that focus on Native Americans and African Americans, the two groups that are the most likely to become homeless and the least likely to escape homelessness into permanent housing.

In keeping with the Pathways Home plan released last year, which emphasizes “right-sizing” the homeless system by balancing survival services and permanent housing, the RFP will prioritize proposals that provide “permanent housing”—that is, housing on the private market, paid for with temporary vouchers.

This alone will be a shock to the current system. According to the Focus Strategies report on which many of the Pathways Home recommendations were based, “the majority of programs in Seattle/King County are designed for 12 to 18 month stays” and only about 63 percent of adult transitional housing residents exit into permanent housing (the rate for families is a little better, at 73 percent).

Homeless service providers’ effectiveness will be graded over the first six months of 2017, predominantly using five new minimum standards and target goals. The targets set goals for: exits to permanent housing, average length of shelter stays, entries to homelessness, return rates to homelessness and how many shelter beds are occupied on any given night. Agencies applying for funding must have met one of these minimum requirements to qualify. Those which hit the target goals get first priority.

If a project gets funding but doesn’t show progress toward meeting its targets, the city can decide to cut off funds. In future years, providers will be expected to start hitting their targets.

It’s unclear what sort of vouchers people exiting homelessness into permanent housing will be provided. But in the past, HSD has said that they will pay some portion of a person’s rent for between three and 12 months.

In an expensive housing market like Seattle’s, where the average renter spends about $1,750 a month on housing, this could push people further outside the city, away from services, employment opportunities and any community they may have had living in Seattle.

When asked whether moving black and Native American homeless people out of town might exacerbate the racial disparities the new bidding process is supposed to reduce, Lester responded, “I’m more interested in making sure that people are housed as a first priority” than making sure they’re housed in Seattle.

HUD’s definition of “literal homelessness,” it’s worth noting, does not include people who are temporarily staying with friends or relatives, people who move frequently or people coming out of prison with no place to go, unless they were in shelter at the time of their incarceration. It also doesn’t include people who are evicted from “permanent housing” when their subsidies run out, unless they end up back in the county’s formal homeless shelter system. Those who end up moving out of the county or doubling or tripling up in cheaper housing are still counted as permanent housing “successes.”

A report from a homeless advocacy group in Washington, D.C., which implemented a Pathways Home-style rapid rehousing system, found that many families fell off the “rapid rehousing cliff” when their vouchers ran out and they had to pay full market rent for their apartments.

Indeed, all the studies that have concluded that rapid rehousing is a success were in markets where rents are a fraction of what they cost in Seattle, such as Houston, Phoenix and Salt Lake City.

HSD director Lester says the D.C. study relies on unclear data and tracks outcomes that are related to poverty, not homelessness—in other words, it calls the D.C. program a failure based on outcomes like evictions and unstable housing, not literal homelessness. “I think poverty is a contributor to homelessness, but this RFP is very focused on not necessarily eliminating poverty or reducing poverty, but making sure folks are exiting to permanent housing,” Lester says.

The deadline for service providers to respond to the city’s RFP is September 5.