Seventy years ago this month, hundreds of Bainbridge Island residents were given 6 days to leave the 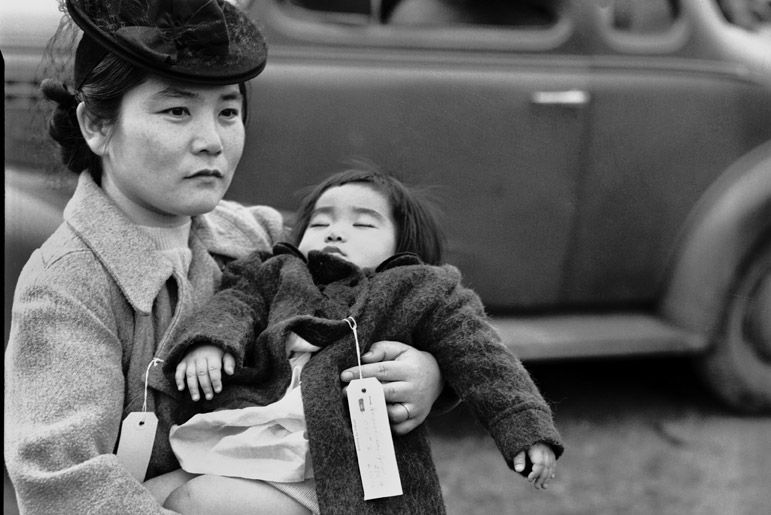 A wrenching chapter in our region’s history was written 70 years ago this month: the internment of thousands of Japanese Americans. In 1942, in the wake of the Pearl Harbor attack, amidst war hysteria, racism and fears of sabotage, President Roosevelt signed Executive Order 9066, forcing the evacuation of 120,000 people of Japanese ancestry (two-thirds of them U.S. citizens) to “war relocation camps”—detention centers—primarily located in California and Arizona. Swept up in the relocation were hundreds of Bainbridge Island residents; they were given a mere six days to liquidate or secure arrangements for their homes, farms and businesses.

“It was my first train trip, first time out of state,” says Fumiko Hayashida of her forced evacuation. The 100-year-old Beacon Hill resident shares vivid memories over a pot of hojicha in the tearoom at the historic Panama Hotel in Seattle’s International District. Hayashida recalls dressing in her finest one cold March day, because the government only allowed them to take the clothes on their backs and one suitcase per family. She and her husband, Saburo, had two small children and a third on the way when they abandoned their 50-acre Bainbridge Island strawberry farm and boarded the train to the high desert of California.

An iconic 1942 Seattle Post-Intelligencer photo (shown at left and on display both at Seattle’s Wing Luke Museum of the Asian Pacific American Experience and the Bainbridge Island Historical Museum), shows Hayashida, then 31, clutching her sleeping baby. She is stylishly dressed and wearing a veiled hat; her expression is unreadable. Identification tags dangle from the coat of both mother and child, uneasily suggesting a human cargo. In fact, she and more than 250 others who make up Bainbridge Island’s Nikkei (Japanese immigrants and their descendants) community were about to be loaded onto a Seattle-bound ferry, then shipped by train to the Manzanar War Relocation Center in California’s Mojave Desert.

A poignant memorial of the time—photographs by landscape photographer Ansel Adams—is now on display at the Bainbridge Island Historical Museum. Adams recorded daily life in California’s main detention center in Ansel Adams: A Portrait of Manzanar, an invaluable record, since prisoners were not allowed to take pictures. Also at the BIHM is For the Sake of the Children: Kodomo No Tame Ni, a fascinating permanent exhibit telling the story of Japanese settlers to the island since 1883.

Before World War II, immigrants from Scandinavia and other parts of Europe labored amicably alongside those from Japan, China, Hawaii and the Philippines to make their fortunes on Bainbridge. During the internment, many Bainbridge Islanders cared for their evacuated neighbors’ property while they were away. Hayashida’s family eventually regained possession of their Bainbridge Island strawberry farm; the island was one of the rare communities that welcomed Japanese Americans back home after the war, and The Bainbridge Review was the only newspaper on the West Coast to defend the rights of local Japanese after the executive order was announced.

The three years of the internment forever changed the lives of hundreds of Northwesterners. By 1940, Seattle’s Japantown—then located south of Yesler on Main and Jackson and between Fifth and 23rd avenues—was almost a half-century old, a bustling community with Japanese-operated hotels and restaurants; small businesses such as grocers, barbershops, variety stores and laundries; and a professional class that included doctors, lawyers, architects and real estate agents. The Wing Luke Museum exhibit, Vintage Japantown: Through the Lens of the Takano Studio illuminates the nihonmachi (Japanese community) through period photographs.

But with Executive Order 9066, 10,000 Nikkei living in King County became “enemy aliens” overnight. Seattle Mayor Earl Millikin declared that a handful of traitors would likely “burn this town down and let the Japanese planes come in and bring on something that would dwarf Pearl Harbor.” Denied due process, most of the county’s Japanese Americans were shipped to the Minidoka center near Hunt, Idaho, after transitional detention (in barracks cobbled from racehorse stables) at the Puyallup Fairgrounds.

The majority of Nikkei in rural Western Washington were incarcerated in the Tule Lake, California internment camp—back then, called a “concentration camp,” until that term was co-opted by the Nazis. None of the prisoners was ever charged with a crime.

The repercussions of that experience will be illuminated at the Wing Luke Museum on a day of documentary film screenings (February 18). Conscience and the Constitution, With Honors Denied and Transcending: The Wat Misaka Story all tell personal stories of Japanese Americans overcoming mistreatment by their own government.

With the anniversary in mind, local internment survivors are sharing their stories of loss and upheaval. Writer Larry Matsuda, 66, taps into the enormity of the Nikkei experience through the medium of poetry. During a 27-year career with the Seattle school district, Matsuda taught literature at Sharples Junior High School (now Aki Kurose Middle School) in Rainier Valley, where he introduced the first Asian-American history course in a Washington public school. Matsuda’s family was incarcerated in Minidoka—he was born there; they lost their family home and First Hill grocery; his mother suffered a miscarriage in the camp. Friends and neighbors succumbed to suicide.

Matsuda mines these events in his poem, “The Noble Thing,” from his 2010 collection of poetry, A Cold Wind from Idaho (Black Lawrence Press):

Depression took Mom away
like invisible armed guards. She was
a stranger—a stick-like figure with arms
and legs poking out of a white smock,
pacing the sidewalk next to the Western
State Hospital turn-around.
Dad never talked about it, none of it.
I never heard him say the word Minidoka…
Gaman, ‘endure the unbearable
with dignity.’

The overarching theme of his work is “never let it happen again”; he also explores the pain of being betrayed by an entity that was supposed to protect.

The internment shook lives in many local communities. Seattle author Keith Egawa’s grandparents lived in Woodinville at the time. His grandfather Fred Egawa was Japanese-American; his grandmother Grace Egawa was pure Lummi Indian. “Because my grandma was Indian, she and the children didn’t have to go to the camp,” Egawa says. “But they missed my grandpa so much that they volunteered to be interned with him [in Minidoka]. I was told by my aunt that it was very difficult—the insult of being imprisoned and losing their home—but that the camaraderie among those interned was very strong.”

The violation of Japanese Americans’ constitutional rights was finally acknowledged in 1988—43 years after the internment ended in 1945—when President Ronald Reagan signed the Civil Liberties Act, in which the U.S. government made a formal apology and paid restitution of $20,000 to each internment survivor.

Honoring the victims and learning from the mistakes of the past are the focus now, according to Clarence Moriwaki, chairman of the Bainbridge Island Japanese American Memorial Committee. He spearheaded the creation of the Bainbridge Island Japanese American Exclusion Memorial, dedicated in 2011 on the site of the former Eagledale ferry dock, where 227 Japanese Americans boarded the ferry to Seattle. The serpentine red-cedar wall, designed by architect Johnpaul Jones, is called “Nidoto Nai Yoni” (“Let it not happen again”). “What’s the takeaway? To learn from this moment of history,” says Moriwaki. “Five [U.S.] presidents have apologized [for the internment]. ….It’s not about guilt or shame. We wanted to send a different message.”