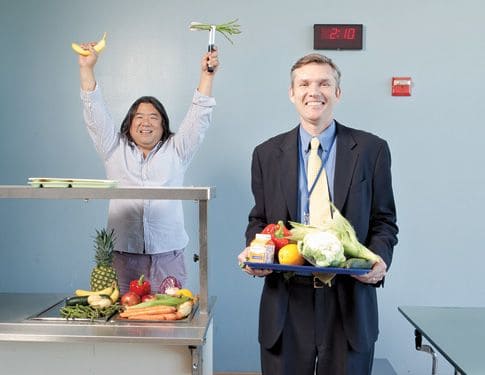 Paging Jamie Oliver! There are chicken nuggets and sausage-on-a-stick on the Seattle Public Schools’ lunch menu. The ravioli comes from a Chef Boyardee can. But like the popular British chef whose U.S. television documentary, Lunch Line, exposes the horrors of school lunchrooms, the Seattle school district’s new head of nutrition services, Eric Boutin, is fighting on the front lines for improvement.

On some days, lunch entrées now include homemade hummus and feature a locally grown “harvest of the month” (plums this month, cucumbers for October). Focus groups of children are taste-testing dishes like sautéed kale with brown rice. Workers in the 40,000-square-foot central kitchen mix nutritious spinach in with the romaine-and-iceberg salads. Through King County grant dollars aimed at promoting health and preventing chronic disease, the kitchen staff is getting tutorials in whole foods cooking from nutritionists and chef instructors, learning everything from knife skills to folding pot stickers.

It’s all about the kids, of course. But it’s more complicated than calculus class to figure out how to get good food into kids via 90 separate lunchrooms, some only set up for prepacked “grab and go” meals.

The big health push comes partly from Boutin, who arrived last year with a reputation for improving cafeteria quality in past jobs. An advocate of the slow food movement (think unprocessed, nutritious, community based), Boutin is committed to serving whole foods in the schools, preferably using fruits and vegetables from local growers, and inspiring kitchen cooks to use their own talents to incorporate whole foods. His previous work in Auburn schools brought in more roasted chickens and fewer breaded nuggets, favoring whole Skagit potatoes over prefab tater tots. He helped facilitate a ban on chocolate milk. He encouraged a push for student gardens.

In Seattle, he’s leading a kitchen team that’s already committed to such goals—but faces indigestible hurdles. There’s a Byzantine web of mandates, logistics, budget restrictions—and, perhaps most challenging of all, the palates of more than 47,000 children. (Try out something too strange and new? “We’ve got kids crying in the line,” says Wendy Weyer, the department’s assistant director and a registered dietician.)

Seattle has company. Improving school lunches is hotter than Hot Pockets, with everyone up to first lady Michelle Obama promoting healthy foods, local produce and chefs in the schools. But moving from hype to reality comes down to cold business sense. If kids turn up their noses at stir-fries or plain milk or roasted potatoes, Boutin notes, the school doesn’t sell enough to make ends meet. The easy, cheap foods that make chefs and dieticians wince—the prefab chicken “drummies,” the breaded mozzarella sticks—are the popular ones that pay the bills. It’s taking time to train the kitchens to cook differently, and the kids and parents to eat differently.

That, Boutin can handle, and he’s got some high-powered help. Eric Tanaka, executive chef of Tom Douglas Restaurants, is spending all his spare cooking time with the district’s kitchen staff and students, helping develop recipes that work for both. (First up: The rice and kale, and a “super tasty” Thai larb salad, made with grains and veggies wrapped in lettuce leaves, seasoned with fresh herbs.)

The bigger hurdle is Boutin’s budget squeeze. The district has approximately $1.20 per meal to squeeze in its federally required calories, protein, fruits, vegetables and vitamins—without going over allowed allotments of fat and sodium. A recent 6-cent increase in federal reimbursements came with an accompanying 51 cents in phased-in new mandates. Extra dollars from the district would be welcomed, but it would come out of the general fund, which Boutin says is already underfunded.

“The day we have the chicken nuggets, none of us really want to serve them, but they’re what we can get at the commodity level,” says operations manager Randall Guzzardo. Serving nuggets one day—with freshly made dipping sauce, at least—saves enough money to do other things better, Guzzardo says. Exhibit A: altering the chili recipe from one heavy on prefab beef crumbles and dehydrated additives into a vegetarian version using local beans, fresh onions, garlic, cilantro and cumin. The revamped real-food version, simmering in 72-gallon vats, costs an extra 10 to 15 cents per serving more—but it’s both healthy and hugely popular, a holy grail combination for the central kitchen.

That local and seasonal produce? lt’s hard for small farmers to grow it in the reliable quantities the district needs in order to comply with federal paperwork and, more significantly, to work on district timetables and budgets. Still, the central kitchen is celebrating successes like the 17,500 organic Cripps Pink apples that arrived in January from a local farm, priced “just a skootch more” than industrial growers. An equally big bonus: The apples were hand-size, perfect for elementary kids.

“When I serve plums, I’m probably losing money that day,” Guzzardo says. But: “There are so many kids [for whom] this is their only balanced meal of the day. It’s their only chance to get a piece of fresh fruit.”

Boutin and his team are hoping to introduce more kid-centered recipes. They’re encouraging more local farmers to work with the lunchrooms. And they’re working on cutting salt and fat, and increasing whole grains.

It’s a challenge, but they feel they’re on a roll—because their rolls are mixed, proofed and baked from scratch daily, with  33 percent whole-wheat flour.