Bulkheads and other forms of ‘armoring’ line 92 percent of Seattle’s marine shoreline. Removing these can help restore habitat for endangered species—but can also erode land. Not surprisingly, some homeowners are resisting 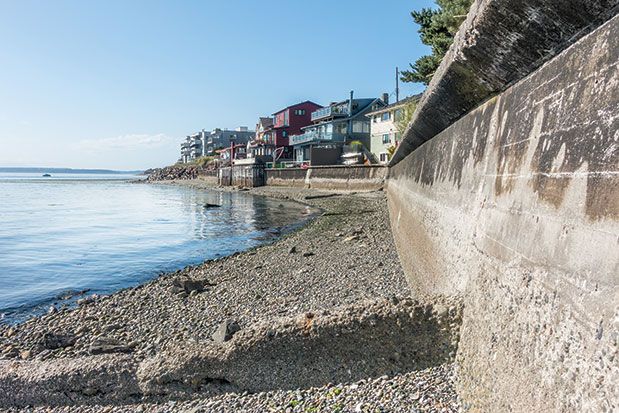 On a sunny autumn morning, an ebullient Pat Collier steps down to the beach and waves her hand at the expanse of sand below her Maury Island home. “Look how much I’ve gained!” the 80-year-old says. She’s referring to her beach, which has been expanding since 2006, when she removed most of her bulkhead—a retaining wall built to stop beach erosion. The beach is still 288 feet long, but it’s been transformed from a narrow strip of gravel to something much deeper and more natural-looking. Over time, a bulkhead, which blocks the erosion of bluffs, tends to create a rockier beach, starved of sediment. In exchange for more beach, the Sound has stolen some of her land, but she’s OK with that.

The beach near the water is coarse and cobbled, but the new strand above it is soft sand, fringed with bleached driftwood logs, which form natural benches with a view of Mount Rainier. Collier says that friends who see the new beach often exclaim at her land loss, but many people, including her great-grandkids, prefer spending time on the beach rather than in her yard.

A former schoolteacher who retired to the island in 1992, Collier removed the bulkhead rather than repair it when it began to fail in 2006. “I had been learning more and more about the effects of bulkheads on this ecosystem,” she says.

Science shows that shoreline armoring—which includes structures such as bulkheads, riprap armoring (big chunks of jumbled rocks) and seawalls—can profoundly disrupt the connection between land and Puget Sound’s waters, degrading habitat for bugs, birds and fish, including endangered chinook salmon and orcas that rely on salmon for food. Shorelines on Lake Washington and Lake Sammamish are also commonly armored.

Many homeowners install and repair these structures to slow natural erosion, or just to create a tidy line between land and sea. According to the Washington State Department of Ecology, bulkheads and other armoring are often unnecessary for erosion control. Granted, some structures would be at imminent risk if bulkheads were removed, such as a home built very close to the shore in a location pounded by waves during storms. Extreme examples of this are homes that were built by filling in part of the intertidal zone, before regulations restricted it. Much local armoring is very old, installed before shoreline management policy changes in the 1970s. “They basically built on the upper beach,” explains Kollin Higgins, senior ecologist for King County.

State and federal agencies have been working for years to remove unneeded armoring on public land, and counties have passed regulations on most of Puget Sound aimed at making bulkheads a last resort, to be used only where there is proof that erosion will directly threaten a home or building.

Still, nearly one-third of Puget Sound’s 2,500 miles of shoreline remain armored, including about 50 percent of Vashon and Maury islands, and 92 percent of marine shoreline in Seattle. The Washington Department of Fish and Wildlife and the Puget Sound Partnership have each set a goal: that the total miles of Puget Sound armoring removed should be greater than the total miles added from 2011 to 2020. New research shows 2014 and 2015 were the first two years in which this goal was met. This is good news. “We’re at a point where just stopping new armoring isn’t enough,” says Greg Rabourn, who works on armoring removal and shoreline restoration projects for King County. “We need to reverse the damage. Puget Sound is really sick.”

Image by: Maria Billorou
Pat Collier stands in front of the only remaining bulkhead on her Maury Island property. The beach behind her expanded after the bulkhead was removed from there

One sign of this deteriorating ecosystem is a 76 percent rise in at-risk species. According to The SeaDoc Society, which conducts and sponsors scientific research in the Salish Sea (Puget Sound, the Strait of Juan de Fuca, and the Strait of Georgia in British Columbia), the number of marine wildlife species listed as threatened or endangered there rose from 64 to 113 species between 2008 and 2011.

Private property owners will play a decisive role in improving shoreline health, according to the Shore Friendly Report, commissioned by the Department of Fish and Wildlife and the Washington State Department of Natural Resources. About 57 percent of Puget Sound shoreline is in private hands, and 48 percent of those residential parcels are armored. Only 46 percent of the parcels are owner-occupied. The study says that shoreline landowners feel a personal and emotional connection to Puget Sound; falsely believe that it is in good health; and often don’t understand the impacts of armor on the Sound—and worry that removing it will lead to property damage.

Puget Sound property owners continue to repair and construct bulkheads, often without permits. Last year, the University of Washington Tacoma’s Puget Sound Institute found unpermitted or noncompliant armoring at many sites and concluded that agencies lack funding to enforce rules, even when laws and guidelines are in place.

Images by: Jason Toft (UW Team)
Studying wrack to avoid eco-ruin: At a research site on Maury Island where armoring was removed, UW scientists and volunteers use a grid to measure and monitor changes in the wrack (the band of seaweed); these will be compared with sites where armoring hasn’t been removed, and others where the shoreline was never armored

If a homeowner does want to remove armoring, help may be available. Collier received assistance from the King Conservation District, which shares cost and provides education and technical assistance to remove bulkheads and restore shoreline for qualifying properties. Other homeowners may be able to install “softshore armoring,” a more Sound-friendly approach to erosion control (by resloping a beach or adding gravel, rocks, logs and vegetation).

Rabourn works for an ongoing King County program that locates Vashon and Maury island homeowners who are interested in selling their qualifying shoreline property at its appraised value. The county then removes armoring on those beaches.

Image by: Helen Berry
UW research biologist Megan Dethier uses a quadrat grid to measure the composition of  this piece of shoreline, which she’s monitoring for changes. It may contain clams, worms, barnacles and other crustaseans. The yellow tape is used to ensure the same area is sampled consistently over time

Removal and restoration efforts gained new urgency last April, when UW scientists reported that armoring is even worse for the shoreline than was previously understood. Its broad, five-year study, led by UW research biology professor Megan Dethier, looked at the Salish Sea from Puget Sound up to the Canadian border. Over time, armoring changed the texture and shape of the beaches they studied.

The study found that armoring a shoreline makes sediment coarser and beaches steeper, and also decreases the number of logs and “wrack” (the band of seaweed, leaf litter and other materials) on the beach, depleting invertebrates that make the wrack line a buffet for salmon and other species including sea birds.

Armoring can be devastating for sand lance and surf smelt that spawn on local beaches. These are “forage fish,” so called because they provide food for salmon, seabirds and other life. “Those fish spawn on the upper beach,” says King County’s Higgins. “A lot of the armoring buried their habitat, leaving no habitat for them to spawn in.”

Beaches with bulkheads also tend to lack tree cover. King County studies show that chinook salmon feed on insects that fall from these trees and into the water.

For the study, Dethier and her collaborators gathered identical data sets for 65 pairs of sites around the Salish Sea, comparing armored and non-armored beaches. “We made so many cold calls,” says Dethier. “Some people said it would be fine, and we had one or two say they would pull out a gun if we tried to do the research on their property,” she says.

It was the most political issue she has ever studied as a scientist. “People are understandably afraid when you’re talking about a million-dollar home close to the water,” she says.

A team ranging from four to six people visited each beach, “sampling the heck out of everything,” says Dethier. There were no threats, just a lot of questions, and occasionally neighbors who brought scientists coffee and cookies as they looked at beach wrack, numbers of logs, invertebrate presence, beach width and slope, and the size of beach sediment.

Researchers found armoring has an outsized effect when it blocks sediment from “feeder bluffs” from eroding onto a beach.

“The reason there are beaches on the Salish Sea is because bluffs erode and bring sediment down to those beaches,” says Dethier. “If you are putting armoring on a beach with one of those unusually important bluffs, that is a much bigger deal than on a lower bank that isn’t eroding much.” About 6,000 parcels on Puget Sound have armored feeder bluffs, and 843 of those parcels do not have a home on them.

The more armoring on a stretch of a beach, the greater the impact. “Sometimes people say adding more doesn’t matter, because it’s already 50 percent armored anyway. But it does matter,” Dethier says.

When armoring is removed, beach health can improve quickly, says Jason Toft, senior research scientist at the UW’s School of Aquatic and Fishery Science, who worked with Dethier on her study, and is leading another study of recent Puget Sound beach restoration projects.

He points to Seahurst Park in Burien, where a bulkhead was removed in 2005 and another in 2014, for a total of nearly 3,000 feet of armoring removal. Within days, a wrack line washed up, logs settled, and eventually new shore plantings grew in. “It’s restoring that link in the food web,” he says.

Back at Pat Collier’s beach, Greg Rabourn, viewing the expanded beach for the first time, says he’s excited by the changes on her property. Rabourn checks some research data on his phone, and then offers Collier some good news. “They found sand lance spawning here on your beach,” he says, proof that the removal had led to just the environmental improvements she was hoping for.

Collier seems happy, though not surprised. “Every season, every year, things get nicer on this beach,” she says.