Arts and culture are a significant focus of the vision for Seattle’s new waterfront, including permanent art installations by local and internationally renowned artists 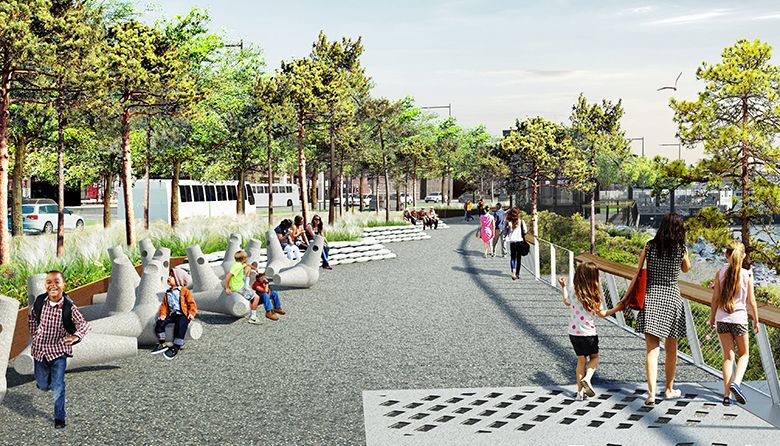 James Corner Field Operations, courtesy of the City of Seattle

This article is part of our Seattle Waterfront feature.

Shaun Peterson, a member of the Puyallup Tribe and a contemporary Coast Salish artist, is developing three bronze and red cedar figures that will overlook Puget Sound, reflecting the historic connection between the Coast Salish tribes and the Seattle waterfront.

Many of Winnipeg-based Cedric Bomford’s previous structural installations have come in the form of explorable, interactive spaces, such as towers and seating areas, and play on the power and politics embedded in architecture. He will work with a team of architects, planners and city designers to develop play areas and equipment for the new waterfront.

The waterfront’s new public piers will be adorned with an installation by internationally renowned artist and MacArthur Fellowship recipient Ann Hamilton of Ohio. She is known for her large-scale sensory installations, including the Seattle Public Library’s distinctive raised-text floor by the Fourth Avenue entrance.

After emigrating from Japan to Seattle, Norie Sato spent years working out of a studio near the Alaskan Way Viaduct. Sato’s waterfront artwork will be a 30-foot-long, curved, color-shifting glass wall at Union Street and Western Avenue, inspired by her experience taking in the reflections of Elliott Bay’s waters.

Buster Simpson, a Seattle-based artist whose large-scale sculptures and installations can be seen across the city, will create permanently sited public artwork at the habitat beach—part of the new seawall. The artwork will integrate natural and man-made materials that will contribute to habitat restoration by reducing the erosive forces of the bay’s tides near S Washington Street and Yesler Way.

Virginia-based sound artist Stephen Vitiello’s contribution, related to the sound-filled setting of the Seattle waterfront, will be located by Pier 62. The work is a series of sculpted bells engineered to strike based on the specific tidal action taking place below them.

Washington native and sculptor Oscar Tuazon will collaborate with his brother, glassblower and artist Elias Hansen, and architect Antoine Rocca on a major installation along the water from Columbia Street to Madison Street. The sculpture will be designed to evoke the longhouses used by the Coast Salish tribes.