Seeing the Light: New Belltown Condo Takes Glass and Architecture to the Next Level Ian Gillespie’s latest to-build brainchild, First Light, is slated to break ground later this year, in more ways than one. The condo tower is one of a trio of artful residential real estate projects that the inventive Vancouver, British Columbia, developer and Westbank founder, known for boldly allying art and architecture, is bringing to Seattle.

First Light—the only condo project of the three—is set to open in the summer of 2022, not far from 1200 Stewart, Gillespie’s Denny Triangle mixed-use twin-towers project. With 1,051 market-rate rental units, 1200 Stewart has a planned completion date in 2021.

First Light, too, was originally going to be rentals, says Gillespie. “But then we realized the dearth of quality for-sale products.”

Top-drawer quality is on deck for these high-rise condos (right up to First Light’s 48th-floor rooftop pool deck). The Belltown tower will feature a workspace and retail mix at its base, and some 459 luxury condominiums (from $500,000 studios to $2.4 million three-bedroom apartments). Gillespie tapped his longtime British Columbia–based collaborator (and University of Washington architecture school alum) James K.M. Cheng as First Light’s architect and Seattle-based, Pilchuck Glass School–trained artist John Hogan to imbue the building with light-drawing and light-enhancing glass. As well as the building’s interior glass elements such as light sculptures, its exterior base and rooftop will be dressed in a glass veil. 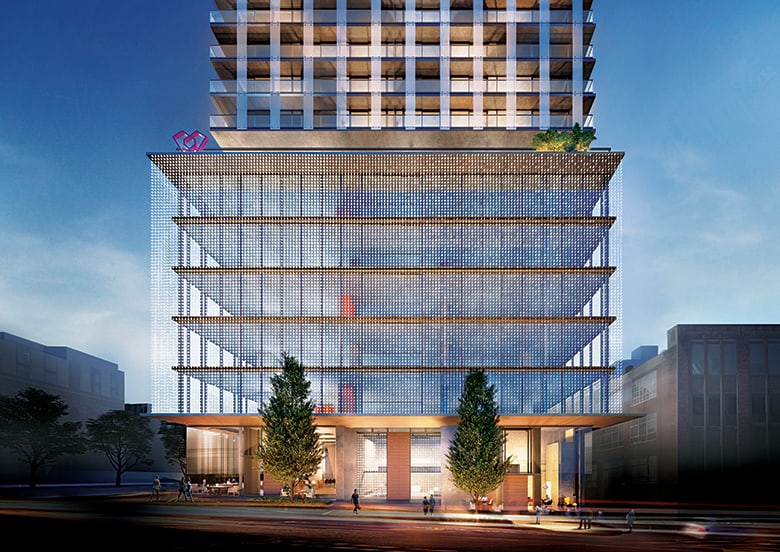 THE HIGH LIFE:The lower floors will be encased in a distinctive glass veil

“Everything starts with that veil,” says Gillespie, who got the idea from a green-screen-wrapped building near his Tokyo office. “When you think about glass as a medium, it’s all about your use of light…and basically the idea was to not just change the way the building reacts to the city, but also change the way it would feel from within…like you’re in a boathouse with the light bouncing off the water and onto the ceiling.”

Ambitious artful considerations are nothing new for the developer, famed for his jaw-dropping Bjarke Ingels–designed Vancouver House—a twisting honeycombed sculpture of a building nimbly slotted into a triangular slice near Vancouver’s Granville Island. And while some have accused him of “art washing”—employing art merely as a lure to sell high-end properties—Gillespie says what appalls him is artless urban design. “That’s what makes me so unhappy when I walk around and see all these wasted opportunities,” he says.

First Light isn’t even Gillespie’s artiest architectural act planned for Seattle. That would be 707 Terry (First Hill, 707 Terry St.), set to rise in the spring 2021 on a parking lot right next to, and once owned by, the Frye Art Museum. Details of the property sale—which are not being disclosed by either party—may include some benefits to the museum. Gillespie stresses, “Effectively, this is a collaboration with the Frye museum…an extension of the museum campus…and an opportunity to help elevate and celebrate a museum in Seattle.” 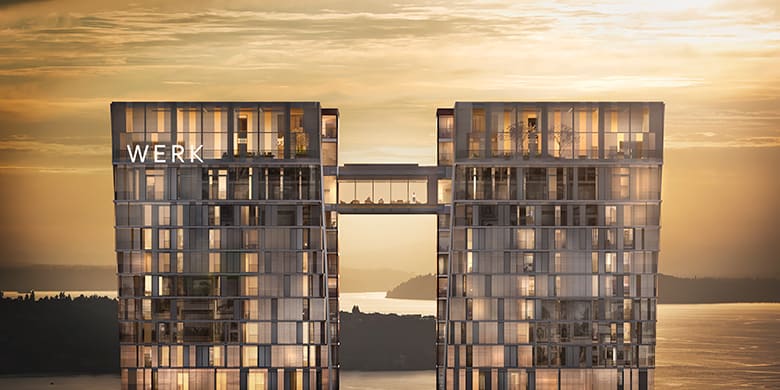 CROSS WALK: A skybridge will connect 707 Terry’s two leaning towers; pixelated images from the
Frye Art Musem’s collection will be displayed on the facades of the buildings

The project boasts a daring design by Seattle’s own Perkins+Will architecture firm. It comprises two 33-story “splaying” or “leaning” towers linked by a sky-high glass pedestrian bridge. The showstopper, though, is one helluva art array—a facade that will be a literal work of art. “We are digitizing the permanent collection of the Frye and then we will pixelate that over the entire facade of the project,” explains an animated Gillespie.

This could be good news for Seattle since this B.C. developer, who has had an office in Seattle since 2016, seems intent on a long-term relationship. Or, as Gillespie put it, “We will buy more sites.”

What’s a luxe urban dwelling without luxe urban amenities? In First Light, those perks will start in its lobby with an art gallery, a bike clubhouse, a luxury-car-sharing service and a 24/7 concierge/security service. The building’s top three floors will be spoiled with views and be dedicated to residents’ better living, with offerings such as a screening lounge and a wellness center. The top floor offers a Space Needle–facing floating lap pool, a secret garden and a pet play (and “relief”) area. View the building’s kitchen and bath plan and moody Northwest material palette at the First Light Presentation Center (11 a.m.–5 p.m., daily; Belltown, 300 Virginia St.; 206.620.2568). A temporary exhibit, Light as a Common Thread, is being shown at the same location. It tells the backstory of Westbank and the creation of First Light via headphone-accessorized video panels and a few gleaming works of glass by project artist John Hogan.

Editor’s Note: This story has been updated from the print edition.