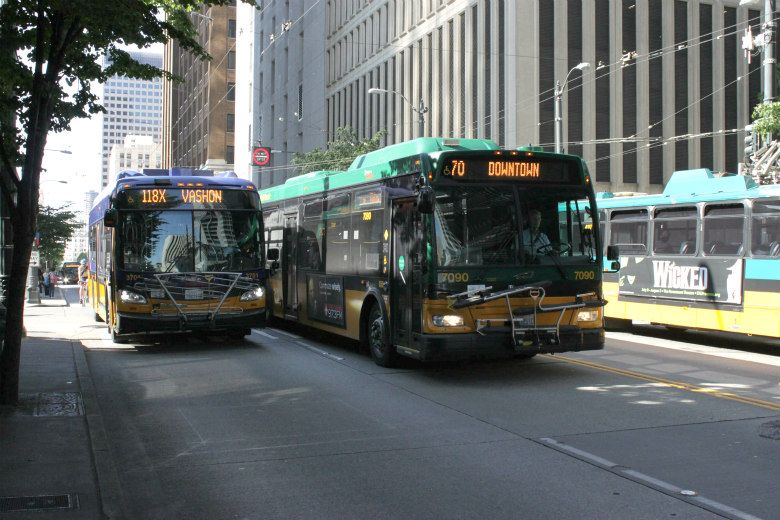 Last month the Seattle Times reported that hundreds of new Amazon interns, each wearing identical company-issued black backpacks, are crowding out other commuters on King County Metro’s Route 70. The overcrowded buses, which forced drivers to skip some stops when full, led Metro to take the unusual step of adding service to the route for the rest of the summer without the extensive public process that typically informs long-term service increases.

Metro service development manager Bill Bryant says the bus agency routinely provides extra service for special events, like Pride or the Women’s March, and temporary disruption such as the periodic closure of the Alaskan Way Viaduct. “We really do not want to see any situation where specific trips on a route are passing customers by on a regular basis,” he says. “We received multiple reports that people were getting passed by [on Route 70], and we decided to pull the trigger.”

According to Metro spokesman Scott Gutierrez, about 400 more people than usual were riding Route 70 when Metro decided to add service. The current uptick in service during morning rush hour—two extra buses between 6:30 and 10:30 a.m.—is costing Metro about $3,600 a week.

Shefali Ranganathan, director of the transit advocacy group Transportation Choices Coalition, says the “bottom-line question is, should Metro explore a broader partnership with Amazon where Amazon buys service hours from Metro” to mitigate their impact on the system. “Maybe this is something [Metro] should approach not just as a one-off [service improvement] but as a broader partnership that would benefit Amazon and the broader community, which is what Microsoft does,” Ranganathan says.

There’s precedent for this: Back in 2012, Amazon paid for the South Lake Union streetcar to run more frequently, although that money was compensation for land the city gave Amazon to expand its South Lake Union campus.

Microsoft, somewhat controversially, has given its workers a way to opt out of the public transit system entirely by creating a private option, the Microsoft Connector, which has grown into the largest private regional bus system in the nation. Since last year, Amazon has offered its own limited shuttle service, called Amazon Ride, which runs four shuttle buses between the company’s two main campuses in South Lake Union and the University District. The company also spends $12 million on ORCA transit passes for its employees.

Of course, Amazon’s expansion in the city isn’t limited to a few hundred summer interns. Earlier this year, the company announced that it was hiring 100,000 new U.S. employees by mid-2018, and advertised more than 9,000 new job openings in Seattle. Most of those new jobs will be in South Lake Union, meaning that the pressure on Metro service will only grow. “The growth in South Lake Union, just across the board, continues,” Bryant says. “The choice to add service to keep customers moving and to prevent pass-bys is not a hard choice for us.”

As a transit agency charged with getting cars off the roads, Metro wants to make sure all those new customers keep coming back to use its service, rather than giving up and driving to work alone. But Metro has also made a commitment, through its service guidelines, to serve low-income and minority communities, such as Southeast Seattle. When Metro decides where to add service during its twice-annual service adjustment process, it looks not just at demand but at how well the system is serving the goal of racial equity.

A few tens of thousands of dollars shifted over to South Lake Union over the summer may not sound like much. But if Amazon’s growth creates the demand for permanent shifts in service, that could put Metro in the position of choosing between racial equity and full buses passing people by.

Amazon, which provided information on its existing shuttle service through a spokesman, did not respond to a request for information about any plans to expand its shuttle service. Although the company confirmed that it is actively working with Metro to plan for increased ridership from the UW to South Lake Union, Bryant says “we haven’t had any significant conversations with Amazon about significantly increasing their shuttle service.”