In some ways, what's old is new with the Needle's $100 million makeover. 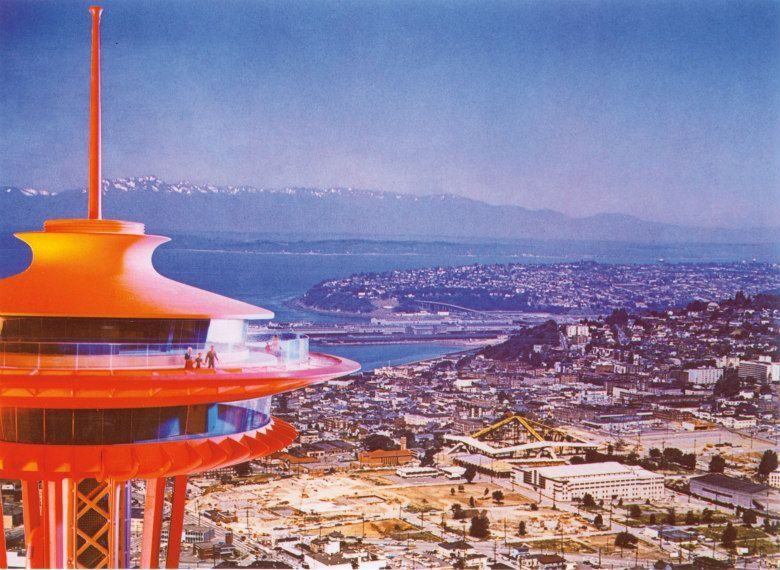 The Space Needle has announced a major renovation and remodel at an estimated cost of $100 million dollars. The Needle is privately owned by the Wright family whose patriarchs helped build it for the Century 21 Exposition in 1962.

I have been a consulting historian on the project. The Needle seeks to both restore and add new features while operating within the preservation guidelines connected to its landmark status. You can find a rundown of the Century Project here.

I thought I could add some interesting items from a historical perspective. The Seattle architecture firm of Olson Kundig has found some very cool solutions for “updating” the Needle while embracing its past.

For example, some of the “new” features are in fact ones envisioned by the tower’s designers. The new plan calls for double elevators to be installed on two sides of the Needle in a later phase of the Century Project. Early renderings of the Needle show stacked double elevators, but only single elevators were installed on the three sides of the tripod. This doubling will allow for greater passenger capacity during peak times and it reflects an option that was considered well into the original design phase.

The observation deck will get bigger windows with less obstruction. On the exterior, floor-to-ceiling glass will be installed. This too has a history: early renderings and a scale model of the Needle from 1961 show a glass wall, open at the top, encircling the exterior deck. This is very much like the one that will be installed during the remodel.

There are some things, however, that will not be restored or make a comeback. They include:

The Cage: The wire “cage” around the observation deck will be removed. The original lower barrier with panes of glass was modified back in the ‘70s and later. Wire and mesh barriers were put up as safety measures to stop unauthorized jumpers (with parachutes and without). The new glass should serve this safety function with less clutter.

The Torch: Most people have forgotten, but the Needle once featured a flaming, natural gas torch on top—this was the era of the tiki trend, after all. The torch was lighted at night during the fair and various chemicals added to the flames gave it a kind of rainbow look. It proved problematic. Maintenance was a hassle—workers had to crawl up in the middle of the night to scrub soot. Wind at that altitude was a constant problem—it was hard to keep it lit.

After the fair, it was used on special occasions. It wasn’t very eco-friendly either. Washington Natural Gas (now Puget Sound Energy) estimated that it burned enough gas to heat 125 average homes. The torch was eventually replaced with the current mast—essentially a giant flagpole and warning beacon for aviators. Eye of the Needle: This was the name of the original restaurant during the fair, made famous by Elvis Presley in the film, It Happened at the World’s Fair as he wooed his love interest over dinner there (though the scene was actually filmed at MGM studios on a recreated set). The original color scheme was orange, brown and gold. It was immediately remodeled after the fair and has been many times since. The restaurant will receive another major re-do; the rotating floor tech will be updated and replaced with revolving glass floor and a grand staircase will connect the restaurant and O-Deck.

The Original Colors: The renovation includes repainting the Needle. People have gotten used to the neutral white of the current edition. Some would like to go back to the original colors of the ‘60s: The Needle had an off-white, almost cream-colored base and a tangerine top with red highlights. The colors were called Astronaut White (tower), Galaxy Gold (top) Re-entry Red (highlights) and Orbital Olive (core). The top has been painted or decorated for special occasions and promotions from time to time, and the Galaxy Gold orange top has reappeared for the 40th and 50th anniversaries.

Some aspects of the renovation have their roots in the past, but the Space Needle is not stuck there.