These Organic Farmers Are Changing the Future of Washington’s Cranberry 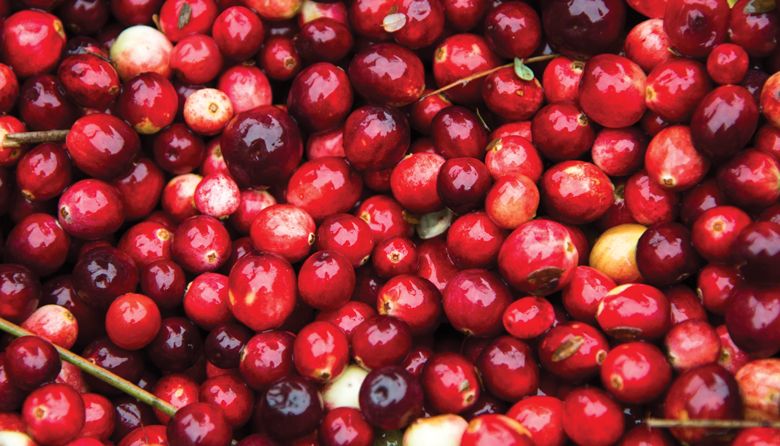 Aggressively tart to the point of mouth puckering, cranberries have never even made the list for Ms. Congeniality when it comes to fruity fame. But these nutritional super berries, long relegated to can-shaped jelly on the Thanksgiving table, have been transformed, first by megacorporation Ocean Spray, which created popular beverages and dried versions of the berry, and, more recently, by small, local organic farms like Starvation Alley in Washington’s Pacific County. Bogged Down: Family patriarch John Oakes (Jared Oakes’ father) drives the “beater” tractor, which separates the berries from the vines after flooding. Photo by Navid Baraty

There on a 10-acre bog, owners Jared Oakes, 37, and Jessika Tantisook, 32—and their young daughter, Willa—are writing the book on organic cranberry farming. Their cold-pressed juice (just one of their products, alongside more traditional options, such as sweetened, dried cranberries and cranberry sauce) is nothing like the tart, bitter “cocktail” most associate with cranberries. And local mixologists are going crazy for it.

Oakes grew up in Long Beach, where his parents ran a commercial fishing boat. An entrepreneur from the start, he owned and was operating a local hotel and restaurant when he met Tantisook in 2008. She was working on an organic farm in the area. After becoming a couple, they moved briefly to Ohio, where Tantisook managed a community garden, before returning to Pacific County in 2010 when Oakes’ parents asked them to manage the family’s hobby cranberry farm. They agreed on one condition: They wanted to farm it organically. Helping Hands: Most cranberry bogs need three to four helpers at harvest, but Starvation Alley makes it a community event, with upwards of 40 volunteers. Here, harvesters corral the berries using plastic and wooden booms; Jessika Tantisook estimates there are a couple hundred pounds of berries held in the green boom above. Photos by Navid Baraty.

Of the 41,500 acres of cranberries harvested nationally, including 1,800 acres in Washington state (as of 2012), only about 300 acres are farmed organically—because, as it turns out, cranberries are hard to grow without pesticides and herbicides. Cranberry vines grow in dense, tangled mats that don’t lend themselves to nice, tidy rows. Weeds are a challenge to control, and pests like the blackheaded fireworm can destroy a crop. Pests are one reason organic farmers flood cranberry fields, which drowns the insects.

“We got excited because all of the experts said it would be impossible to grow cranberries organically,” says Oakes.

That’s right, the expectation of certain failure sweetened the deal for these determined farmers, who have a deep interest in food systems. The couple decided to try cranberry farming for two or three years, and then reassess. But they became so determined to crack the organic cranberry farm code that the reassessment never happened. The first five years were full of frustration and struggle, says Oakes, mainly due to the lack of resources and general expertise in the field of organic cranberry farming. Rake It In: Within the boom, berries are raked with a metal paddle toward an elevator. Berries ride up the elevator Jared Oakes’ sister, Tiffany Turner, rakes berries from the elevator into a bin for transport — wet harvested berries like these have a short shelf life and must be used immediately. Jared Oakes and Jessika Tantisook on the farm. Harvesting is a community event, and farm owners throw an annual Bog Social in appreciation of their volunteer team.

Along the way, in an effort to have their cranberries and products sold in bigger markets and bring in more money, Oakes and Tantisook started a second business: paying local farmers to convert their conventional cranberry farms to organic. According to Oakes, Ocean Spray pays farmers about 40 cents per pound; Starvation Alley pays transitional (prior to organic certification) and organic farmers 75 cents per pound.

One of Starvation Alley’s best customers is Oakes’ older sister Tiffany, who owns Adrift Hotel in nearby Long Beach with her husband, Brady Turner. Their new distillery, Adrift Distillers, is making a Starvation Alley liqueur, which Oakes says is delicious. Although Oakes and Tantisook feel like they’re fighting an uphill battle much of the time, it pales in comparison to their sense of accomplishment when a bog makes the transition to organic. The challenge has connected them to the community in a big way. The naysayers have quieted down, and many have joined the cause.

“The longer you get to be of the land, the more you become connected to it and start to care about it,” says Oakes, who likes thinking about things through the lens of farming. Spring is among his favorite times of the year, when the buds are breaking, flowers are popping, and the bees show up. Grow, harvest, repeat. Most wet-harvested berries are frozen or pressed for juice, which local mixologists use in creative cocktails

Seeing Red
Want to see a harvest in action?
Check out this annual cranberry fest While others are picking pumpkins this time of year, cranberry farmers are readying the bogs. On October 13–14, Grayland (a two-hour drive north of Starvation Alley on the coast) welcomes cranberry enthusiasts to the 25th annual Cranberry Harvest Festival, a family-friendly affair that includes tours of cranberry bogs, a bog jog, vendors, firelight parade and more at the Grayland Community Hall (2071 Cranberry Road; westportgrayland-chamber.org). And though it’s fun to see this tart berry transformed in the annual cranberry cook-off, the real draw is getting to witness the harvest.