Tumultuous Capitol Hill Neighborhood is a Beacon of Change

Walking through one of Seattle's oldest 'hoods, Steve Scher discovers that while the future looms in every direction, each step takes you through the past. The four-story brick building on Roy Street, between Broadway E and 10th Avenue on Seattle’s Capitol Hill, is a relatively recent addition, filling an empty lot that for many years lent the street a gap-toothed incompleteness. Its red and white bricks are arranged in a pattern usually found in modern malls. On the first floor, a big, warm coffee shop looks like a neighborhood joint—just the impression sought by its corporate owners.

Across Broadway stands the nationally recognized Loveless Building, built by Arthur Loveless as working homes for artists in 1931, just as the Rainier Chapter of the Daughters of the American Revolution (DAR) began constructing its Mount Vernon-inspired headquarters next door and the suffragist-led Woman’s Century Club was moving into its brick clubhouse across the street. Add 1921 Kerry Hall, built to house Nellie Cornish’s school—just across from the DAR and kitty-corner to The Woman’s Century Club—and it’s clear these somewhat askew intersections represent an early center for art and insurgent politics in the city.

To the north, the tree-lined streets that lie within the city-designated Harvard-Belmont Landmark District have a staid and stately quality, with turn-of-the-century homes that once belonged to wealthy lumber barons and railroad magnates. But in the large rectangle along the steep sides of Capitol Hill, bounded by Roy south to Pine and Broadway west to the freeway, you can still see how the city grew. Here you can trace the evolution of economic necessity and architectural desire in the masonry above the doorways and the terra-cotta around the windows.

A walk along the streets that parallel the ridgeline—Summit, Boylston and Bellevue—reveals a neighborhood that has always been in transition, or perhaps more specifically, disruption. In the 1920s, a construction boom hit. Developers rushed in to build taller buildings with studios and one- and two-bedroom apartments to serve the growing population. Sound familiar?

Wander a few blocks south along Bellevue to turn right onto Republican and walk to where the street ends. Take a seat on a step at the top of a grand staircase that once connected Capitol Hill to the Cascade neighborhood. Now it abruptly ends at Melrose Avenue E above the freeway. Think the city is in construction chaos now? Contemplate that river of cars on Interstate 5 that roar below. Back in the 1950s, a whole neighborhood was bulldozed to accommodate growth.

What’s left standing is a jumble of new and old, rich and poor. The shops and bars along this part of Capitol Hill have a gritty but neighborly feel. Halfway houses dot the neighborhood. Returning prisoners and recovering addicts linger in the doorways of turn-of-the-century apartment buildings and nod to the high-tech workers turning into their new multimillion-dollar glass-and-steel structures next door. This is a neighborhood where old bodegas become hip bistros and where more dogs walk the street than children.

It’s growing denser. Bigger apartment buildings continue to replace smaller ones. The views are peekaboo, glanced between the rising buildings. Yet people find little ways to keep it to a human scale. Walk back up on Bellevue, and south three-quarters of a block. In front of the apartment building at 407 Bellevue, someone has crafted an Alice in Wonderland landscape, populated with rubber duckies, miniature plastic elephants and a teapot.

If you turn left and walk a block to Summit, you can marvel at the different architectural eras that tumble into each other on that street. About half a mile farther, at E Howell where it crosses Summit, look at the Summit mural, standing above a little garden, a nice respite in an area that’s only served by three small pocket parks. The triptych depicts the inside of one apartment in the Emerald Arms building behind it and then shifts the view to the Olympics from its windows. Franz Rheinhardt Wise painted it in 2009.

“People know about it. They say, ‘Oh, you are the one who did that.’ It connects me to Seattle,” says Wise.

It gets tagged, so Wise repaints it periodically. “I would never do that to anyone else,” he says of the tagging. “There is a certain code of ethics, but that doesn’t seem to be evident here.”

Maybe the graffiti connects the ethically challenged tagger to the neighborhood, too. Whatever works. Tag a sign, put out a rubber duck, get to know the barista at the local shop—anything to keep some sense of yourself amidst the tumult of this neighborhood.

There is tumult galore as you continue south on Summit to Pine. Modern concrete, glass and steel buildings along the street ousted many familiar bars and restaurants. Now there are new businesses in new buildings, too new for some of the folks who remember a rawer neighborhood. This corridor was once “auto row,” the showplace of the car century. But the old showrooms are being torn down, rebuilt into apartments, restaurants and shops. People in the neighborhood are choosing not to own a car. Parking is time consuming and expensive. Instead, as they have for a hundred years, the streets hum with walkers on their way to work, to bars, to barbers and to coffee shops, the fuel of the modern worker’s neighborhood. 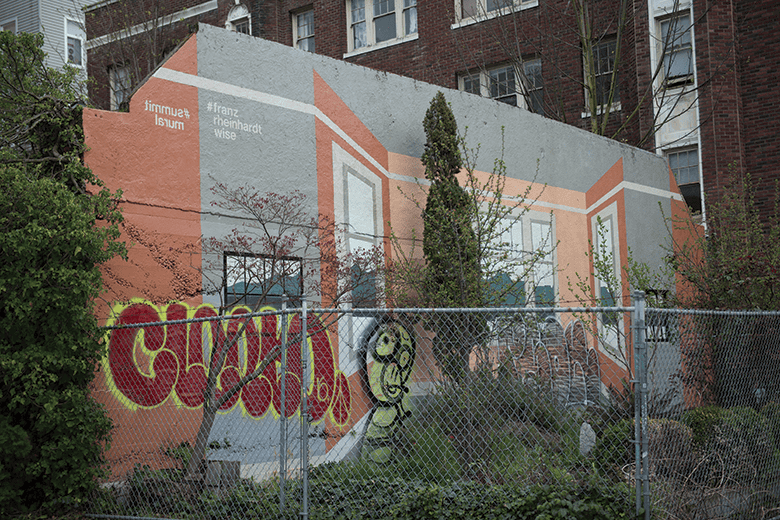 Photo by Ben Lindbloom. The Summit mural depicts an apartment in the building behind it.

Altered States
Some buildings are new, some are old and repurposed, but change—as always—is the neighborhood constant.

807 E Roy St.
In 1925, The Woman’s Century Club built a three-story brick building. The club was organized by many of the city’s powerful and important women, including the city’s first (and only) female mayor, Bertha Knight Landes. Sold in 1968, the building became the renowned Harvard Exit Theatre. Sold again in 2014, the building’s newest owners are considering a restaurant and office complex. The club is no longer able to use the building, so most of the paintings, books and other items the club owned were sold. However, the building’s exterior has been protected. When the renovated building reopens, the historic Woman’s Century Club signs, engraved in stone, will still be in place above the doorways. And The Woman’s Century Club continues its civic works some blocks away, at Dearborn House.

601 Bellevue Ave. E
This 1910 two-story, wood-frame building housed a neighborhood grocery for many years, with an apartment above. The building fell on hard times and was boarded up. A neighborhood bistro, Harry’s Fine Foods (harrysfinefoods.com), now occupies the space. The owners created replicas of the old grocery store’s signs, “Harry’s Fine Foods” and “Frozen Meats,” as the originals had been stolen.

1615 Belmont Ave.
To get a sense of the rapid changes on lower Capitol Hill, stand at the corner of Pine and Belmont and gaze at the Terravita building, with its luxury apartments, gym, game room with Xbox 360, and club room with two 60-inch televisions. Parking is $200 a month. Look up and down Pine Street to see its siblings. There are more to come. One hundred years from now, these steel-and-glass designs could well define the aesthetics of this booming era, just as the brick and terra-cotta apartments defined the last.