Above ground, the journey of Bertha’s dig under downtown has been one of the most talked about news stories of recent years. As Bertha begins to emerge on the other side, we go underground for an exclusive look For the past four years, from Sodo to South Lake Union, a 9,270-foot underground dig has unfolded to bring Seattle the world’s largest tunnel, part of the $3.1 billion replacement of the Alaskan Way Viaduct. The tunnel ($2 billion of that), while beset by not-inconsiderable setbacks, is also a project marked by engineering marvels on a Brobdingnagian scale, and it promises to revolutionize the landscape of our city by ending the reign of the Alaskan Way Viaduct and dramatically opening up the waterfront.

The tunnel boring—meticulously recorded since the beginning in photos taken by Washington State Department of Transportation photographer Greg Phipps (whose photos appear here)—is scheduled to conclude late this spring, thanks to the labor of thousands of men and women who have profoundly reshaped a subterranean landscape of shifting soil, rocks and water underneath some of Seattle’s busiest streets and office buildings. Their efforts leave a gigantic concrete tube enclosing a new path through town for Highway 99. Image by Andrew Richardson
For every inch that Bertha moves forward, 12 tons of earth and muck are removed via a conveyor belt. By the end of the dig, 1.5 million cubic yards of soil will have been excavated from underground Seattle. As the tunnel grows longer, the belt is extended and deposits the soil onto a barge waiting at Seattle’s Terminal 46. One barge can hold a quantity of dirt that’s the equivalent of 26 feet of tunnel dug out from underneath Seattle. When a barge is full, it takes off for Port Ludlow, where the excavated soil is helping to reclaim a quarry near Port Ludlow.

>> Watch how buildings and the ground were monitored while tunneling: Watching Bertha Closely: Monitoring Systems on the SR 99 Tunnel Project

The tunnel is 52 feet wide, large enough to support a double-deck roadway plus exit and maintenance corridors. The scope of the project is nearly unimaginable: More than 6,600 tons of rebar and 90,000 cubic yards of concrete alone have gone into the 1.67-mile route.

The star of the show has been the massive drill nicknamed Bertha, which boasts a 57-foot, 6-inch-diameter cutter head with more than 700 cutting tools, some weighing as much as 600 pounds. Bertha, named after Seattle’s first and only female mayor, Bertha Knight Landes, began the journey in July 2013. The custom-built tunneling machine stretches almost 400 feet with the cutter head in front and hundreds of feet of supporting gear trailing behind. It weighs more than 6,000 tons, and has crept forward an average of three inches a minute. She’s the world largest tunneling machine, made by Hitachi Zosen in Japan at a cost of $80 million for Seattle Tunnel Partners, the tunnel project contractors. Image by Greg Phipps
A welder works on one of Bertha’s cutting teeth, on the front of the machine, during repairs in July 2015.

The sophisticated tunneling machine pushes forward to dig the tunnel, then stops and builds the tunnel’s outer wall one ring at a time. Each tunnel ring is made up of 10 segments averaging 18 tons each which are lifted and placed by a giant suction vacuum that plays different cheerful tunes while in motion alerting crews working nearby. Workers make sure segments are level with a hand tool and then secure them with a giant bolt and drill. In short, it’s the dream come true of anyone who ever tinkered around with a motorized erector set.

After Bertha breaks through into daylight near the Space Needle sometime in April and is removed in pieces, the more pragmatic work will begin—roadway installation, lighting and signage. The first cars and trucks should roll through the tunnel by early 2019. 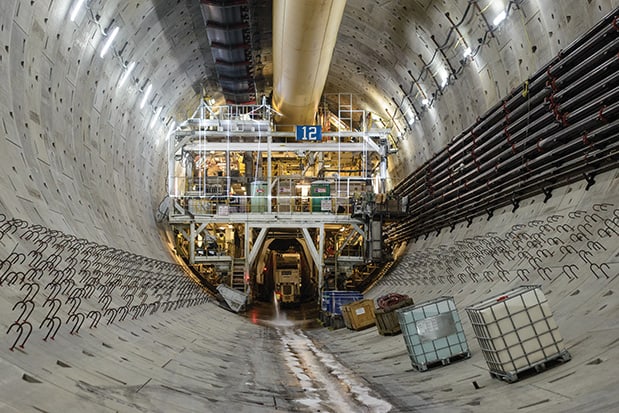 Image by Greg Phipps
A view from behind Bertha’s trailing gear, decked out with a 12th man flag hung there by workers. Crews spend on average 10 hours per shift underground in the tunnel; portable toilets are strategically located for when nature calls. Drilled inside the curved outer wall on both sides, the metal rebar resembling hooks will help support the roadway to come. The caged bins in the foreground hold tools and items workers need to keep the tunnel tidy.

Some Seattleites might think of Bertha primarily in connection with the project’s delays. The opening date is coming years after its initial projected opening in December 2015, primarily due to a 2013 event when the machine overheated and its seals were compromised requiring extensive above-ground repairs. The cause of the damage is in dispute and is currently a matter of litigation. When repairs were made, drilling resumed in December 2015, with tunnel reaching its halfway point in September 2016. 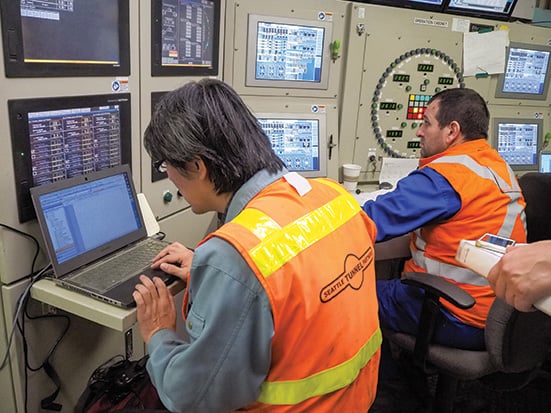 Image by Greg Phipps
This is the control room from which Bertha is steered. Thousands of points of data help keep the giant drill on track, under the guidance of the machine’s operators. Any type of construction work performed underground is considered mining, and when Bertha is digging, the operators—a mining engineer, a mining quality-control specialist and a mining superintendent—are all in the control room.

>> Go behind the scenes with a tunnel boring machine operator in this video: Underneath Seattle: Steering Bertha 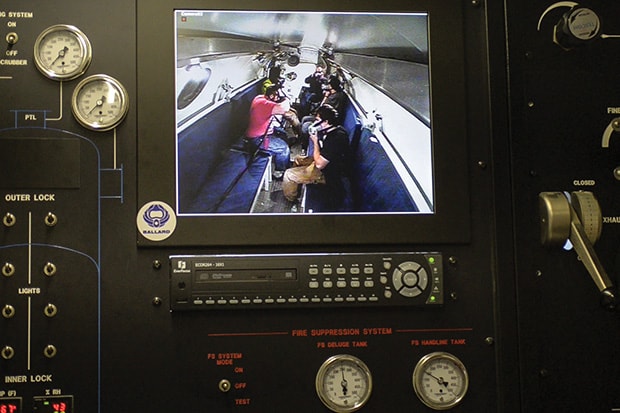 Image by Greg Phipps
In this picture, crews demonstrate how they would use a hyperbaric facility housed on the tunnel work site. Occasionally, maintenance on Bertha requires crews to work in hyperbaric conditions similar to those that would be found in an underwater dive (see profile of Craig McNeil below). The facility is designed to keep crews at hyperbaric pressure for weeks, if needed. This facility has never had to be used. Photograph by Greg Phipps
Before starting a shift inside the tunnel, all workers stop by the “brass shack” to pick up a metal tag, so all hands can be accounted for at any given time as they enter and leave the tunnel. Image by Greg Phipps
In 2013, Bertha came to a halt for repairs. To access the drill, a 120-foot access pit was dug. The front end of the massive machine, which is seen here, was lifted to the surface and repaired. Afterward, the giant pit was refilled. 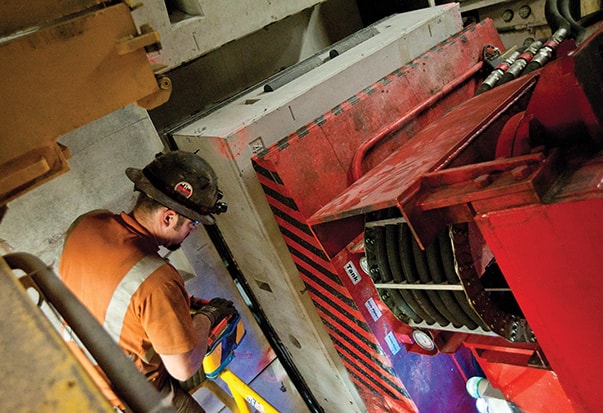 Image by Greg Phipps
Working in tight quarters, one of Bertha’s ring builders uses a remote control to install one of the 10 curved concrete segments that make up a tunnel ring. Ring by ring, the 10 segments create the outer wall of the bored tunnel. There will be 1,426 rings built by Bertha’s crews inside the bored portion of the State Route 99 tunnel. Each segment weighs as much as 36,000 pounds, lifted into place with extraordinary gentleness by a giant suction vacuum and manually bolted into place. During segment installation, as an extra safety precaution, Bertha plays tunes to alert workers that a lift is in progress. Different parts of the machine play different songs so that crews associate a song with each type of moving part.

>> Take a 360 degree look at inside the belly of Bertha, as the segment erector puts cement liners in place: Underneath Seattle: A 360 Video Tour of the SR 99 Tunnel Image by Greg Phipps
This photo, taken in February 2017, shows crews installing supporting steel in rebar cages underneath First Avenue and Virginia Street. Concrete will be poured over the steel and eventually become a corbel, or ledge, that supports the walls holding the upper deck and the lower deck (not yet installed).

>> Watch how a tunnel ring is built in less than an hour: Underneath Seattle: Building a Tunnel Ring