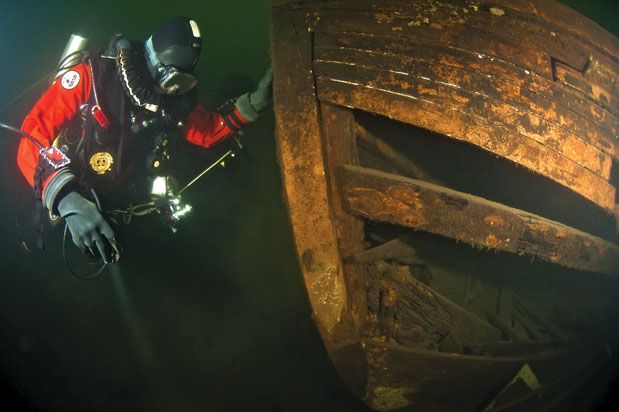 The beam of a scuba diver’s flashlight cuts through murky water, illuminating sediment that resembles an ash storm at night, until the glow catches on something white. It’s the hull of a World War II minesweeper, coated in algae and mud, completely intact, with rooms and corridors, even a mess, you could still walk around in—if it wasn’t completely submerged in 40 feet of water on the south end of Lake Union. Built in 1941, the Gypsy Queen (formerly YMS 105) was a workhorse, clearing paths for military convoys around the globe. Decommissioned after the war, it was sold multiple times (finally to owners who planned to convert it into a fish-processing boat) before it sank mysteriously one night at its berth on Lake Union. Until recently, the Gypsy Queen and countless sloops, barges, tugboats, tenders, pleasure craft and other vessels rested—forgotten—on the lake floor.

To the commuters zipping by, construction workers rebuilding the Mercer interchange, techies and researchers taking in the view, even scullers and kayakers plying V’s into the water, Lake Union is a large and beautiful expanse. Most of us give little thought to what lies below the surface. But during the past four years, under the auspices of a Center for Wooden Boats’ underwater archaeology project, expert divers, armed with powerful flashlights, underwater cameras and battery packs, have shed light on Lake Union’s submerged history.

While the waters of Puget Sound and Lake Washington have long been havens for wreck lovers, Lake Union has not. With its poor visibility, shallow depth (about 40 feet at the deepest), constant ship, boat and seaplane traffic, and maritime industry along its shores, these waters are treacherous and prohibited to divers (except by special permission), which has helped keep its secrets. That air of mystery piqued the interest of diver Dan Warter of the Maritime Documentation Society. who volunteers with the project. “I knew that no one had ever seen some of these before,” he says of the wrecks.

You might be surprised by how much is down there—in some cases, boats stacked on top of boats.

Even at noon on a clear day, the sunlight doesn’t permeate the muddy lake. “Diving in Lake Union is so different than anything else we’ve done,” Warter explains. “It’s really dirty, really murky. It’s pitch black; at times you can’t tell the difference between the water column and the mud. But when you see a wreck, your mind clicks into gear.”

Take the J.E. Boyden, considered one of the most important wrecks identified so far. A wooden tug built in 1888 in North Seattle, the J.E. Boyden had been used to transport coal and later, logs. It was also part of a fleet of steam-powered tugs that pulled tall ships through the Strait of Juan de Fuca (importing and exporting critical goods for Seattle’s economy). In 1896, it was called in to assist after the enormous British square rigger Kilbrannan, attempting the strait on its own, beached near Point Wilson. For months, the crew of the J.E. Boyden worked with other tugs to free the landlocked ship, but without success. The Boyden’s years of dutiful service ended in the 1930s, when it was stripped, abandoned and sunk in the middle of Lake Union, where it sits today.

“I’ve lived on the lake for 55 years, and I always heard stories about boats sinking,” often over drinks, says Dick Wagner, the Center for Wooden Boats’ founding director. He decided to put the legends to the test, and says, “Those drunken friends of mine knew what they were talking about.”

For the underwater archeology project, Wagner has brought together an all-volunteer team, which includes Ross Laboratories in Eastlake, volunteer divers and local agencies, such as the city’s Harbor Patrol. The Center for Wooden Boats pinpointed more than 20 target sites based on Ross Laboratories’ scans of the lake bottom. Divers make a physical inspection of a location, and once they discover a wreck, take photos and video, measure the dimensions and look for a name or numbers. These can be hard to find since they’ve often been burned or scratched away by owners hoping to cover their tracks. If the divers are lucky enough to find identifying marks, they research the history and the people behind the boat in order to bring its story to life.

Thus far, about 40 wrecks have been discovered and recorded, and 25 have been identified. (The center will not release the exact coordinates of the wrecks because it doesn’t want to encourage illegal diving.) The most recent noteworthy discovery was the Gypsy Trader, which was discovered last September. Built in 1930, the 60-foot trawler’s last owners planned to use it to support the Gypsy Queen fish-processing boat (mentioned earlier) to help finance their retirement in Alaska. Unfortunately, the Trader and the Queen sank in the 1960s. A third boat, the Gypsy Too, burned in a fire around the same time.

Those less well acquainted with Lake Union’s history might be surprised by how much is down there—in some cases, boats stacked on top of boats. “If they drained the lake, it would look like a garbage dump,” says Chris Borgen, who has been a member of the archaeology project’s dive team from the start. And while people have stopped launching all variety of household and industrial waste into the water, the sinking of old, unwanted boats (along with their fuel, asbestos and other maritime toxins) continues to be a problem.

Borgen sees plenty of neglected boats tethered to docks when he heads out to dive. “We joke, ‘There’s the next one we’re going to dive,’” he says. And so, even as we celebrate the wrecks of the past, we struggle over the derelict vessels of the present.

The effort to record these old wrecks is not simply a matter for scuba heads or boat geeks. Lake Union is the heart of Seattle’s maritime origins; filling in the story of its transformation from a pristine natural lake to a center for industry (including sawmills, brick making and boatbuilding) to a recreation hub through photos and film is of tremendous value.

“If you can show, it’s so different than telling,” says Lorraine McConaghy, public historian at the Museum of History & Industry (MOHAI). Looking at the lake’s reflection through a window at MOHAI’s new home next door to the Center for Wooden Boats, McConaghy says that even the images of the silty, muddy water are important. “To be able to see what’s beneath is giving a gift to the community.”