The Vanishing Dream of Owning a Single-Family Home in Seattle

Looking for a newly built, ‘traditional’ single-family home in the Seattle market? Good luck with that. 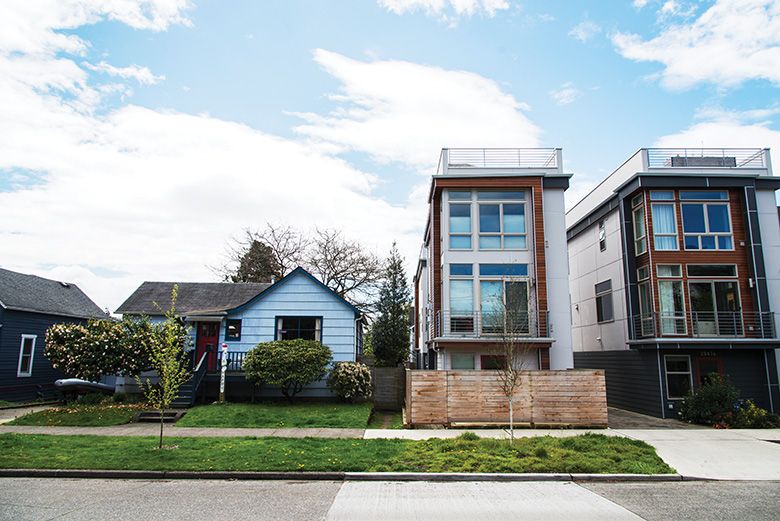 With land to build new housing becoming scarcer in the Puget Sound region, competition among builders is getting tougher.

Ultimately, the victim may be the American dream of owning a single-family home. For many in the Northwest, the likelihood of achieving that dream fades as scarce land, rising labor costs and the arrival of hundreds of thousands of newcomers drive housing prices to unprecedented levels.

In March, the median value of a single-family home in Seattle was $700,000, up from $357,000 five years ago. Prices could continue to soar as home builders struggle to find more land to add to the supply of houses in an area that records about 6,000 home sales a year but where only 3,900 new lots are added annually.

Krivanec estimates Quadrant has just over a three-year supply of finished and in-process lots on which to build houses. Charlie Conner, owner and president of Bellevue-based Conner Homes, says he has “virtually no inventory” of finished homes because most of the houses Conner builds are sold before they are completed. As for land, Conner says, “Most of us are working on just-in-time inventory.”

The squeeze on buildable lots pushes up land prices, which, along with rising construction costs, put home ownership out of reach for many young families who covet a house and a yard for their children and pets. Unable to buy houses, a growing proportion of these people remain renters and cannot “build savings as the previous generations did through home ownership,” says Peter Orser, chairman of the advisory board of the Runstad Center for Real Estate Studies at the University of Washington (and a former president of Quadrant Homes). For other reasons few condos are being built, so about 55 percent of all Seattle residents remain renters.

How did it happen?

It’s the law of supply and demand at its most draconian. Start with Washington’s Growth Management Act, which limits the areas where builders can construct new homes. Then add a robust economy that has brought as many as 415,000 new residents to the Puget Sound area since 2012, according to an analysis of drivers’ license data by Bothell-based Metrostudy. (Josh Brown, executive director of the Puget Sound Regional Council, says population growth during the period is closer to 294,000, but you get the picture.)

Metrostudy Regional Director Todd Britsch says the supply of buildable lots in King and Snohomish counties is historically low and he expects it will only go lower. Land available to build on has shrunk by 16,870 lots since 2009, says Britsch, who notes that King County has a 16-month supply of buildable lots while Snohomish County is at 10 months.

With buildable land harder to come by, developers find they can make more money building apartments, multifamily homes and townhouses. Last year in the Seattle-Tacoma-Bellevue metropolitan area, about 9,000 permits for single-family homes were issued, close to one-third of the total of 25,500. It’s substantially less than in 2007, when permits for 12,400 single-family houses were issued — nearly half of the total of 25,460 permits granted.

More and more, these new houses constitute infill construction on vacant lots and other undeveloped parcels, including many that were built after teardown of an existing home. In the year ended March 2017, says Britsch, there were about 8,000 sales of new single-family houses in the four-county Puget Sound region. Roughly a quarter were infill construction.

Also contributing to the tight housing market is an invasion of institutional investors that have purchased some 44,000 homes in the region in recent years, effectively taking those homes off the market, notes Britsch. Earlier this year, Realtor.com ranked Seattle the tightest housing market in the country, with just one of every 263 houses for sale. That represents a 13.4 percent decrease in the supply of homes for sale compared to last year.

With the imbalance between supply and demand, the median selling price for a home in King County was $560,000 earlier this year, up 8.7 percent from a year ago.

Couples interested in houses with the traditional backyard have to go farther and farther afield from where they work. And even then, there are fewer sites on the scale needed for the kind of large master-planned communities that once provided much of the single-family housing in the region.

The projects that are in the works tend to be farther away from job centers. For instance, Tehaleh, which will have 9,200 homes when completed, is south of Bonney Lake, 40 miles from Seattle — more than 90 minutes by car or train. In Black Diamond, 35 miles from Seattle, The Villages propose about 3,600 single-family units and Lawson Hills about 930. Photograph by Navid Baraty. Tehaleh, a 9,200-home community near Bonney Lake, is one of the last master-planned developments in the region. Depending on traffic and mode of transport, a commute to Seattle, 40 miles away, can take up to an hour and a half.

As big as these projects are, they will do little to satisfy the region’s hunger for new housing. Historically, a strong master-planned community will likely sell only about 250 homes a year, Orser says.

One possible solution is more effective use of the land that is available. According to the 2014 buildable lands report, King County has “an abundance of land capacity for both residential and employment growth through 2031.” But finding developable land is a challenge, thanks to the Puget Sound region’s hilly, soggy terrain and restrictions on development imposed by the Growth Management Act, which is designed to prevent sprawl and to preserve the region’s natural beauty.

Still, the Growth Management Act also requires cities to ensure that available housing keeps pace with job growth. “Better use of geo-information technology could be used to give us a more accurate assessment of buildable lots,” Orser argues.

However, where land is available, it is being used more often to build communities of multifamily homes than detached single-family homes. The Puget Sound Regional Council encourages that trend by granting scarce public transit dollars to localities that promote such density. Areas of high density can be more economically connected by public transit than single-family communities, which tend to depend more heavily on automobiles.

Another option developers have is to scoop up the “ugly ducklings, odd-size pieces, secondary locations or teardowns,” says Holly Gardner, president of Full Scale, a new consulting division of the Seattle-based Schuster Group. Full Scale helps clients with real estate development projects in the city.

While there is land near Woodinville and Redmond, it can be challenging to develop because the parcels often aren’t connected to city sewer systems and rely instead on septic tanks. Putting in new sewage systems requires new permitting and can require a major investment.

One alternative to suburbia are the infill developments in urban areas zoned for multifamily developments. There, existing homes are torn down and replaced by townhouses, duplexes and row houses. Many are tall, narrow boxes that have no yards, but intimate views of the box next door. They often compensate for the lack of space with such amenities as gourmet kitchens and spa-style bathrooms.

“We’re already starting to see the influence in the exurban neighborhoods where there is a lot of infill development, a lot of townhomes,” says Matthew Gardner, chief economist for Windermere Real Estate in Seattle. Those homes, which can cost upward of $700,000 for a townhouse, are aimed at wealthier millennials who want a new house but don’t want to travel too far for it.

“They want to buy but they don’t want to buy out in the suburbs,” Gardner explains. “They want one foot in the city close enough to get to work downtown.”

This is the market Toll Brothers is targeting with developments in Bellevue, Kirkland, Redmond and Seattle on properties near good school districts and employment centers. In Seattle’s Queen Anne neighborhood, for example, the company is building 57 luxury townhomes on 2.5 acres it acquired from the Seattle Children’s Home. The project was reduced from 66 units after opposition from the surrounding community, a common occurrence when large in-city developments are proposed in residential areas.

Such large opportunities are rare. The supply of buildable lots is “very, very constrained,” says Toll Brothers Division President Kelley Moldstad. As Toll Brothers’ lots are developed and sold, Moldstad says the home builder will be looking for lots in the next ring out from Seattle — Snoqualmie, North Bend, Renton and Bothell.

“The more and more dense we get, the farther and farther we may have to drive to get that single-family house,” Moldstad says.