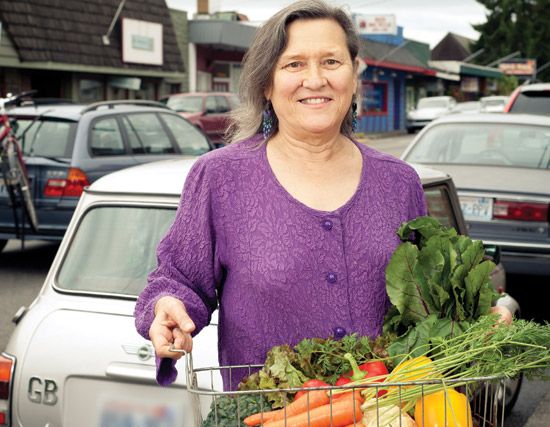 MOST PEOPLE AGREE THAT dieting is easier when you do it with a buddy. If you live on Vashon Island, diet buddies are everywhere. That’s because a new diet plan—called the “TQI Diet” (“to quiet inflammation”)—has become so popular on the island that an estimated 15 percent of the adults there have signed up for diet classes. Several restaurants offer TQI Diet–based dishes on their menus, and grocery stores stock special shelves with TQI Diet–friendly items.

The diet—created by Vashon resident Kathy Abascal and based on the idea that certain foods cause inflammation in the body—has been gaining fame and followers because, apparently, it really works. “It’s pretty much saved my life,” says Rex Morris, a 64-year-old Vashon Islander. “And it’s unbelievably easy to stay on it. I never feel deprived, I never feel hungry. If I want something, I have it, but I balance it out. The longer I’m on it, the better I feel.”

Until last year, Morris struggled with numerous health challenges: obesity, type 2 diabetes, high cholesterol and a serious lung disease. He couldn’t walk more than five minutes without feeling winded. Then he discovered the TQI Diet. In the year since he’s adopted the plan, he’s slimmed down 70 pounds from his original 300, kicked his insulin, and seen his cholesterol plunge and his lung capacity expand. He now routinely works outside four hours at a stretch and has energy to burn. His previously frozen shoulders now move much more easily.

The diet is based on the principle that certain groups of food can cause inflammation within the body, causing or worsening everything from arthritis to migraines, while other foods, mostly of the whole, unadulterated variety, can reduce or halt that inflammation, lessening all kinds of aches, pains and maladies, and boosting energy.

The most important thing to understand, Morris says, is that the plan isn’t a diet per se; something you endure for a while until you’ve lost weight. Rather, it’s a way of life that embraces whole foods eaten in abundance, with a heavy emphasis on vegetables and fruits.

Plenty of other diets are based on this premise, but few also make a claim to helping with so many medical issues. Proponents say the diet certainly helps adherents lose weight or maintain healthy weights, but it also helps them ease all kinds of joint pains and problems by eating foods rich in anti-inflammatory properties.

Morris’ wife, who has lived with type 1 diabetes since childhood, says she’s been able to cut her insulin by a third since starting the diet.

The TQI Diet is the brainchild of Kathy Abascal, a former lawyer turned herbalist who also holds a degree in neurobiology. She says the crux of the plan is quite simple: Make sure meals are roughly divided into two-thirds fruits and vegetables and one-third protein and carbohydrates.

Pure, unprocessed foods are emphasized, while refined sugar and grains are out. Artificial sweeteners, partially hydrogenated oils, preservatives and additives likewise get the boot. Calories or portions aren’t counted. Healthy fats? Bring them on, in the form of avocados, nuts and nut butters. Eggs are OK, too, as is alcohol, in moderation, after the first phase of the diet.

In many respects, it’s similar to the Mediterranean diet and lifestyle, which nutrition experts often cite as one of the healthiest ways to eat and live.

It’s naturally safe for children and the elderly, Abascal says, though anyone with health concerns should always first check with their physician.

Abascal does not subscribe to the notion that there are no “bad” foods; there certainly are bad foods, and everyone knows it, she says.

French fries, pastries, refined and processed foods, candy and anything with high fructose corn syrup should be strictly avoided, according to Abascal, who says that such foods encourage inflammation within the body, making joints hurt and encouraging diseases such as Alzheimer’s.

That idea has never been proven, but a number of prominent voices in the health world do recommend just such a diet, including celebrity prevention guru Dr. Andrew Weil. Athletes, too, are adopting anti-inflammation diets; the chef for the 2011 French Tour de France cycling team declared recently in Bon Appétit magazine that he tries to follow the principle.

Abascal crafted her version of an anti-inflammatory diet in 2007 after she began piling up health complaints and feeling the effects of aging. Her ankles had stiffened up, making her hobble first thing in the morning; she had a frozen shoulder, had thrown out her back, and she simply couldn’t find a comfortable position in which to sleep.

“I went to my health clinic for pain relief, and I finally had to confront how much I weighed,” she says. “My blood pressure was in the hypertensive range. I left the health clinic feeling down, but motivated to make a change.” In the past, she’d tried slimming down through programs like Weight Watchers, but found counting calories or points just didn’t work for her.

“I absolutely focused on quieting joint inflammation,” she says, and revamped her eating habits. The result? “My ankle pain went away, and I actually began to lose weight, even though I was eating a lot of foods like avocados. I did it for six months. By then, I’d lost 30 pounds, 8 inches off my waist, and my frozen shoulder was gone. My blood pressure was 120/70. I got wildly excited and began teaching classes at the health food store on the island. I didn’t advertise—it spread by word of mouth” as people began to both feel better and lose weight in a synergistic cycle.

Abascal now also teaches at the Highline Medical Center and at a Whole Foods store in Seattle, as well as online. She has a website devoted to the topic (toquietinflammation.com) and a book is in the works.

Abascal estimates that 1,500 people on Vashon have taken her class on the diet, and she says Morris’ results aren’t unique. “Some of the results are just simply amazing,” Abascal says. “It’s what keeps me excited and going, how quickly people can turn things around in their lives.”

The diet’s success isn’t limited to the island. Fife resident Marcia Damoiseaux and her husband, Lee—both in their 60s—have both lost weight and improved their cholesterol and other markers of good health on the plan. “We have more energy and reduced aches and pains. That’s huge,” she says. “Both of us have cut triglycerides in half.”

Lest you think it’s all about apples and sprouts, take a look at the menu of one Vashon restaurant. Express Cuisine on Vashon Highway offers an entire page of TQI Diet-approved cuisine, with seasonally changing dishes such as roasted duck breast with cherry and port demi-glace; Thai Lime Ricky prawn salad; and crab cakes.

Jim Riggsbee, a partner in the restaurant, says the menu is quite popular. “There was such demand here, with so many people getting involved in the diet and having such success with it. They wanted to extend it to eating in restaurants,” Riggsbee says. “What made it real easy for us is that [the food] is not that out of the norm.”

Abascal says that’s key. “Most people find it very easy” to follow the TQI Diet, she says. “I just love teaching this.”

The TQI Diet at a Glance

• Modest amounts of carbs, preferably of the whole grain variety

• Healthy fats, such as nuts, nut butters and avocados

• Foods that certain individuals may react to, such as those containing gluten (on a case-by-case basis)

• Alcohol, for the first phase of the diet