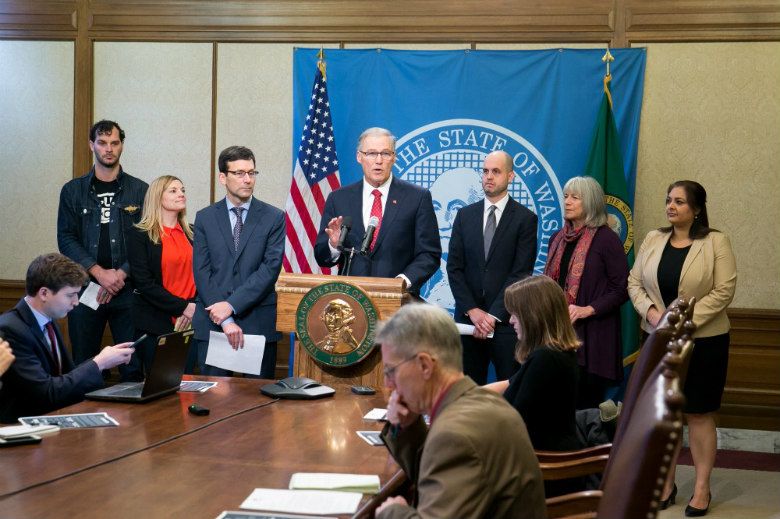 Washington Governor Jay Inslee, Attorney General Bob Ferguson and other state legislators and business leaders announced Wednesday that Washington would seek to “preserve an open internet” on the state level if the Federal Communications Commission votes to undo the nation’s net neutrality rules.

This would make Washington state the first in the nation to pursue a state-level solution to address this issue.

The FCC voted Thursday to repeal net neutrality rules. The vote was 3-2.

Following the vote, Ferguson announced that he intends to file a lawsuit along with other attorneys general challenging the decision.

“We are 5-0 against the Trump Administration because they often fail to follow the law when taking executive action,” he said in a statement. “There is a strong legal argument that with this action, the federal government violated the Administrative Procedure Act — again. … Allowing internet service providers to discriminate based on content undermines a free and open internet. Today’s action will seriously harm consumers, innovation and small businesses.”

In a post on Medium, Inslee’s office said, “While the FCC’s vote will preempt states from ensuring full net neutrality, there are a number of steps that can be taken at the state level to promote an open internet and strengthen protections for consumers.”

Inslee’s proposal would include “pursuing the following actions,” it said.

Hold companies to their commitments not to block websites, throttle speeds, or impose prioritization pricing

Hold companies accountable for warranties made to consumers

Inslee wrote a letter expressing concern with FCC Chairman Ajit Pai’s plan to repeal net neutrality last week, saying “Net neutrality principles ensure large corporations are never in the position of deterring innovation, obstructing entrepreneurship or disenfranchising citizens. They are essential to preserving the very foundation of the internet as we know it, while enabling digital innovation in Washington State and across the country to grow unbridled by corporate interference. Unfortunately, the Commission’s draft order undermines these core principles and for the first time allows broadband providers — rather than the marketplace — to pick the winners and losers in the 21st century economy.”

Inslee was recently elected chair of the Democratic Governors Association. It remains to be seen if the other 15 states with Democratic governors will follow Washington state’s lead.