We Are America: Election Reflections from a Millennial

Reflections on the election—and the protests—from a millennial 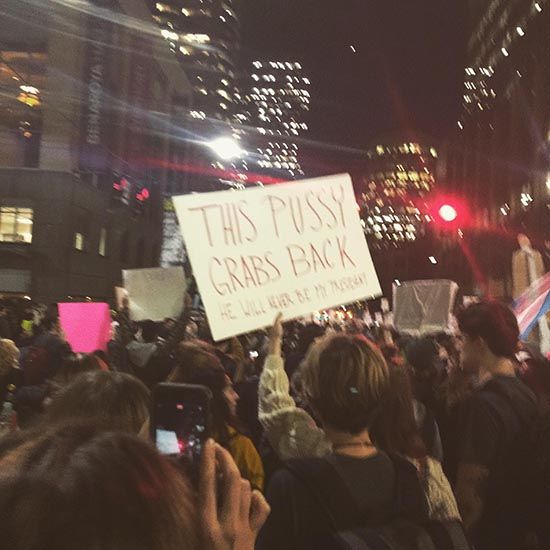 I was eight the first time I voted. It was 2000: Bush vs. Gore. In my elementary school gym, flimsy voters’ booths stood like shrines and quiet people waited to make their offerings.

I remember how my dad’s eyes flitted over the ballot. Left, right, left, right. He picked up a freshly-sharpened No. 2 pencil and began filling in small ovals, answering my questions softly. Finally, he handed me the pencil and had me darken the space next to “Al Gore.” I colored slow and steady.

As we exited the booth, volunteers handed out star-studded “I Voted!” stickers and lollipops. I remember that sacred sweetness on my tongue, and the sticker of democratic faith stuck to my tee-shirt for all to see. I wasn’t raised religious—this was my first communion.

As we know, Gore did not win. Bush did, and less than a year later came 9/11, wars in Afghanistan and Iraq, countless casualties, a rise in xenophobia. I remember the “Buck Fush” bumper stickers and the monkey caricatures. I was only a preteen, but I thought, “should we be laughing?”

I’m thinking the same thing now. We spent too much time making Trump into a social media meme, and not enough taking him, his followers and the pervasive apathy of our country, seriously. After all, nearly half of eligible voters didn’t turn out to the polls.

“We had such a ‘meta’ attitude toward everything this election. Everything was snarky [internet banter],” said 23-year-old Hannah Wertzberger. “Everyone refused to take things seriously until it was too late.”

Wertzberger and her friend, Marley McCaughy, convened last Wednesday at Westlake Park, where the city’s large anti-Trump protest took place. It was just too hard to stay home, they said.

“I am so disgusted. I’m so terrified as a woman. I mean, I made an appointment to get an IUD tomorrow because it might not be possible for much longer,” Wertzberger said.

I’m disgusted too. It will be millennials like me, 55% of whom supported Hillary, who will have to contend with the lasting effects of a Trump presidency.

But it was also millennials like me who came out in droves to protest Trump’s win. Along with Chicago, Oakland, Portland, Los Angeles and others, Seattle had its own, youth-powered protest on November 9th.

At Westlake Park that night, protest organizers behind bullhorns spoke about what Trump’s presidency means, especially to the Dakota Access Pipeline and the Black Lives Matter movement. Many of us cried, hugged. I sat next to two young queer men, one of whom was holding the other’s shoulders, consoling him. “It will be okay,” he murmured. Will it? I thought.

When we took to the streets with picket signs, I chanted beside a group of young Muslims. As we yelled about the importance of black lives, a white Christian evangelical barged in with a tall sign, shouting “Jesus Matters!” One of my Muslim friends turned and shouted back, “This is not a competition!”

“Trump doesn’t represent America. We are America. If you hate Americans you are destroying America,” said Rubveyda Slim, an American Muslim of Somali-Yemeni descent who marched in the protest. “I’m terrified of how people are going to treat me now.”

Attending with her family, protester Iren Fabian said she’s most disturbed about how her ten-year-old son cries when he sees Trump on television. “He calls him a bully. He’s afraid of him,” she said. Both Iren and her husband, Bela, are Hungarian immigrants. After a long road to citizenship, the Fabians don’t understand why almost half of the population didn’t vote. “I’m so disappointed…I worked hard for that right,” Iren said.

I voted even though I was never thrilled about Hillary Clinton. Like so many millennials, I was a fervent Bernie supporter. But I didn’t let that keep me from exercising my democratic right, especially with someone as legitimately terrifying as Donald Trump on the ticket.

A few weeks before election day, I ripped into my official envelope, leaving the opening jagged. I threw it onto my desk and ignored it for a few days, exhausted from this loud, aggressive, contentious election. Eventually, I scribbled the bubble beside Hillary Clinton’s name. Finally, I thought, Trump would be consigned to unpleasant history.

Since, there have been no patriotic stickers, no candy. Early on the morning of Nov 9th, 2016, sitting at the bar where I’d hoped to celebrate the first woman president, I tearfully called the person who introduced me to democracy all those years ago. “I’m so sorry, sweetie,” my dad said, on the verge of tears himself. “How we could’ve left all this to you…” As he trailed off, I thought about that election day in 2000, how he held my sticky little hand, how he asked, “what’d you think?”

What do I think? Since my eighteenth birthday, I’ve shouldered the right to vote with great care and hope for the system. I’ve been optimistic, I’ve looked for civility in politics, I’ve teased out silver linings. With the election of Obama, I thought our country was growing, and moving towards progress.

But Trump, in one brutish slap, has robbed me of such sweet naivety. I’m not that awe-inspired eight-year-old girl anymore, and I can’t afford to be. Not now, as it becomes clear that my rights as a woman—along with the rights of my friends of different races, religions, gender identities and sexual orientations—are extraneous to Trump and those who elected him. I feel my own democracy has abandoned me. How can I pass this truth down to future children?

I’m clawing for answers to that question, and I don’t think I’m going to find it on Facebook. Instead, I caught a glimpse of it last Wednesday, at Westlake, surrounded by picketing Americans, fighting for a country to believe in again.

Alexa Peters is a Seattle-based writer who has contributed to the Seattle Times, Seattle Weekly, Amy Poehler’s Smart Girls and other outlets. You can find more of her writing at: itsallwritebyme.com